The 2022 Jeep Cherokee dropped all but one front wheel drive configuration, raised the specs of the base model, and eliminated the 2.4 liter four-cylinder.

Why is there still one front drive version? Most likely to keep the 31 mpg advertised highway mileage, which is much tougher to achieve with four driven wheels. Dropping the 2.4 is also easy to explain. It was often criticized by reviewers as being too weak for the Cherokee, but many owners felt its 180 hp was good enough. Regardless, the Cherokee now comes with a standard V6 and an optional 2-liter turbo; the latter has  AWD fuel economy matching the old 2.4, even if the FWD mileage is slightly lower.

Just two vehicles still use the 2.4: the Jeep Compass and, often overlooked, the Ram ProMaster City.  When will they also move to newer engines?

For the Compass, Jeep might be looking to install the rumored 1.5 liter turbocharged four-cylinder to boost horsepower and torque and possibly increase economy ratings. The Renegade has already moved to a 1.3 liter turbo with 177 horsepower and 210 pound-feet of torque—a little engine which beats the 2.4’s output, but at two costs. There is a bit of torque delay (albeit better than the old 1.4 turbo), and premium fuel is recommended. In addition, using the 1.3 turbo in the Compass could make them too similar. The 1.5 could be tuned for regular fuel (as the 2.0 is), with the added displacement compensating for the loss of compression.

Using the 2.0 turbo in the Compass could be possible, making it something of a rocket; the 2-liter turbo has higher output  than the 3.2 liter V6 which is now the Cherokee’s base engine—on regular gas. That might make the Compass a bit too much of a competitor for the Cherokee; but they could switch the Compass to a two-engine setup, with a base 1.5 and optional 2.0. This may be waiting for the Indiana engine plant to ramp up. 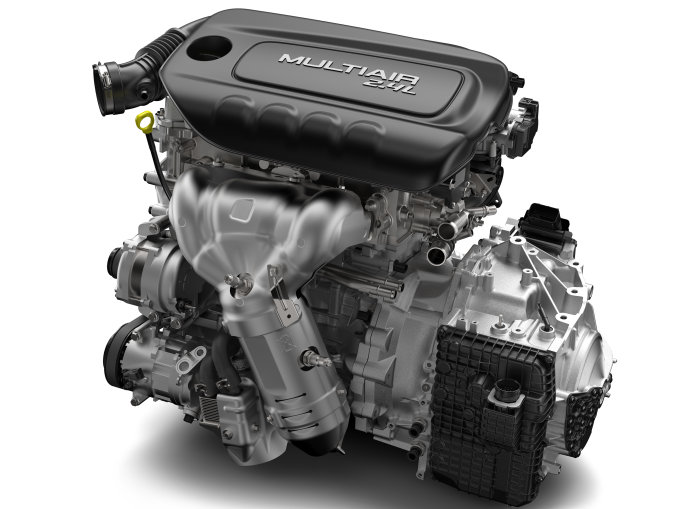 The ProMaster City may be a bit tougher, since fleet use is harder on turbocharged engines and there is more price sensitivity. Heat is much harder on a vehicle that spends a great deal of time stationary with the engine idling.

The 2.4 may be missed by some, but most think of it as it was in the Dodge Caliber—underpowered at low revs and coupled to a CVT that made it sound remarkably like a sewing machine. The TigerShark retune, better transmissions, and added sound abatement made the 2.4 far better, but the damage had been done.

The 2.0 was developed by both Chrysler and Fiat, using technologies developed in the United States, Italy, and Brazil. Coupled with a hybrid system, the 2.0 is also the core of the powerful and economical 4xe setup.

The factory connection. The 2.4 liter engine is made at the Dundee (Michigan) plant; the 3.2 in Michigan; and the 2.0 in Trenton (Michigan) and in Italy, with Kokomo gearing up to pump out many more. The 3.6 liter version of the Pentastar V6 is made in Trenton, Dundee, and Saltillo, Mexico.

Rumor has a new inline six-cylinder, which will reportedly be shown in April at the New York Auto Show, but this is to be made in Saltillo, Mexico; a second line might be added to another plant. This engine seems unlikely to reach the Cherokee, at least in the current generation. Stellantis generally does not comment on future plant utilization, so whether anything will replace the 2.4 in Dundee is a matter for speculation—or guesswork. Trenton is not being used to capacity at the moment, and the company is also planning electric motor and battery production in the United States.