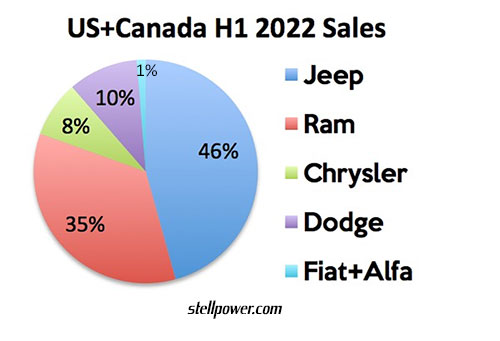 FCA US’ market share has increased in the first half of 2022, as competitors lost more ground than Stellantis’ US group.

So far in 2022, every automaker other than Tesla and Polestar has lost sales, in some cases by rather serious margins (Nissan dropped by 32%, for example). The former Chrysler brands, coupled with slow-selling Fiat, Alfa Romeo, and Maserati, dropped by about 15% in a market which dropped by 18.5%.

Among the Stellantis brands, in order of U.S. sales, we have:

Among the major automakers in U.S. sales, we have:

These are in line with past Chrysler sales standards, going back to the 1960s. Average transaction prices above those of GM and Ford are unusual, though.