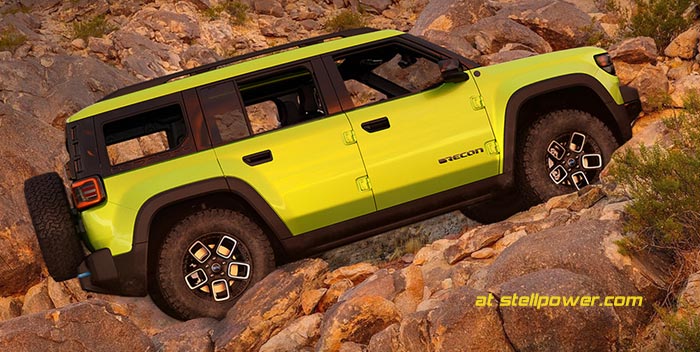 Many years ago, AMC developed a replacement for its revolutionary “XJ” Jeep Cherokee, which had the body code “ZJ.” After Chrysler bought AMC, company leaders realized they could have both versions, and they produced the new model, which was more luxurious than the original, as the Grand Cherokee while keeping the Cherokee going.

Today, Jeep makes the Wrangler, one of its most popular models along with the Grand Cherokee. Jeep also just unveiled the 2024 Recon, coded EJ, prompting some speculation about how they plan to fit both models into the lineup.

It’s not obvious, but there are definite differences between the two vehicles. The Wrangler has solid axles, while the Recon has an independent suspension. The two-door Wrangler is also compact in size, though its blocky styling and narrow width—an intentional move to provide greater mobility between trees or rocks—tend to make it seem longer than it really is. The Recon, on the other hand, is nearly the size of the Grand Cherokee. 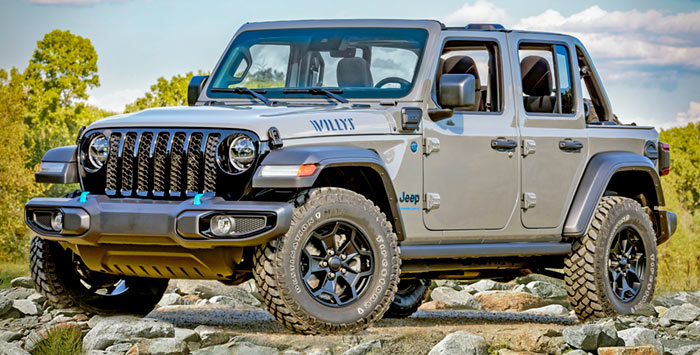 These two factors tell us where the two vehicles are going. The Recon can tackle the Rubicon Trail, according to Jeep; but it’s likely going to be far more civilized on the road (and for that matter off-road) due to its independent suspension. Its size means it won’t be able to go everywhere the Wrangler can, but it will still be a master of most off-road settings, and it can carry more people and gear in much greater comfort. More to the point, the Recon can counter the Ford Bronco to a large degree. Thus, there will still be a battery-electric Wrangler, and the Wrangler is not going anywhere as long as it’s supported by sales. 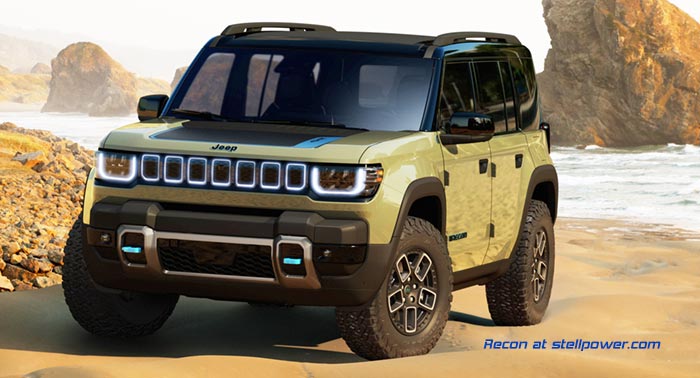 The Wrangler will have a place for the most extreme environments, and for relatively easy aftermarket modifications; the Recon will have a place for somewhat less extreme off-roading, possibly still ahead of most competitors’ best capabilities,   but far more practical in day-to-day driving for most people and certainly more comfortable. The two will likely have similar price ranges despite their very different technologies.

There’s room for both Recon and Wrangler in Jeep’s portfolio; making both at once is a stroke of genius.

Now Jeep needs to offer something along the shape of the Recon but in Cherokee size. But with a little more cargo space. Perhaps even a version with a mini-bed. The Gladiator is too big.

Recon is going head to head with the Ford Bronco . in the upper photo shown .

Jeep is smart to keep both lines going. California and Europe are not saying that hybrids will be fine. Only the Recon will do. Elsewhere, the new 4xe models might be permitted, or 392’s. Jeep is ready anyway the wind blows. Hydrogen has been the solution, right around the corner, since the ‘60’s. The Recon can go fuel cell and the Wrangler can go reciprocating piston hydrogen or natural gas.

Really think a hybrid Recon should accompany the electric version. All electric is too niche to counter the Bronco. Jeep Recon must attract a broader audience in today’s marketplace. If not, it’s simply a statement of corporate thinking and correctness optics, not a viable product to be a realistically sold to the general public. What a potential lost opportunity for Jeep.

A hybrid would not work—the body is optimized for BEV. Fuel cell may become available if needed. If you want a hybrid, get a Wrangler. It’s kind of like when they released the Reliant, if they’d made it compatible with a V8, it would have been too heavy for the four-cylinder and less space-efficient. It’s better to design for either EV or gasoline, not both.

I’m wondering what it means for the Cherokee. I have a feeling Recon may be its replacement.