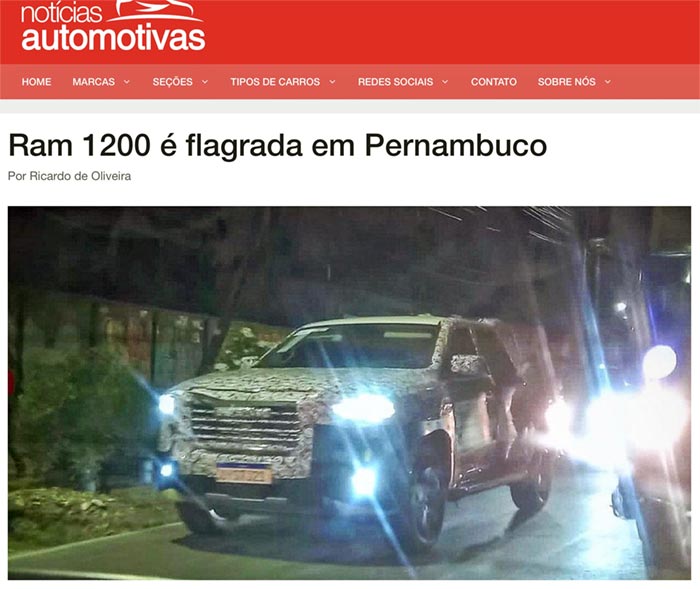 Gabriel Henrique spotted the Ram 1200 in Pernambuco, wearing a very thin disguise which might or might not include padded fenders and a massive, oversized grille. He published the photos on the Pernambuco Exóticos channel, where they were picked up by Notícias Automotivas.

Notícias Automotivas wrote that this unibody vehicle will be more than 5 meters long and positioned against the Ford Maverick. They believed that the Jeep Compass-based vehicle would be made in Toluca, Mexico, for the United States, Canada, Mexico, and possibly South America. It will be powered by the 2.0 turbo engine and ZF nine-speed automatic, with optional all wheel drive. They also expected a plug-in hybrid to go up against Hyundai’s Santa Cruz. For Mexico and South America, the site expected to see a diesel.

My hope would be that the Stellantis Brand would not disrespect the Dakota name like that. It should be an STLA large platform vehicle designed to be more in line with the Ford Ranger, Chevy Colorado/GMC Canyon, Toyota Tacoma and Honda Ridgeline. The 2.0L 4XE powertrain (370hp/475tq) should be standard with both Hurricane-6 engines as options.

Might as well throw it under the Jeep brand in the U.S. as the new Scrambler. Or, make another Native American tribe mad and bring back Comanche.