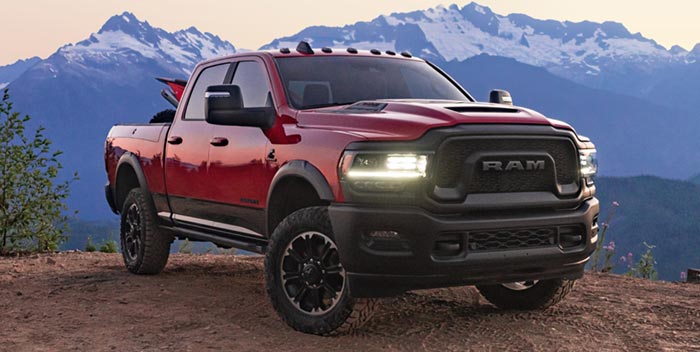 Ford crowed over its ownership of big trucks and another year of the F-series being the top-selling nameplate. GM bragged that it was the top selling big pickup maker. Where was Ram, the only company selling two different generations of pickup, in all this?

First, let’s look at the GM-vs-Ford numbers. As so often happens, both sides are right: Ford’s F-series had 653,957 sales, down 10% from last year, which clobbers the Silverado’s mere 523,249 sales, down 1%. But the GMC Sierra is just a higher-end Silverado; it’s like looking at the 1990s Dodge Caravan while ignoring the 1990s Plymouth Voyager. Put Sierra with Silverado and you get a hefty 764,771 GM big pickup sales. That’s impressive. Yes, GM sold more big pickups than Ford, and Ford sold the most of any single brand pickups.

Meanwhile, Ram followed in third, as it usually does, with 468,344 sales, down by 18%. That’s well below Chevrolet, albeit ahead of GMC. It was not a good year for Ram pickups, though chances are that was more due to supply constraints than customer desires.

Toyota, incidentally, had 104,246 Tundra sales, with the new model getting some attention; sales were up by 27%.

There are of course other trucks. Jeep sold a surprising 77,855 Gladiators, down 13% from 2021 sales; but it’s surprising sales are steadying so high when industry analysts expected just 40,000 sales, and at lower transaction prices. Ford sold 57,005 Rangers and 74,370 Mavericks, albeit at much lower prices than the Gladiator. GM sold 89,197 Colorados and 27,819 Canyons. Toyota, as usual, dominated compact/medium pickups with 237,323 Tacomas—and that was down by 6%.

Ram’s electric pickups are going to be revealed around late March/early April, and the jury is still out on when (and if) Ram will adopt the Hurricane Six to replace or supplement the Hemi V8s. Supply chain disruptions and economy changes are uncertain, as well. 2023 will be an interesting year.

I appreciate all this information, and look forward to when the Revolution will become a production truck.
Thanks again for posting this valuable information.

Finally, I can comment! I know that everyone missed me.

Thank you! You’re too kind.

It looks like Ram is generating enough sales to be profitable and continue to be a leader in the market, if not the sales heavyweight. I wonder what percentage of Ford and GM sales are fleet sales and whether that makes a significant amount of the difference?

Use the Disqus box to weigh in with your thoughts! (It may take a moment to appear)
wpDiscuz
6
0
Would love your thoughts, please comment.x
()
x
| Reply