I recently spent a week driving the 2021 Jeep Wrangler Rubicon 392 with the Xtreme Recon package. My first seat time with the Xtreme Recon-equipped 392 Jeep was an off-road test session during which time I found it to be the most capable production vehicle that I have ever tested – and I tested the new Ford Bronco with the Sasquatch package at the same off-road park. If you want the best turnkey off-road vehicle on the market, there is no question that the Jeep Wrangler Rubicon 392 Xtreme Recon is the one. 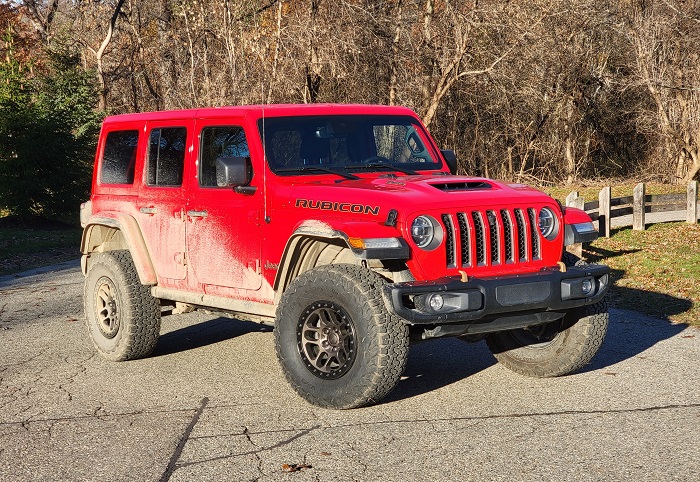 The combination of the lifted suspension, the 35-inch BFGoodrich off-road tires and the 470-horsepower Hemi allow the Wrangler to check every box when it comes to being the best factory off-road beast, but the vast majority of buyers don’t just use them for mud toys. The Wrangler is a popular daily driver and the Rubicon 392 has quickly become a top option among those Jeepers who have been longing for V8 power, but how does the best off-road SUV on the market perform during normal on-road driving? 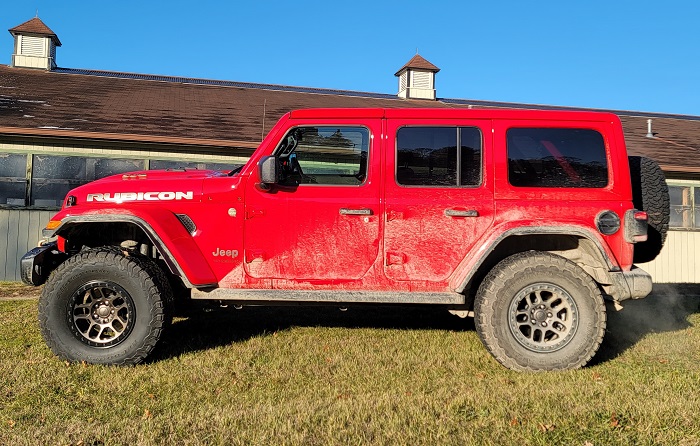 In short, the Wrangler Rubicon 392 with the Xtreme Recon package is so good that just about everyone who is ordering one of these V8-powered models should add this option. Buyers who already plan to swap to different wheels and tires, followed by other, more intense modifications may want to go without it, but anyone who wants the lifted look without shopping for a wheel-and-tire package that fits correctly should absolutely add the Xtreme Recon package to their Wrangler Rubicon 392.

If you are not familiar with the Xtreme Recon package, it is available for a few different trim levels, including the low priced Willys model. For the Rubicon 392, the Xtreme Recon package is centered around the 35-inch BFGoodrich All-Terrain KO2 tires on 17-inch beadlock-capable wheels. This wheel-and-tire package looks huge, giving the Rubicon 392 a modified look while also affording it the the best underbody clearance numbers in the industry. These tires make the Wrangler more capable, but they look pretty badass, too. 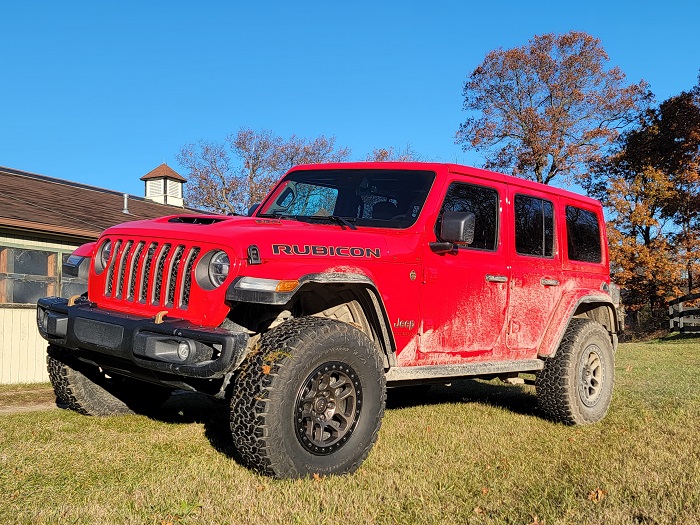 During normal driving, you won’t encounter many places where you need the approach angle of this Jeep, but to see how well it climbs in loose footing, I attacked a large pile of arena footing at my farm. As you can see, it is a large pile of loose sand with very little ramp-up (image below). My Ram 1500 front bumper hits the sand before the front wheels get to the pile, but the Wrangler effortlessly drove right up onto the pile in 4-high. The loose footing was no issue, nor was the overall height of the pile, and if not for the barn being so close on the other side, I am confident that the 392 Xtreme Recon could have climbed right over to the other side.

Next, To carry the larger, heavier spare tire of the Xtreme Recon package, a Mopar reinforced swing arm has been added to the rear gate. The shocks are the same as the non-Xtreme Recon models, but they are retuned for the larger tires, while 4.56 gear sets help maintain the stunning acceleration of the 392 models even with the bigger meat at all four corners. 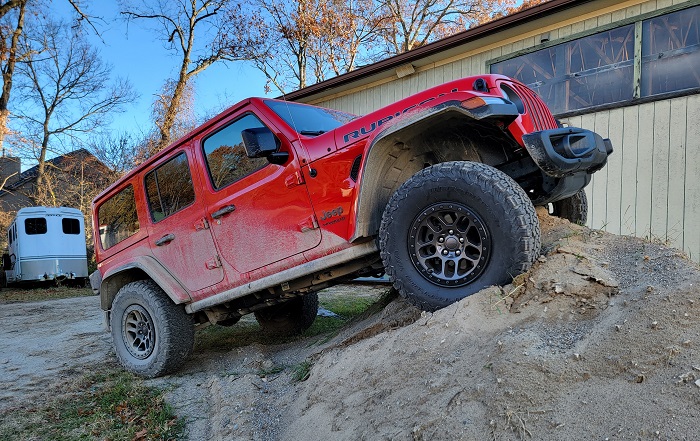 Finally, the Xtreme Recon package adds very subtle extensions to all of the wheel openings, helping to keep some of the mud and debris off of the body. As you can see in my pictures, they really don’t help much, but in areas with tire fitment laws, these will prevent you from being ticketed for your tires extending out beyond the edge of the body.

I currently own four vehicles – all Mopars and all powered by a V8 engine. Needless to say, I was pretty excited for the arrival of the long-awaited Wrangler 392, but it is much better than I had expected. It is insanely quick and it sounds wonderful, while maintaining the driving characteristics that make the Wrangler line so popular with loyal buyers. Having a Jeep Wrangler that will beat just about anything up a steep, muddy hill that will also beat most muscle cars in a short stoplight sprint makes the Rubicon 392 one of the most interesting vehicles on the market. The Wrangler has always been remarkably capable, but it was never particularly quick or fast. The 392 fixes that and with its arrival, I have a whole new love for the legendary Jeep. I was clear with my initial review that the Rubicon 392 was my favorite Wrangler ever and the best SUV I had tested when it comes to combining on-road comfort with off-road capabilities. 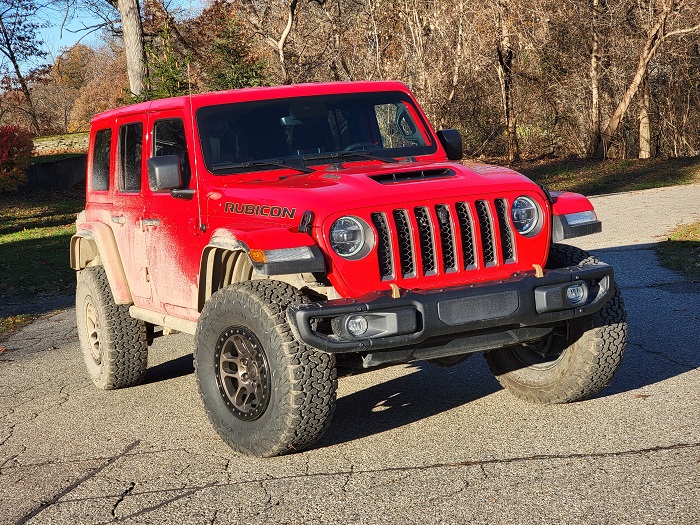 As it turns out, the Xtreme Recon package takes each of those attributes and improves on them. As mentioned above, the 35-inch BFG tires make the Wrangler the most capable off-roader on the market, but those meaty sidewalls also make the Rubicon 392 smoother on paved roads. The paved roads in my area are newer and in pretty nice shape, so there arent many bumps to face, but the few inconsistencies in the surface are unnoticeable under the huge Xtreme Recon tires.

The only place where the Wrangler Rubicon 392 Xtreme Recon doesn’t beat pretty much everything on the road is when it comes to cornering. With the big tires and the Rubicon 392 ride height, the center of gravity is very high and you can feel that on sharp turns. I don’t want to suggest that the high-riding Wrangler feels unstable, but with the play in the sidewalls of the tire, you can feel the tires being stressed on hard turns. It clearly isn’t designed to offer world class handling on paved surfaces, but anyone who wants to daily drive a lifted Wrangler should expect that. It handles beautifully under normal driving circumstances, but Rubicon 392 Xtreme Recon owners shouldn’t be whipping around and tight turns on paved roads.

There are also a great many unpaved roads in my area – the state calls them “Natural Beauty Roads”, but in the fall, they are anything but beautiful to most drivers. The combination of rain and snow, freeze and thaw with heavy traffic leads to many deep rut, grooves and potholes that force many vehicles to drive well below the posted 35mph speed limit. With most vehicles, if you tried to go 35 miles per hour down most of these roads, you would damage the wheels, tires, suspension or a combination of the three, and that includes some smaller trucks and SUVs. These roads are brutal enough that during the transition from fall to winter, many people avoid them because they are so rough. Of course, since they are dirt, they are also sloppy, with some sections washed out by flowing mud in low-lying areas. 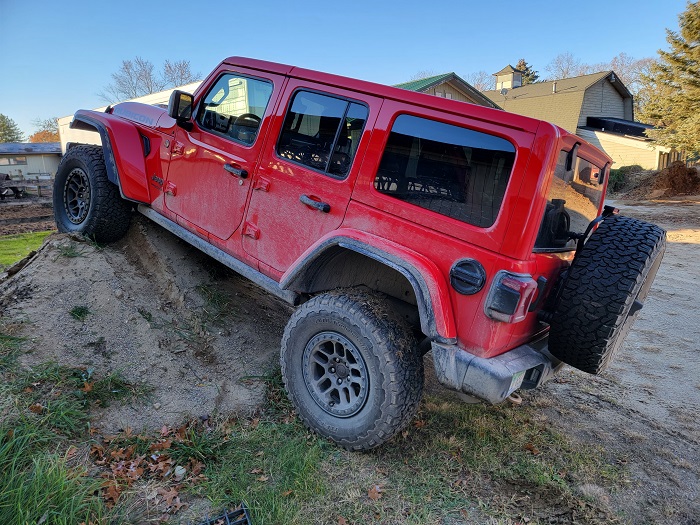 These roads will literally destroy some vehicles, but the Wrangler Rubicon 392 Xtreme Recon didn’t break a sweat, even when traveling at the posted speed limit. With some SUVs that claim to be off-road-ready, hitting some of these bumps and ruts at speed will cause the vehicle to bounce, often leading to the vehicle straying from its intended path. Some ruts are hard enough that they essentially jam up on tire, causing the vehicle to slightly pivot on that tire, causing the front end to point away from the road. That never happens with the Rubicon 392 Xtreme Recon, even when hitting the hardest bumps at higher-than-recommended speeds.

Even in sections that were badly torn up from large construction traffic trucks, the Wrangler 392 with the big 35-inch tires easily glided through without any problem. There is no bouncing around and no need to fight with the steering wheel over the rough sections and when you get to the sloppy mud, all 470 angry ponies are happy to dig their way to the other side with a healthy roar.

There is only one area in which I didn’t absolutely love the Jeep Wrangler Rubicon 392 Xtreme Recon and that is a long highway drive. As you can imagine, the Wrangler is not particularly aerodynamic and my long drive was made during a nasty thunderstorm with heavy winds. The wind pushed the Wrangler around a great deal and the meaty sidewalls of the 35-inch tires don’t help any, so when going 70 on the highway in hard winds, I found myself doing a whole lot of driving. 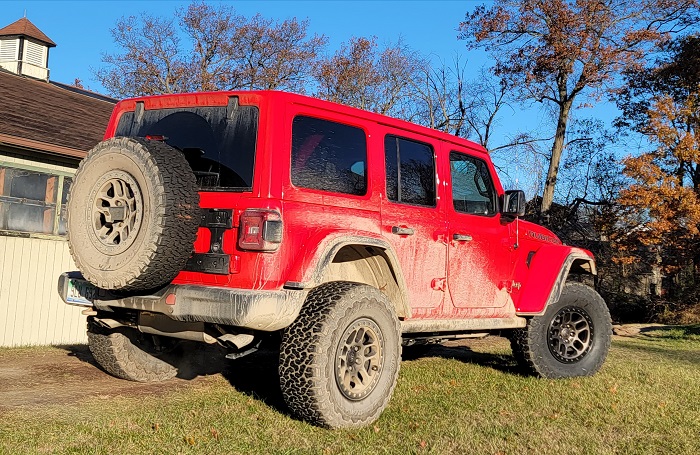 One of the charms of the Wrangler driving dynamics it that you constantly have to keep is centered in the lane, as they all tends to “wander” a bit. When you add the lift, the 35-inch tires and heavy winds, that wandering is magnified quite a bit. That being said, when I drove this wicked Wrangler on the highway on a clear day, it was really no different than any other Wrangler Rubicon. The big tires do smooth out the ride on the highway as well, but overall, this is not a vehicle that I would pick for a 30-mile daily commute on the highway. It is not unsafe, but it requires a bit more driver effort than I like in my daily driver.

However, that little bit of extra effort on the highway doesn’t prevent me from comfortably calling the Wrangler Rubicon 392 Xtreme Recon my favorite Jeep and favorite off-road SUV ever. Aside from highway driving in high winds, the 392 makes this Wrangler an absolute blast to drive on-road and off while also serving as one of the best sounding stock vehicles on the market today. Add in the Xtreme Recon tires and you have a smoother ride and even greater off-road capabilities along with a bit of an aftermarket look with the big ride height.

The Jeep Wrangler Rubicon 392 Xtreme Recon is the perfect vehicle for someone who wants a comfortable daily driver that can also out-perform just about anything off-road. 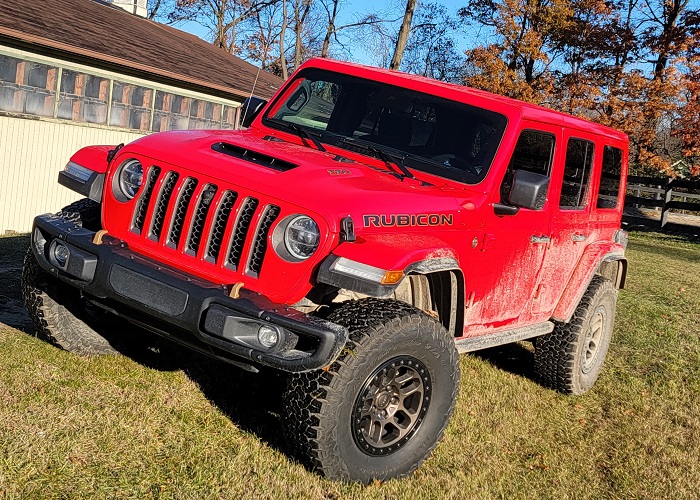 If you are ordering a Rubicon 392, the Xtreme Recon package is a must-have for anyone who doesn’t plan to swap the wheels and tires, as there is no other downside to this relatively simple upgrade package. Ultimately, with a base price of $74,395, adding $3,995 to the Rubicon 392 for the wheels, tires, suspension tuning, gears and other bits is a small price to pay for the resulting vehicle.