This is part 5 of my review series of the 2021 Ram 1500 TRX. If you missed the first part, explaining why we are doing a review series and looking at the one downside to the TRX, click here. If you are familiar with the series, here is a look at how the quickest, fastest and most powerful production truck ever handles my standard horse trailer. 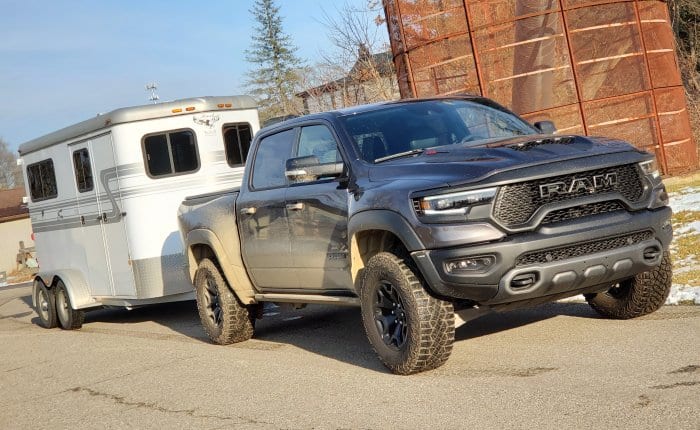 Putting the TRX to Work

While I understand fully that the 2021 Ram 1500 TRX was not engineered to be a work truck, the odds are good that some of the folks who ordered one will use it to pull a trailer. The TRX has a towing capacity of 8,100 pounds, so if you plan to pull a car trailer, you are going to need a fairly light car-and-trailer combo. For instance, if you have a 4,500-pound Hellcat Challenger, you will need an enclosed trailer on the lighter end of the spectrum to remain under the rated limit. For some of the folks reading about TRX towing for the first time, the towing capacity may seem low for a truck with so much power, and it is, due to the high performance off-road suspension setup. I will go into far more detail below, but in short, the TRX will pull a car on a trailer, but the towing setup will likely be near the capacity of the Hellcat-powered Ram.

On the other hand, my two-horse, 5,500-pound horse trailer is ideal for the TRX and it just-so-happens that a two-horse trailer is one of the most common trailers used by American truck owners. Back when the Ram became its own brand a decade ago, the team conducted a survey of truck owners. They found that most truck owners who regularly pull trailers typically use vehicle trailers or horse trailers. Since vehicle trailers are a bit too heavy for some vehicles, especially midsized trucks and SUVs, I have used a standard two-horse trailer for all of my towing tests. The trailer itself weighs a touch over 3,000 pounds while my champion show horses add another 2,400 pounds for a total of roughly 5,500 pounds. Over the past 10+ years, every truck and SUV that can pull a trailer has been hitched to my standard two-horse trailer. 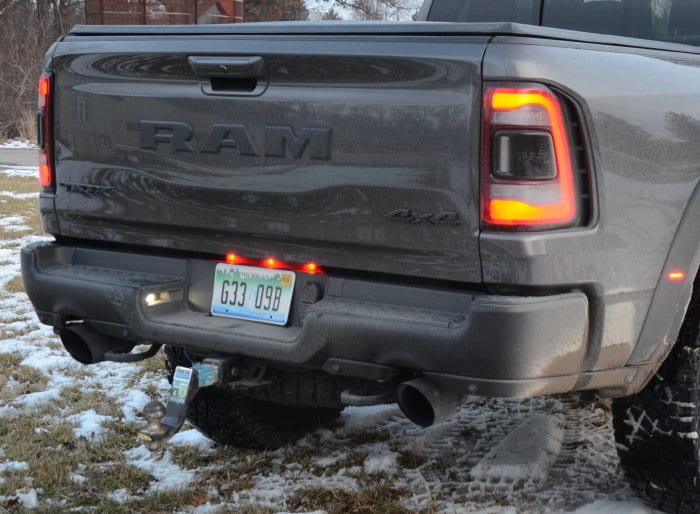 No vehicle has pulled my standard trailer as effortlessly as the Ram 1500 TRX.

Hooking Up the Trailer 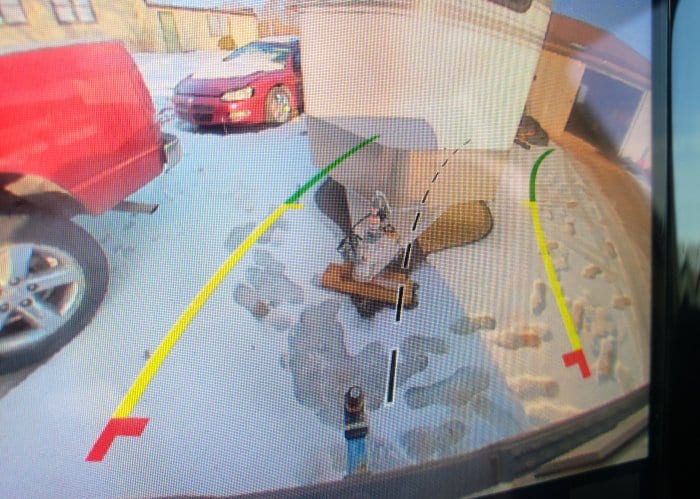 Once I had the hitch in the receiver in place, I backed up to my trailer using the Ram rearview camera system. This system, shown below, has a system of lines that moves as you turn the steering wheel, showing you where you will end up with the current steering angle. This makes it very easy to back up to the trailer, even at an odd angle. Also, the camera location in the tailgate makes it a breeze to get the hitch in place under the trailer. Once the trailer is on the ball, the TRX has a 7-pin plug for the trailer lights and braking system, along with the standard connection points for the emergency chains.

The Ram 1500 TRX is available with the integrated trailer brake controller system as part of the Level 2 Equipment Group, and it is a great system. It includes easy adjustment of electric brake force and a manual brake switch on the dash, along with a gauge of sorts with the gain level and brake force percentage in the driver information center. I like to use the manual switch at low speeds to get a feel for how the brake controller of the truck works with the brakes on my trailer, setting the brake force prior to loading the horses. I found that in this case, a setting of 5.5 worked best for my trailer, but owners should figure out what gain level works best for their trailer. 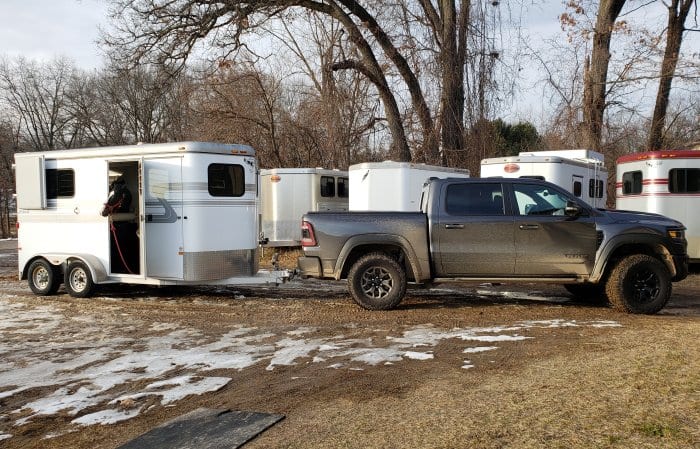 Once I had the trailer brakes adjusted to my liking with the empty trailer, it was time to load up the horses. Our thoroughbred race horses-turned-show horses were the lucky passengers and I believe that these two – Silver Chief and Mileva – were the first two horses in the world to be pulled behind a TRX. Perhaps the folks from the Ram brand did some towing tests with live horses, but I haven’t seen any of that, nor have I seen any other reviewers working with live animals – likely making our two gorgeous thoroughbreds the first horses to go for a ride behind the TRX.

As you can see in my pictures of the Ram 1500 TRX in my parking lot, there is a slight bit of rearend sag with the trailer weight. While it is visually noticeable, it did not affect the way that the truck handled with the extra weight out back. I have towed this horse trailer for thousands of miles with dozens of different trucks and SUVs over the past decade and with some vehicles, having the back end pushed down will cause some adverse steering issues, but this was not one of those cases. The TRX steering felt no different with the trailer than without, so I don’t believe that the slight drop in the rearend is anything to be worried about.

As you might imagine, I was not making hard pulls with two horses in the trailer behind the TRX, as that wouldn’t be safe for the animals. However, I can confidently say that the Hellcat-powered half-ton accelerated more effortlessly than any truck or SUV that has ever pulled my test trailer. With 702 horsepower and 650 lb-ft of torque on tap, you barely notice the extra 5,500 pounds out back when gently accelerating to the speed limit of 50 miles per hour. For safety’s sake, I try to avoid highway driving with live animals, so in testing the TRX’s towing abilities, I made a 20-mile drive through the country to a nearby farm to drop the horses off for a show. The speed limit was 50mph pretty much the entire way, with lots of narrow, twisty roads and a few slight hills along the way. At no point did the TRX have to really work to maintain that speed, even on the steepest hills. Moving the weight is clearly no issue. 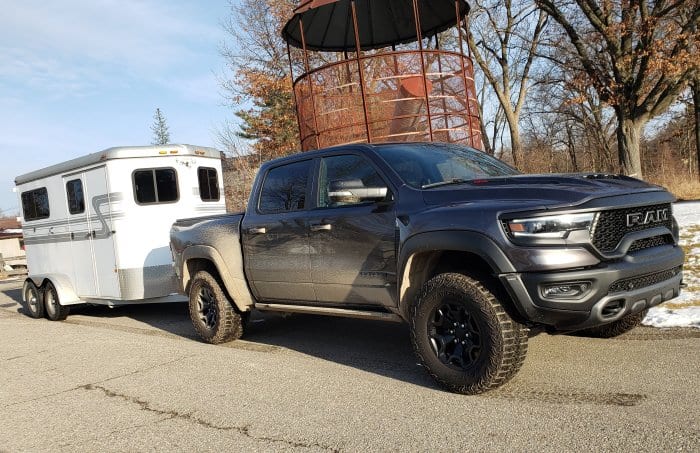 The suspension setup is the limiting factor with the towing capacity, and the adaptive, adjustable Bilstein damper system is intended more for high performance hijinks than handling a heavy load. However, the TRX handled very nicely with the extra weight out back. While I was obviously driving gently with live cargo out back, the supercharged Ram was steady and stable through the tightest turns, without any feeling of bouncing in the back end. Some half-ton trucks with very smooth suspension systems will almost create the feel of a boat cresting repeated waves while cruising on a road with slight bumps, but the TRX handled every road surface without any issue. The suspension setup might be a limiting factor in the maximum towing capacity, but it doesn’t hurt the towing functionality, as I wouldn’t hesitate to pull my horses to every show behind the supercharged Ram 1500.

The braking system of the Ram 1500 TRX has been criticized because, unlike the other Hellcat-powered Dodge and Jeep models, the TRX does not feature a high performance Brembo braking system. Instead, the TRX features the max tow braking system from the rest of the Ram 1500 lineup and in very specific, very extreme conditions, the brakes have been softer than some reviewers like. I was a bit concerned, as my total combined weight was around 12,000 pounds between the truck and trailer, and some reviewers had braking issues with just the 6,500-pound weight of the truck itself. Towing through the tight, twisty roads with some downhill portions really put the braking system to the test and it performed with flying colors. I don’t know what other reviewers are doing to these trucks to force the braking system to overheat, but I had no issues with my time towing a 5,500-pound horse trailer. 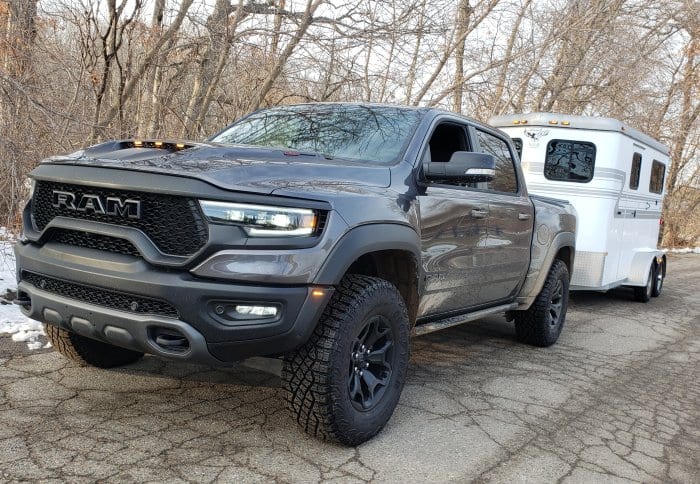 Now, my trailer has its own brakes, so once we got to the other farm and unloaded the horses, I headed back to my stable with an empty trailer. Before doing so, I turned the brake controller gain down to 0, so the truck’s brakes would be doing all of the work with the 3,100-pound trailer out back. Even on a long, steady downhill section where I was riding the brakes pretty hard, the Ram TRX brakes didn’t falter.

With my trailer empty, I also learned that when rolling into the throttle at low speed, the extra 3,100 pounds of the horse trailer barely impedes the acceleration abilities of the Ram 1500 TRX. I didn’t make any hard launches out of fear of ripping my horse trailer apart, but I have little doubt that the TRX will still beat most trucks in a drag race even with a horse trailer connected. 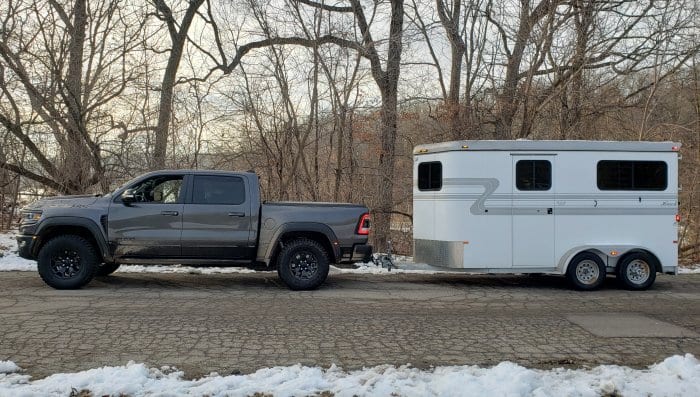 Best of all, the TRX returned roughly 8.4 miles per gallon with the horses in the trailer, which isn’t an awful number for a 702-horsepower truck pulling a 5,500-pound trailer. With the trailer empty and the truck being driven hard, fuel economy numbers dipped down into the 6-7mpg range, but when being driven reasonably, the fuel economy numbers were pretty average for a gas-powered half-ton truck.

TRX Gets an A for Towing

Although the Ram 1500 TRX wasn’t engineered to be a work truck, it pulls my standard two-horse trailer as well as any half-ton truck I have tested over the past decade, and that includes trucks from every major brand sold in the USA. The big power makes short work of moving the extra weight, the suspension has no qualms cornering with the extra weight and, for a braking system that has been criticized, I had no complaints with how it stopped with the loaded trailer out back. 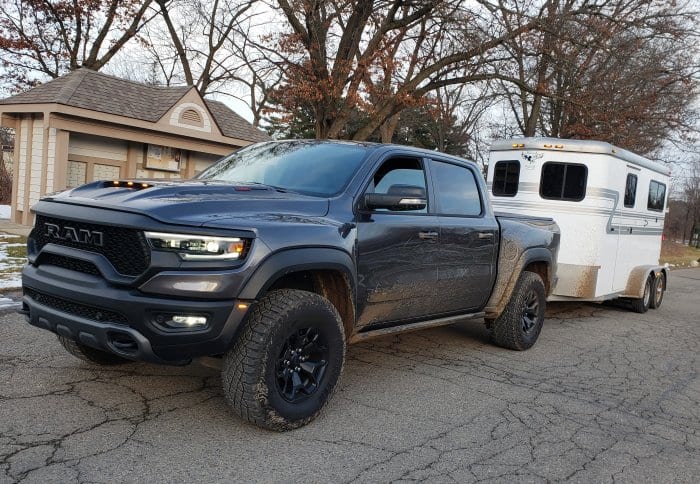 I wouldn’t hesitate to pull my horses to every show with the Ram 1500 TRX, as there is no functional downside to the supercharged half-ton when putting in work. While I imagine that few people bought a TRX to use as a work truck, owners won’t have to worry about pulling a trailer should the need arise. It might be made to race across the desert, but it pulls a common horse trailer as well as any half-ton on the market.