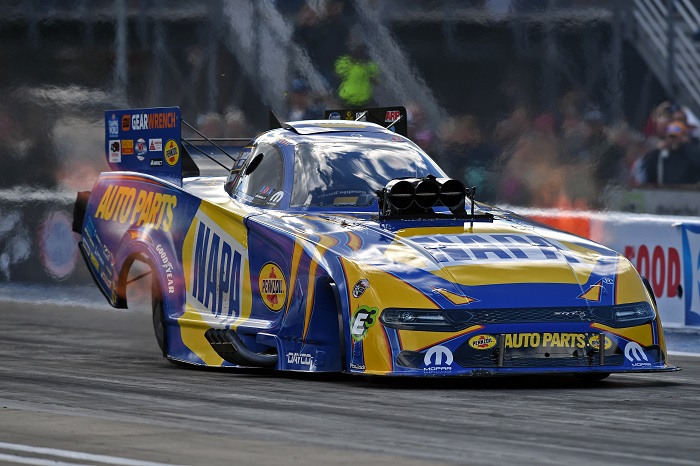 The Don Schumacher Racing Dodge Charger Hellcat funny car drivers came into the NHRA Thunder Valley Nationals in Tennessee holding the top two spots in the championship race with just three events left on the schedule. Matt Hagan sat first, 33 points ahead of Ron Capps, while non-DSR Dodge Charger driver Cruz Pedregon was third, 113 points back. All three of the Dodge drivers at the front of the race for the title had hoped to pull further ahead, but that was not the case. In a rare occurrence, the funny car finals at the Thunder Valley nationals didn’t have a Dodge Charger, a Chevrolet Camaro or a Ford Mustang in either lane – with a pair of Toyota Camrys squaring off for the event win. 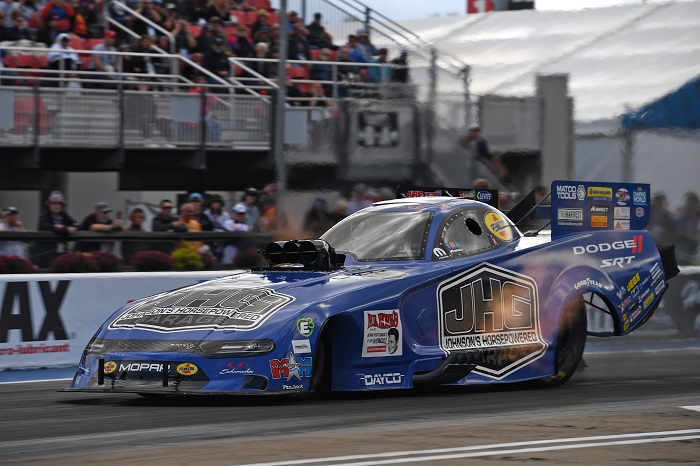 As a result, JR Todd jumped into the third spot in the championship race while Thunder Valley Nationals winner Alexis DeJoria moved into the eighth spot. More importantly, Ron Capps was able to inch ahead of Hagan by just a single point – setting up an exciting shootout for the 2021 NHRA Funny Car Championship.

The Thunder Valley Nationals didn’t get off of the best start for the front-running Dodge Charger drivers. In the first round of qualifying, Hagan and Pedregon both turned in junk runs while Capps only managed a 5.72 at 122 miles per hour. Fortunately, with only 14 funny car competitors on hand, everyone knew that they were going to make it to eliminations. 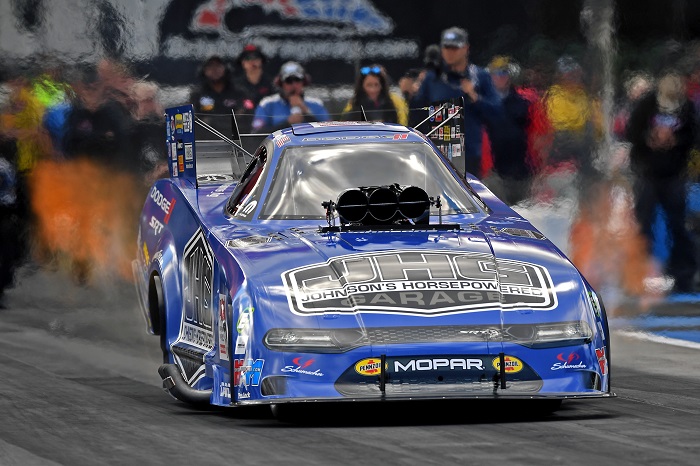 Hagan turned things around in the second round of qualifying, with his Dodge Charger Hellcat Redeye funny car laying down a 3.958 at 330 miles per hour, jumping up into the top spot in the class. Neither Capps nor Pedregon put down a good run on their second attempt, so after Q2, Capps was 11th and Cruz was 14th.

Luckily, in the final round of qualifying, Pedregon ran a 3.975 to get into the seventh spot while Capps ran a 3.945 to jump into the second spot on the ladder. The bad news for Hagan was that Capps and DeJoria both jumped over him in the last round, so Hagan would start in the third spot.

For those wondering, among the key championship contenders in the class, John Force qualified sixth in his Chevrolet Camaro while JR Todd qualified 12th with a 5.703 at 122 miles per hour. The 11th through 14th positions on the ladder all qualified with junk runs and speeds in the 112-139mph range, while the 15th and 16th spots on the ladder were empty.

In the first round of elimination, Capps beat Blake Alexander and Pedregon beat Dave Richards, sending two of the three Dodge Charger drivers who are in the title hunt into the second round. Unfortunately, after JR Todd failed to put down a clean run in qualifying, he ran the quickest E.T. (3.924) of the first round to beat Matt Hagan. Hagan had a good run (3.958), but Todd beat him on the tree and ran the quicker time to get the win. Meanwhile, top qualifier Alexis DeJoria and her Toyota Camry beat Paul Lee’s Dodge Charger, allowing her to advance to the second round. 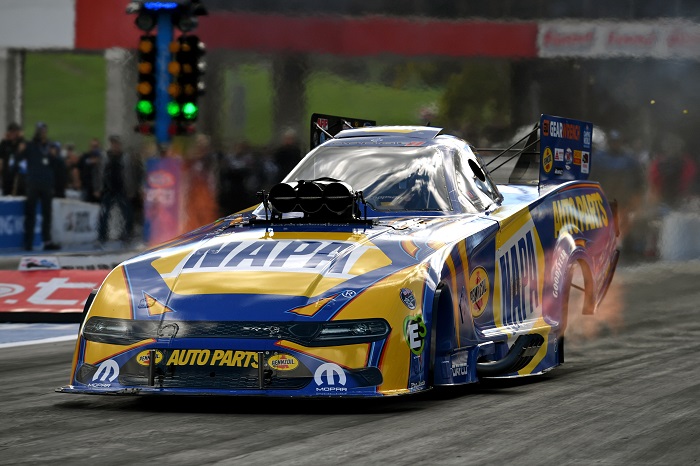 Due to the short field, DeJoria had a bye run in the second round, giving her a free trip to the semifinals. On the other hand, Ron Capps and Cruz Pedregon went head-to-head, with Capp taking the win in his NAPA Dodge Charger. Meanwhile, JR Todd beat John Force and Robert Hight beat Bob Tasca III, setting up a Toyota-Chevy and Toyota-Dodge battle in the semis.

Capps had a strong starting line advantage in his Dodge Charger funny car (.050 to .072), but JR Todd powered past in his Camry on the big end, winning with a 3.921 to Capps’ 3.972. On the other side of the bracket, Hight beat DeJoria on the tree, but the Toyota drove around the Camaro to get the win – setting up an unusual Toyota-Toyota final round.

Due to Hagan losing in the first round and Capps making it into the semis, Ron Capps was able to move ahead of his teammate to grab the top spot in the championship race by a single point. Thanks to his second place finish, JR Todd moved into the third spot, 83 points back, while Cruz Pedregon is now tied for fourth with John Force, 101 points behind the leader. Capps and Hagan are still in command, but it is crucial for them both to make late-round runs in the last two events of 2021 if they want to bring DSR another funny car title.

The next event is the Dodge//SRT NHRA Nationals Presented by Pennzoil at the Strip at Las Vegas Motor Speedway on October 29-31.