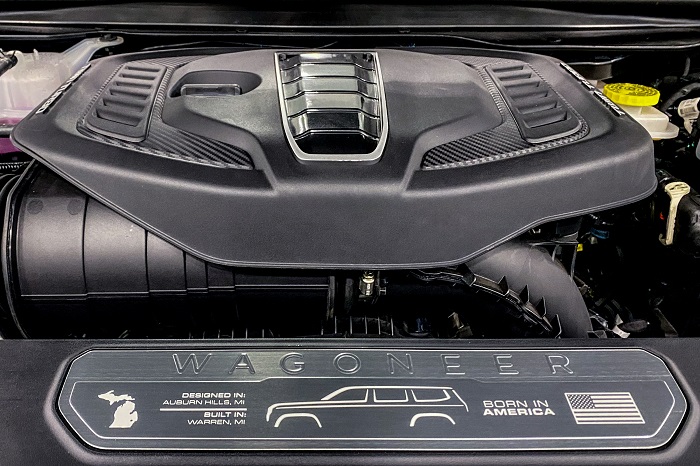 The battery-electric Wagoneer S might be coming, but the Wagoneer and Grand Wagoneer are already on sale. They started out with 5.7 and 6.4 Hemi engines, but these have largely been replaced already by two varieties of the “Hurricane” twin-turbo straight six. The standard output variety produces more power and torque than the 5.7 Hemi V8, using the same midgrade fuel; the high output version outpowers the 6.4 Hemi V8, using the same premium fuel.

Here is what it looks like in table form:

The Hurricane turbo-six provides an extra 1 mpg in the city cycle—which might not seem like much, but one mile per gallon is hard to get in such a heavy vehicle, especially while adding power. It’s a roughly 6% gain in economy, based on the rounded numbers we see here. The Hurricane also provides an extra 2 mpg on the highway, except in the big-and-heavy Grand Wagoneer L.

Wagoneer owners aren’t exactly going to be slipping gas station attendants a twenty and filling their tank, especially given the engines’ need for midgrade and premium fuel, but over the course of a year the savings should add up quickly.

Really not impressed by your mileage numbers,it’s not better than either Hemi’s 1 mpg better?? You are kidding right???
I will keep my Hemi’s .

Paul, I had a similar reaction. In my Challenger R/T with the cylinder deactivation I get pretty good mileage (22 mpg mixed driving) and gobs of power. I love my Hemi, that in my configuration, gives me the best of both worlds in a proven reliable package. No way I’d switch.

Wrong. It’s more power and more mpg, from an engine that is naturally balanced. The only thing you’re missing is the sound of the Hemi. Do I think they are both great engines? Yes. Do I think they should coexist? Yes. I honestly believe they should build a next generation Charger/Challenger with a 2.0, 3.0 standard output, 6.4, and 6.2 supercharged. The high output 3.0 should be Jeep only. Jeep doesn’t need Hemis, but Dodge and Ram do. If Chrysler makes a next generation 300, they need Hemis.

Typo in the paragraph below the MPG chart. Should say Hurricane I6, not Hurricane V8.

so…..are these just truck engines now or what?

It’s definitely just rwd. Just for trucks is determined by the decision to actually make a next gen Charger/Challenger or not. We’ll have to wait and see as Stellantis is not telling us anything about whats beyond 2023 other than the electric crap so far. The 2.0 can and will EASILY replace the 3.2/3.6 engines for fwd. In the near future, everything fwd will be 2.0 or 2.0 hybrid.

Just as Jeep is doing with the Avenger in Europe, I hope the Wagoneer S, which I am lusting after, will be available as a hybrid and with a gas engine. I will be looking elsewhere if not.
From a business case, to optimize marketing appeal, a hybrid is fundamentally sound and required.

I just wanna know when then Gladiator is getting a powertrain update. Hopefully it will get the 2.0 with a manual transmission.