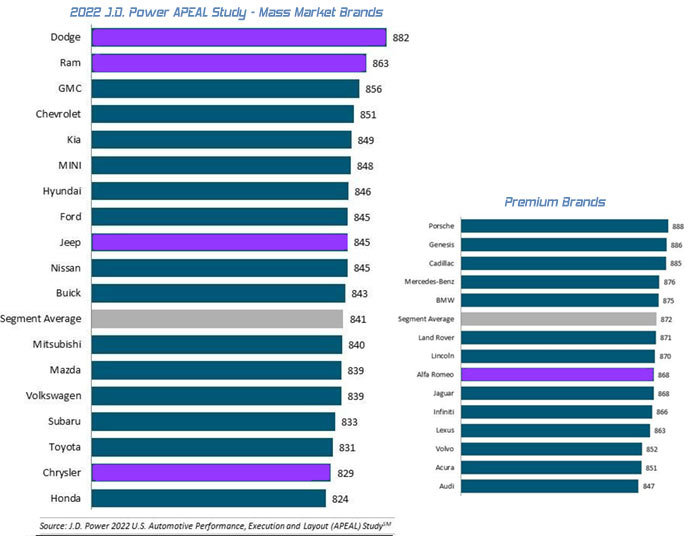 Dodge has again claimed the top mass-market-brand spot in the J.D. Power APEAL study, which considers “performance, execution, and layout.” That makes Dodge the first domestic brand to get the #1 mass-market ranking for three years in a row.

Ram was #2 for the third consecutive year, and the Ram 1500 was judged the best large light-duty pickup.

In 2019, Ram placed first and Dodge was second, so the two brands have been at the top of the list for four consecutive years.

The 2022 survey showed a slight (and likely not significant) drop of one point in new vehicle satisfaction, the first drop since 2014. J.D. Power claimed that was due to gasoline prices for gasoline powered cars, and charge times and driving range for electrically powered cars.

Overall, Porsche took the top honors, followed by Genesis and Cadillac. These were the only three premium brands to edge out Dodge; there was only a 6-point difference, on a thousand-point scale, between Porsche and Dodge. It was a bigger drop to Ram (from 882 for Dodge to 863 for Ram), which would have placed near the bottom of the premium-brand chart—equal to Lexus, and above Volvo, Acura, and Audi.

The Chrysler brand was second to last overall, scoring 829—but this was still well above Honda at 824. Jeep was above average. Overall, American brands fared well in the mass-market list, with all GM brands and Ford above average. In the premium list, Cadillac was #3, above average, while Lincoln and Alfa Romeo were both below average, but above Jaguar, Infiniti, Lexus, Volvo, Acura, and Audi.

Looking at the top vehicles in each segment was less enjoyable for Mopar fans. Most of the segments had no Stellantis vehicles at all—small car, compact car, compact premium car, compact sporty car, midsized car, large premium car, and premium sporty car. The only car category that they could have won was Upper Midsize Premium, with the Alfa Romeo Giulia, which was not listed; only the Genesis G80 showed up under “top three models per segment.”

Under SUV segments, Stellantis had more chances but did not do as well as expected. In ten segments, Jeeps placed first in two (large and premium SUV, with Wagoneer and Grand Wagoneer) and third in another (upper midsize SUV, Grand Cherokee). Chrysler did not make the top thee minivans list, headed by the Kia Carnival; in the three pickup categories, Ram 1500 was top in Large Light and Ram 2500/3500 was top in Large Heavy Duty Pickup.

3 thoughts on “Mopars have most APEAL, JD Power says”