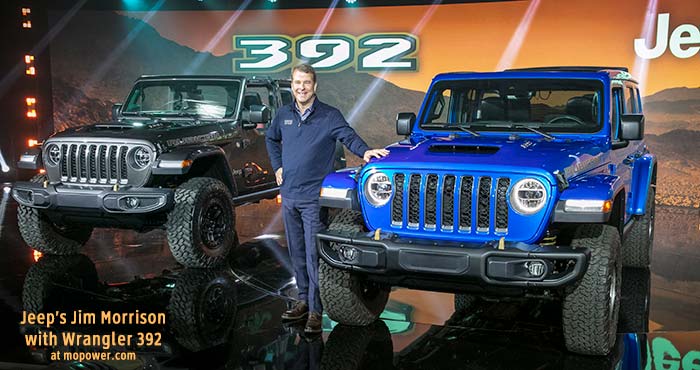 Tom (“TCMC”) at the JL Wrangler Forums posted that he now had a VIN and price next to his early order for a 392 Wrangler; it showed $77,055 for a four-door (Unlimited) Sport trim JL with the big Hemi V8, dual tops, and tow package.

The big question is whether that is real; the package code is correct, but the Wrangler shows up as a Sport when the 392 is made for the Rubicon. That said, optioning out a normal Rubicon to match the purported 392, and adding in Mopar wheels and lift, brings the price to nearly the same point.

What’s more, it is not just a 392 Hemi inside a Wrangler; engineering includes upgraded frame rails, a factory lift, special suspension geometry and parts, 33-inch tires on 17-inch beadlock capable wheels, a dual-mode exhaust, functional hood scoop with three-level water-removal intake system, secondary air path in case the scoop is clogged, seat bolsters, and rear axle lock in 4 High. Adding up all the upgrades, a price of $77,000 would not be unreasonable; Jeepers may pay at least that much just for a donor car and engine swap. (What’s more, Patrick Rall at Allpar predicted a price in the $70,000s when the 392 was first released.)

There’s also little incentive for Jeep to discount it too much; there is likely to be more demand than vehicles, and in any case, it doesn’t really push FCA towards meeting its average fuel economy numbers.