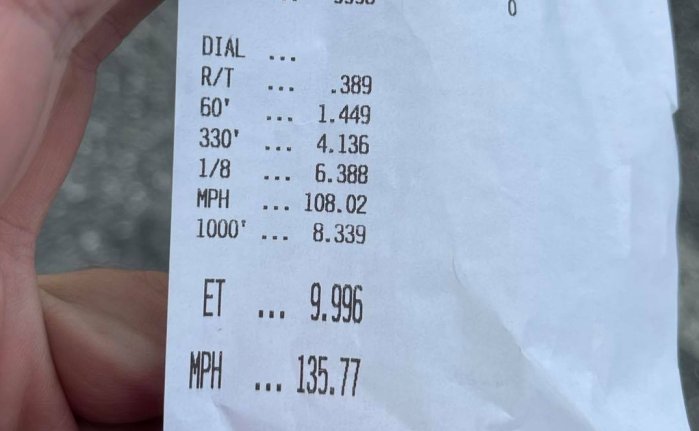 Late Thursday, Scott Boegler drove the Dodge Durango SRT Hellcat owned by Tina Boggess and built by American Muscle Performance into the 9-second range, making that the first factory-supercharged SUV to crack the 9-second barrier. After Boegler ran in the low-10s earlier this month, this Durango was the favorite to be the first in the 9s, but on Thursday afternoon at Palm Beach International Raceway made it official – making back-to-back 9-second runs in the Florida heat.

When Boegler first ran these numbers, my power and internet were out due to storms that pounded Michigan so today, we bring you a look at the first Dodge Durango SRT Hellcat to run a 9-second quarter mile.

In case you missed our first piece about this Dodge Durango Hellcat built by American Muscle Performance in Pompano Beach, Florida, here is a quick rundown.

When the supercharged SUV was running 10.0s, it was equipped with a ported blower snout, a 2.65 upper pulley, a 10% lower pulley, a 108-millimeter throttle body, a JLT cold air intake, FIC 1200 fuel injectors, a JMS boost-a-pump and an off-road mid-pipe setup. The engine is tuned by Brent Hughes of DTP Performance to make peak power on VP Fuels X98 ethanol. 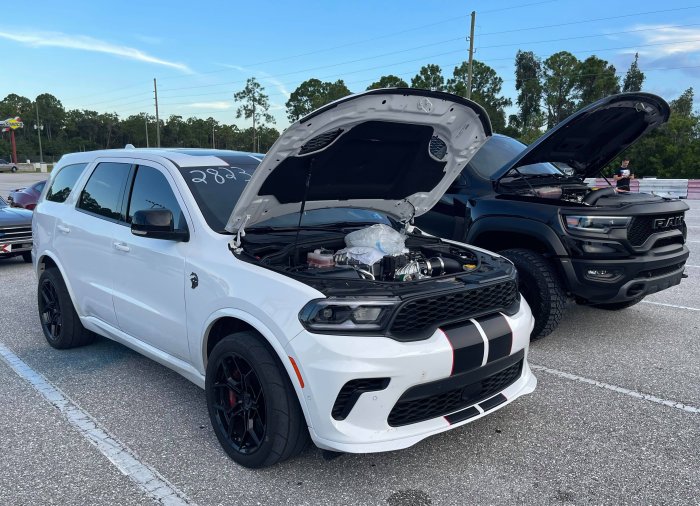 Since then, American Muscle Performance added a Cordes ice tank to help reduce engine air intake temperatures along with making some tweaks to the tune. However, these runs were made on a hot night with a density altitude of over 2,800 feet, so conditions were far from ideal, but that didn’t stop Boegler from making history by being the first to put a Durango Hellcat into the 9s.

First Durango to the 9s

On Boegler’s first run of the night, he reached the key milestone, becoming the first person to pilot a Dodge Durango SRT Hellcat into the 9-second quarter mile range. The four-wheel-drive SUV pulled 1.449 60-foot time, getting to the 8th mile line in just 6.388 seconds at a speed of 108.02 miles per hour. On the big end, Boegler stopped the timer with a 9.996 at 135.77 miles per hour. 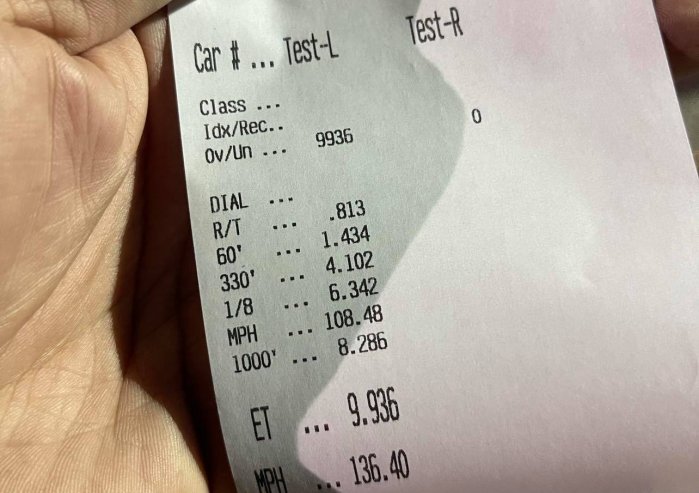 The next morning, owner Tina Boggess drove this Durango more than a thousand miles home, so not only is it the first 9-second Hellcat SUV, but it does so without compromising daily driving abilities. The only difference was that the long drive was made on 93-octane pump gas, with a unique engine tune and a slightly larger upper pulley.