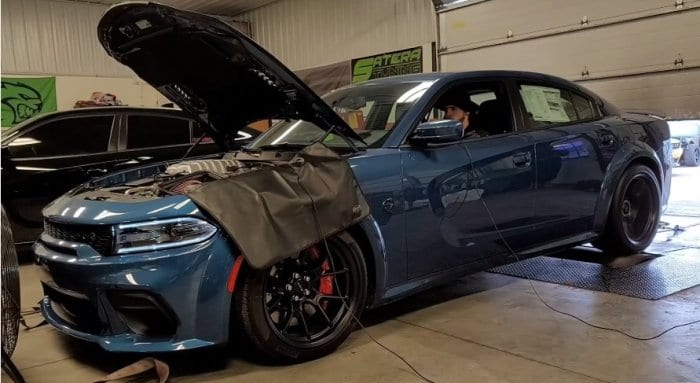 The 2021 Dodge Charger SRT Hellcat Redeye has just started showing up in dealerships around the country. According to the details accompanying this video from Satera Tuning, this is one of just nine that have been delivered, with shop owner and new Redeye owner Jeremy Satera picking the car up earlier this week.

For most people, the first few miles with a supercharged super-sedan would be spent cruising and enjoying all of that power, but the life of this Dodge Charger will always be a bit different. Satera is one of the top names in the modern Mopar tuning world, so he will use his new Hellcat for research and development of new, high performance tuning products. However, the first step to any build is a baseline dyno run and that is the focus of the discussion today.

Charger Redeye on the Dyno

In the video below, we watch as one of the first Dodge Charger SRT Hellcat Redeyes in the world to be delivered to an owner becomes the first in the world to stretch its legs on the dyno. The car is 100% stock and it is barely broken in, rolling over the 15-mile mark during the second of two dyno pulls. In other words, it is barely broken in, but it still lays down some impressive numbers.

As a reminder, the 2021 Dodge Charger SRT Hellcat Redeye is rated at 797 horsepower and 707 lb-ft of torque at the engine. For those unsure, the goal with these baseline pulls is to check the stock output at the wheels, so after upgrades have been added, more dyno pulls will show real world gains at the wheels. Satera makes two hard dyno pulls with the Charger Redeye, laying down 705 horsepower and 680 lb-ft of torque on the first and 717 horsepower with 679 lb-ft of torque on the second run. As the video information explains, these numbers are right in line with a Challenger Redeye, which has the same supercharged Hemi. 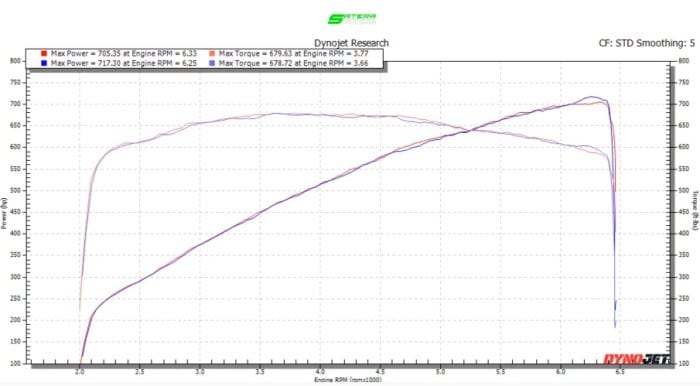 In addition to making big peak power, the Dodge Charger Hellcat Redeye sports an impressive torque curve that is really more of a flat line once the boost kicks in. As you can see in the dyno graph shared here, the supercharged sedan hit 600 lb-ft of torque around 2,300rpm and it stayed over 600 lb-ft until right around the 6,000rpm mark. That torque curve is one of the key reasons why both Hellcat cars are so impressive, as they make monster torque throughout the majority of the engine range on a hard pull.

The issue (for many vehicles on the dyno – not just the 2021 Dodge Charger SRT Hellcat Redeye) is that engines are tested very different by the automaker compared to a performance shop like the one shown in the video here. When an automaker, Dodge in this case, tests an engine for official power numbers, the engine is run hard for upwards of 10 minutes before the final numbers are reached. The engine is run on the dyno at idle at first, with gradual increases in RPM at full operating temperature until the peak numbers are reached. As a result, the engine is completely heat-soaked, simulating the impact of real world driving. 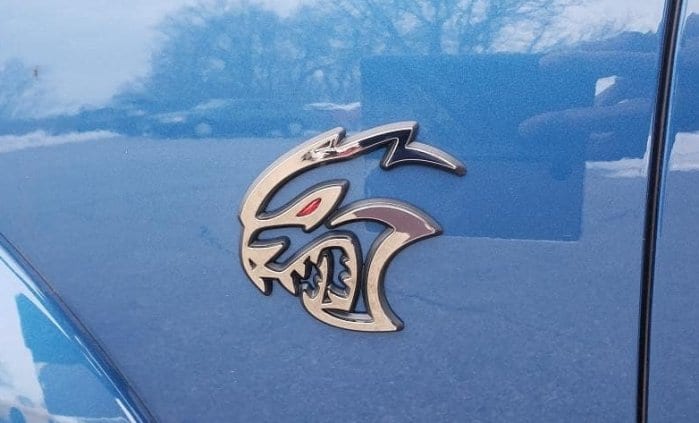 On the other hand, a dyno pull that you or I would run with our own vehicles is nothing like that. The engines are warmed up, but not to the point of being heat-soaked. There is plenty of fresh air pumped into the dyno area and in this case, that means that this Charger is sucking down ice cold winter air, which leads to stronger performance. Most importantly, dyno tests like this are done in a hurry rather than the slow, gradual increase of the OEM test. These differences in how the engine is tested leads to larger numbers, often leading many people to believe that modern vehicles are underrated, but in actuality, they are just tested differently.

I had a chance to speak with Jeremy Satera about his Redeye Charger and he provided a quick glimpse of what he has in store for his new four door beast.

The first round of modifications will include simple bolt-ons and tuning, with the goal of seeing how close he can get to 850 wheel horsepower with the Satera True Flex Fuel system. Satera is a leader in Hellcat flex fuel tuning and this car will be used to showcase those capabilities. 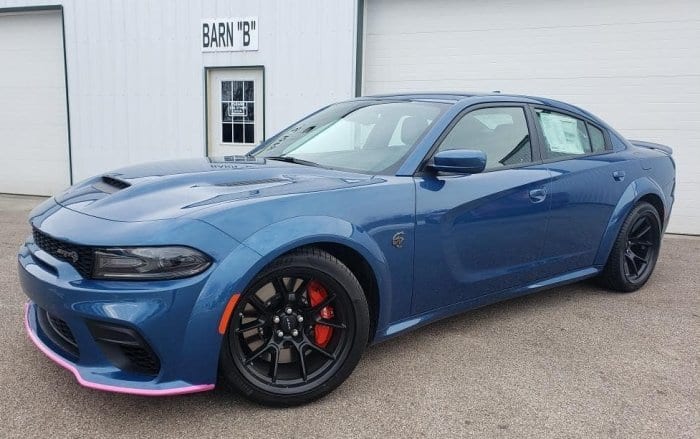 Next, Satera is currently developing a clutched pulley design and this car will be the “guinea pig”, which will in turn lead to higher boost levels and more power.

The final, and most exciting step, comes in the form of a Single Turbo Compound boost system, which uses both a turbocharger and the factory supercharger. That setup could yield numbers north of 1,100 wheel horsepower and Jeremy Satera hopes to get into the high-8-second range while still being completely street friendly.

For now, this Dodge Charger SRT Hellcat Redeye is his daily driver, except on snow days.