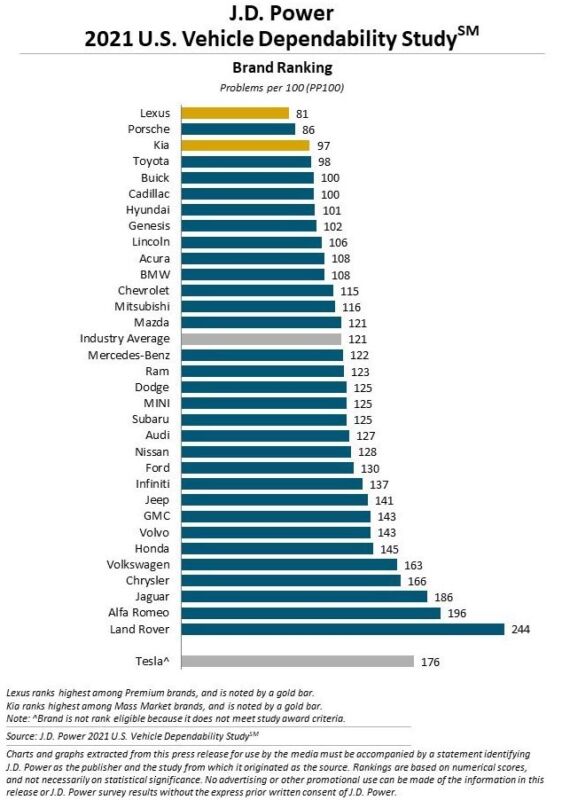 Ram and Dodge topped Stellantis’ brands in three-year dependability, according to J.D. Power, but neither managed to hit the industry average. Alfa Romeo, in contrast, was the second-worst brand sold in the United States. The news was not good for Stellantis.

Ram and Dodge were almost certainly not significantly lower than average, when variability is taken into account, and they were almost identical to Mercedes; the luxury car maker has 1.22 problems per car, on average, while Ram has 1.23 and Dodge had 1.25. They beat Mini, Subaru, Audi, Nissan, Ford, and Infiniti, among others.

Jeep was around ¾ of the way down the chart, with 1.41 problems per car, enough to beat GMC, Volvo, Honda, and Volkswagen. Chrysler came in next, with 1.66 problems per car, beating the usual suspects — Jaguar, Alfa Romeo, and Land Rover.

There were not enough Teslas to be included in the chart, but the ones that did show up had 1.76 problems per car—worse than any Stellantis brand.

The winners were really Toyota (whose Lexus brand was #1, and whose eponymous brand was #4); Porsche (#2); Kia, the low-buck brand (#3); and, mainly, General Motors. GM’s Buick and Cadillac came in #5 and #6, just below Toyota, and above Hyundai and Genesis. Chevrolet was also above average, with 1.15 problems per car, about the same as BMW and Mazda, and better than Mercedes. Only GMC, among the General Motors brands, was problematic, and that matched Volvo exactly at 1.43.

The dependability study is far more important than the initial quality study, because it looks at problems that are more likely due to engineering, materials, and construction than dealer inspection.