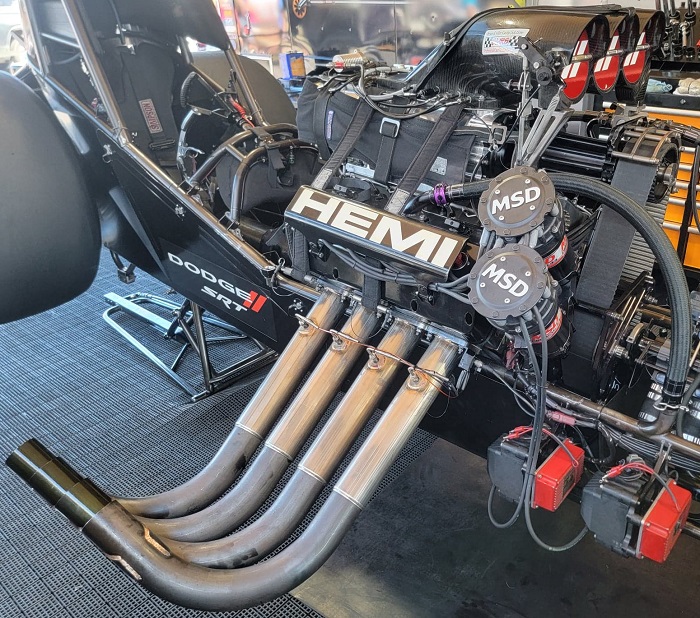 A few months back, I attended the Summit Racing Equipment Nationals at Summit Motorsports Park in Ohio, where I got to spend the day in the Tony Stewart Racing garage area. While there, I got to watch the teams of Matt Hagan and Leah Pruett as they prepared for their first track action of the event, alongside a handful of of media members. Some of these media folks were new to the world of drag racing and one of them pointed out the fact that the engines in the Ford, Chevrolet and Toyota Top Fuel Funny Car teams around Hagan’s garage stall looked very similar to the supercharged Hemi used in the Mopar-sponsored TSR cars – noting that they didn’t look like big block Ford and Chevy engines.

They were unaware that all of the Ford Mustang, Chevrolet Camaro and Toyota Supra funny cars are all powered by a 500-cubic inch Chrysler Hemi. Of course, those non-Mopar don’t have Hemi or Mopar branding on their engines, with some of them using shields over the central portion of the valve covers that protect the plug wires and conceal the center-plug design, but when the engines in the top Ford, Chevy and Toyota drag cars are broken down, there is no question that they are using a Chrysler Hemi engine design. In speaking with some fans at the track, we found that many people – even those who took a day off of work and paid to watch racing – did not know that all of these teams are using Hemi engines. 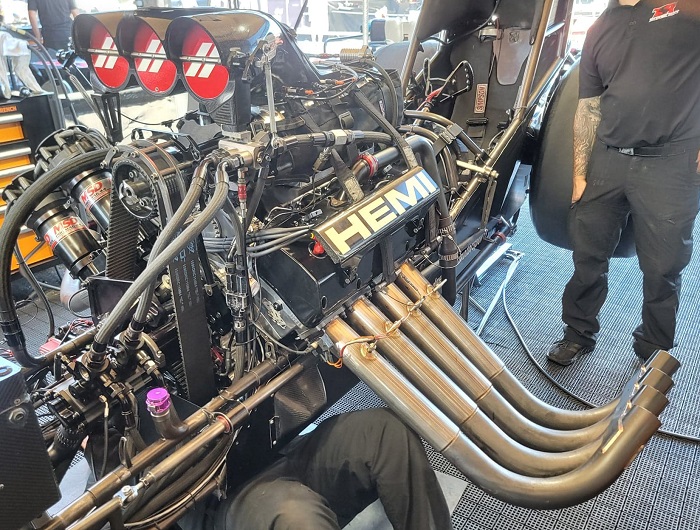 The Ford, Chevy and Toyota media websites do not offer any close-up images of the NHRA Top Fuel cars that they support – for pretty obvious reasons – but in looking through the Facebook pages of several top teams, we found great examples of the engines from the other brands. Since we don’t have permission to use the images, we have included links to each for your viewing pleasure. 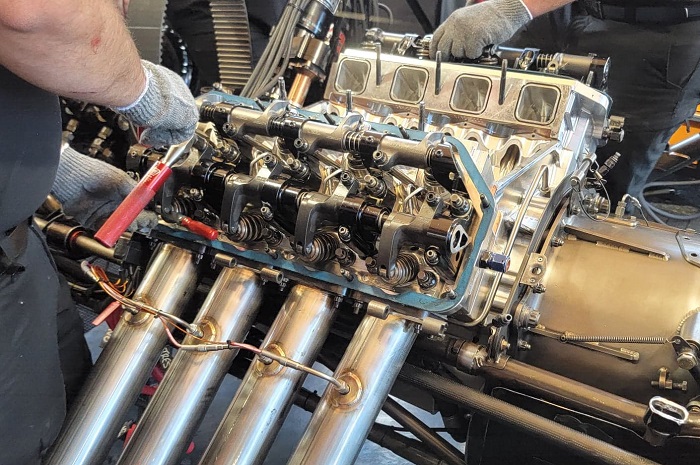 For comparison, all of the images on this page show the engines from Matt Hagan’s Dodge Charger funny car. 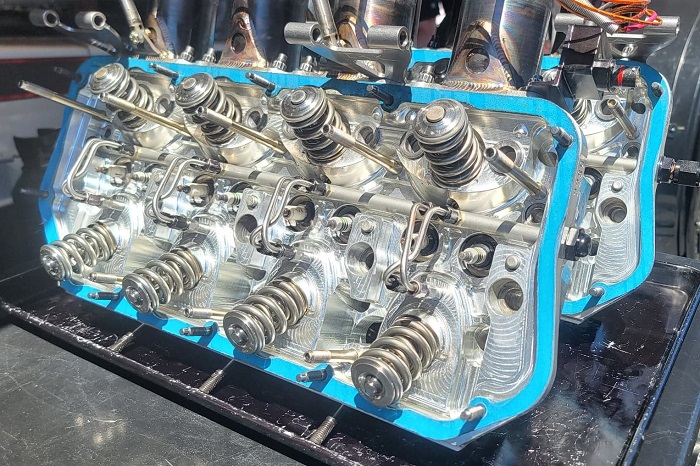 JR Todd has been racing with Toyota for years, winning the NHRA Funny Car Championship in 2018. His team members work on his car in hats that read “Toyota Racing Development”, but Chrysler did all of the development for their engines a few decades back. In his gallery of images on Facebook, Todd has three pictures that clearly show the engine in his car, showing the unmistakable Hemi cylinder head design.

Next up, we have the Chevrolet Camaro funny cars from John Force Racing, piloted by Force himself and teammate, Robert Hight. Both Hight and Force have won a handful of championships in Ford Mustang and Chevrolet Camaro funny cars – all of which were using a Chrysler Hemi engine. Force and Hight current run Camaro funny cars and Hight is the current leader in the championship chase. The images below from the JFR Facebook page show the engines with a “Chevrolet” logo covering the area where the spark plugs enter the cylinder head in familiar Hemi fashion.

Finally, we come to the Ford Mustang of Tim Wilkerson. Wilkerson has been racing a Ford body for ages, but they all packed Hemi power. His Facebook gallery has some of the best pictures of a “non-Mopar” Top Fuel engine being worked on, showing the internal workings of the Hemi cylinder head design, while the assembled images have a plate that covers the plug entry to the heads.

So, the next time a friend with a Mustang, Camaro or Camry gets to bragging about NHRA drag racing success, remind them that all of the top teams from Ford, Chevrolet and Toyota all run Chrysler Hemi engines. While none of these funny cars resemble the production road car, at least the Dodge teams are using Dodge engines – the others are just logos on Dodge-powered race cars.