Stellantis reported retail sales similar to 2020, and total sales around 2% below 2020.

Two major pieces of news for an odd year of shortages and COVID were GM slipping from #1 in US sales, for the first time in 90 years, and Hyundai beating Honda.

There was good news in FCA’s numbers, including sales of 7,892 Wagoneers and Grand Wagoneers during their first full quarter; and record fourth-quarter sales for the Pacifica and Pacifica Hybrid.

It is hard to draw any conclusions from what sold well and what did not, since many sales in this year were due to availability rather than desirability. That said, within Jeep, the Cherokee, Renegade, and Compass were all down; 16 Patriots surfaced and were sold; and the Wagoneer saw 5,349 sales while the 392-powered Grand Wagoneer saw 2,675 sales.

As for the rest of Dodge, the Journey and Caravan were both dropped, so selling 14,035 Journeys and 3,037 Caravans probably cleared the lots permanently. There were 35,000 fewer Caravan sales in 2021 than 2020, but only 4,500 more Pacifica sales; but the Pacifica was definitely supply-constrained. Durango saw a 14% gain, though, despite a 26% gain in Grand Cherokees.

Grand Cherokee L was not split out; nor was Voyager. 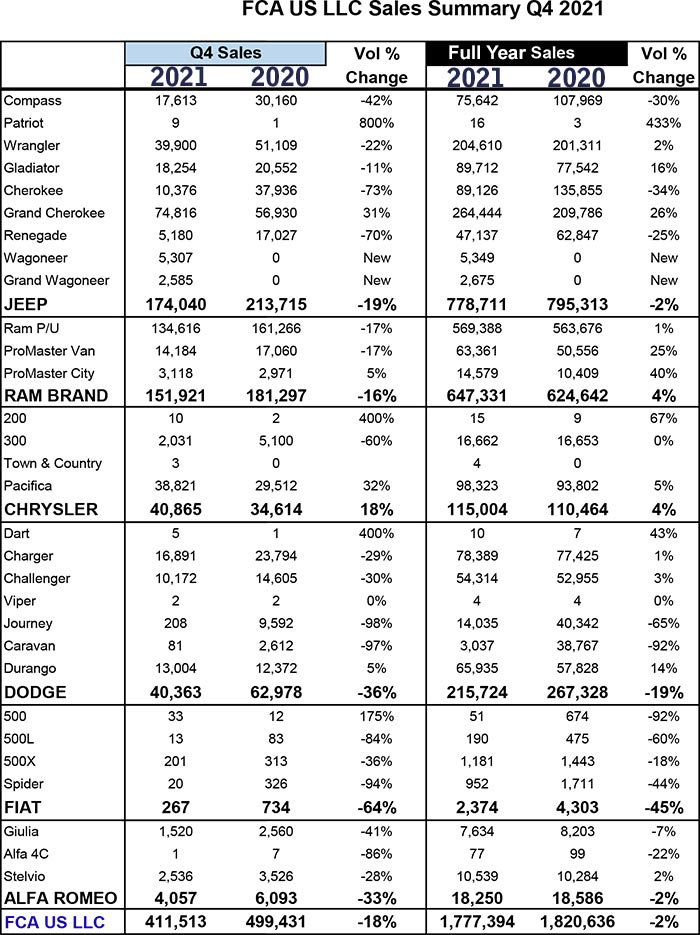