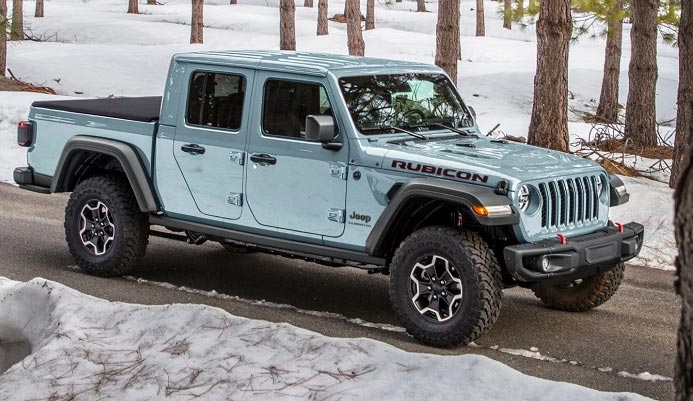 The Jeep Gladiator has an array of uniquely named colors and this week, the Trail Rated brand introduced the newest color for the 2023 model year. The color is named Earl and the company is calling it a “bold shade of gray with hints of aquamarine”. To me, it looks like a very light blue while others see it as more of a blue-tinted gray, but in either case, it is another unique color for the toughest, most enthusiast-driven truck in the midsized segment.

“The Jeep community voiced a ton of positive feedback for Earl when it debuted on the Gladiator Farout concept,” said Jim Morrison, senior vice president and head of Jeep brand North America. “We work to deliver what our customers tell us they want, and Earl is the latest example of another standout shade that speaks to our loyal and avid Jeep community.”

While this new exterior color option for the 2023 Jeep Gladiator is bound to create some discussion as to whether it is blue-tinted-gray or light blue, its name is likely to create a different discussion – while possibly putting the first discussion to rest. This color is simply called “Earl” – not Earl Gray or Blue Earl – just Earl. Jeep likes to come up with unusual names for the exterior colors of the Gladiator (and the Wrangler), but Earl is a particularly unusual choice, so we reached out to the Jeep brand to see if there was a greater meaning behind the word.

“With Punk’n, Reign, Snazzberry, Firecracker, and Tuscadero, the names in the Jeep Wrangler and Gladiator exterior color palette are as fun as they are memorable and descriptive,” said a representative from the Jeep brand. “Earl continues the tradition. Of all various shades of gray, the name Earl is a fun nod to the tea and another topic of conversation for our Jeep enthusiasts.”

So according to that statement, not only is Earl gray, not blue, but it was named Earl because it is another shade of gray and Earl Gray is a popular tea choice, so the brand chose Earl as the name of this new gray. It still looks more like light metallic blue in the sole picture from the brand and in asking a bunch of automotive enthusiasts on Facebook, I am not the only one who sees this color is a shade of blue rather than a shade of gray. Someone even pointed out that Earl is similar to the color of the Silver Surfer in comic books.

Semantics aside, the 2023 Jeep Gladiator looks sharp in Earl and it is currently available for ordering on every trim level of the most rugged midsized truck on the market. This new color has an MSRP of $695, so it costs more than the other exterior colors, most of which are $395, with the exception of Bright White, which comes with no upcharge.

Will Jeep finally give the Wrangler/Gladiator a refresh in 2024? The Frontier and Colorado/Canyon twins have already had updates, and the Ranger and Tacoma are getting one for 2024. I have a Gladiator with a 6 speed and 3.73 gears and I can tell you it’s definitely slow with no low end torque. I would like to see the 2.0 with 6 speed manual or 8 speed automatic and have the 3.0 with the 8 speed automatic optional. I know as 6 speed manual 3.0 is definitely out of question.

Not a chance. Carlos won’t spend the $$.

Comment was partially N.Y. Sarcasm. My actual point was I never paid a nickel up charge for ANY paint color on my fifteen Scat Packs and SRT’s from ‘19-‘21. So Carlos raises the M.S.R.P.’s $7-10K the destination fee’s and still has to screw ( Sorry, I meant squeeze) customers out of another few hundred bucks. Same comment for Mr. Rall, also.

For what it is worth, the FCA brands had the same upcharges for most paint colors. Check out the Challenger color lineup – most of them are $395 extra. I dont love the practice, but at this point, it is pretty much industry-wide. Some brands (BMW) only offer black and white at the base price and everything else costs more. Back in the day, only the premium metallic colors cost extra on Dodge products, but at this point, just about every color is metallic paint, so they all cost more.

That is a pretty standard number for a new paint color that will likely be sold in limited numbers. For example, the premium metallic paint options for the Mustang are $695.

It ALL comes out of the same can.