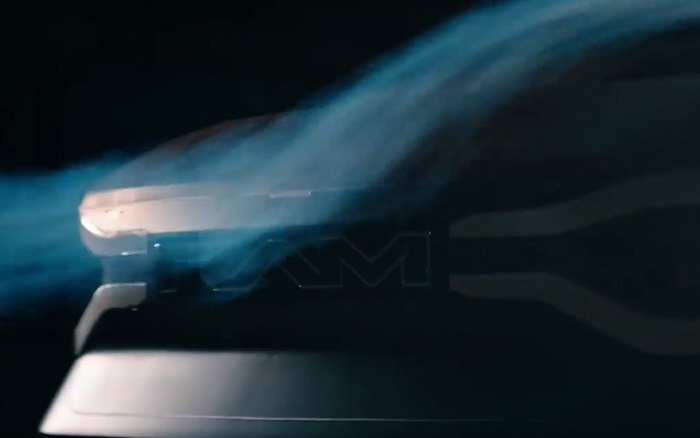 Stellantis has announced that CEO Carlos Tavares will be giving the keynote speech at the Consumer Electronics Show in January and during the course of that appearance, he will introduce a pair of battery electric vehicle concepts – one of which will be the Ram Revolution. The Ram 1500 Revolution will be the company’s first all-electric concept, but we expect that many aspects of that concept will be production-friendly. In other words, the concept should have many similarities to Ram’s first production EV pickup.

So far, the Ram brand has issued a couple shadowy teaser images including the one above, but in a video posted by the brand’s official Facebook page this morning, we get a look at the front end of the Revolution – kind of. It is actually said to be a small scale model being used for wind tunnel testing, but what we see in the video below could provide us with our first look at the face of the Ram EV.

In addition to the wind tunnel shot of the scaled-down front end, the video below shows clay models of the Ram Revolution being created ahead of the tunnel testing. While these clay forms are smaller than the actual truck, the footage of the clay models give us an idea of what to expect in terms of styling and proportions. Also, while we watch the clay forms of the Ram Revolution come together, we hear from some of the top design people from Stellantis, including Head of Design Ralph Gilles, VP of Ram and Mopar Design Mark Trostle, Chief Interior Designer Ryan Nagode and Lou Gasevski, the Lead Designer for the Ram brand.

i am impressed , just map out your receptacles and do not plan a long trip, my town has one charging station and thats for our doctors at the hospital , non public. i am excited! “LOL”