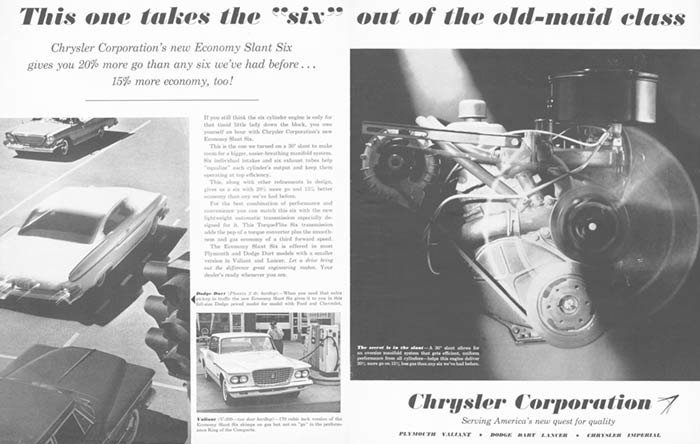 In the early 1920s, Dodge was a four-cylinder car despite its premium market position; Chrysler was launched with a single straight-six; and Maxwell, like its replacement (Plymouth), was also four-cylinder only.

Times changed and all three brands featured a range of straight-six engines and V8s, with four-cylinders and straight-eights forgotten and V6 engines ignored. The straight six, the base engine for Plymouths and some Dodges, was neglected for many years—until a brand new engine, really created for the Valiant but also sold in a bigger size for larger cars, burst onto the scene in the 1960 models.

The Hurricane Six, Mopar’s first brand new straight six since 1960, isn’t replacing a straight six; it’s replacing V8 engines. Still, the original slant six was a potent engine for its day and class, despite its single-barrel carburetor and tame tuning; and in race form, with better carburetion, slant six Valiants devastated GM and Ford’s entries in NASCAR’s first-and-only compact car races. Like the Hurricane, it also cut fuel use (by 15%).

Courtesy of motales.com, here are some ways Chrysler showed off the new slant six. How will Jeep, Dodge, and Ram show off the new Hurricane—if they advertise it at all?

If you still think the six cylinder engine is only for that timid little lady down the block, you owe yourself an hour with Chrysler Corporation’s new Economy Slant Six. This is the one we turned on a 30° slant to make room for a bigger, easier-breathing manifold system. Six individual intakes and six exhaust tubes help”equalize” each cylinder’s output and keep them operating at top efficiency.

This, along with other refinements in design, gives us a six with 20% more go and 15% better economy than any we’ve had before. For the best combination of performance and convenience you can match this six with the new lightweight automatic transmission especially designed for it… Let a drive bring out the difference great engineering makes. 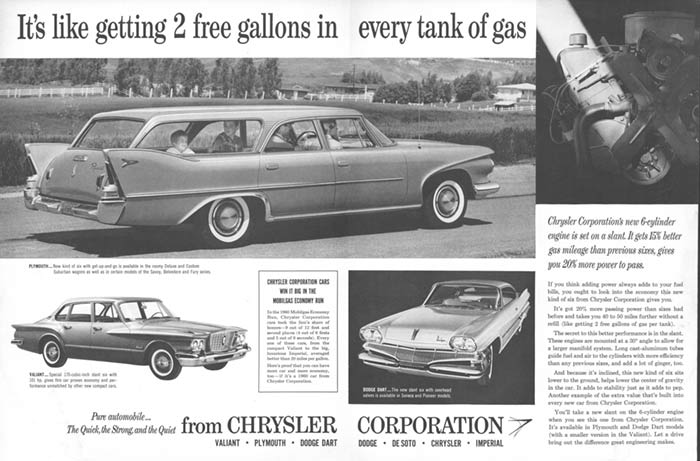 If you think adding power always adds to your fuel bills, you ought to look into the economy this new kind of six from Chrysler Corporation gives you. It’s got 20% more passing power than sixes had before and takes you 40 to 50 miles further without a refill (like getting 2 free gallons of gas per tank). The secret to this better performance is in the slant. … this new kind of six sits lower to the ground, helps lower the center of gravity in the car. It adds to stability just as it adds to pep… 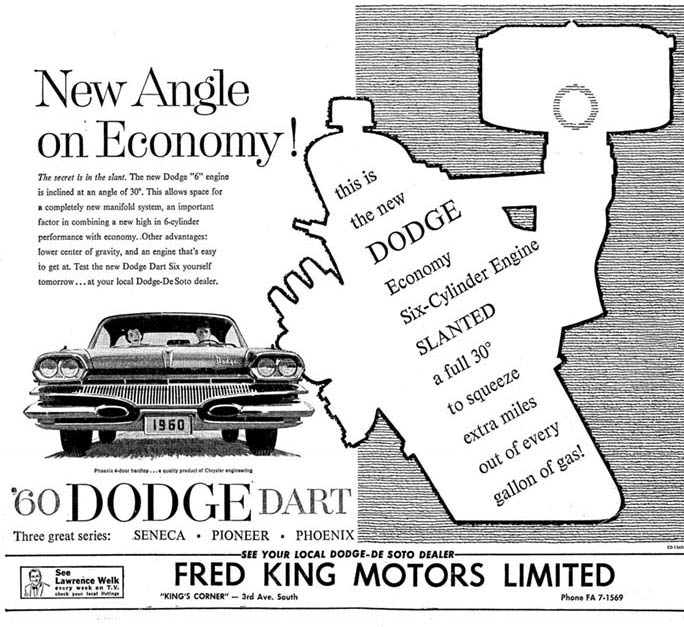 As a side note, the advertising copy is not necessarily accurate. The slant was to fit the engine into the Valiant; by leaning it over, they made it shorter and also made room for accessories to be on the side rather than on the ends. 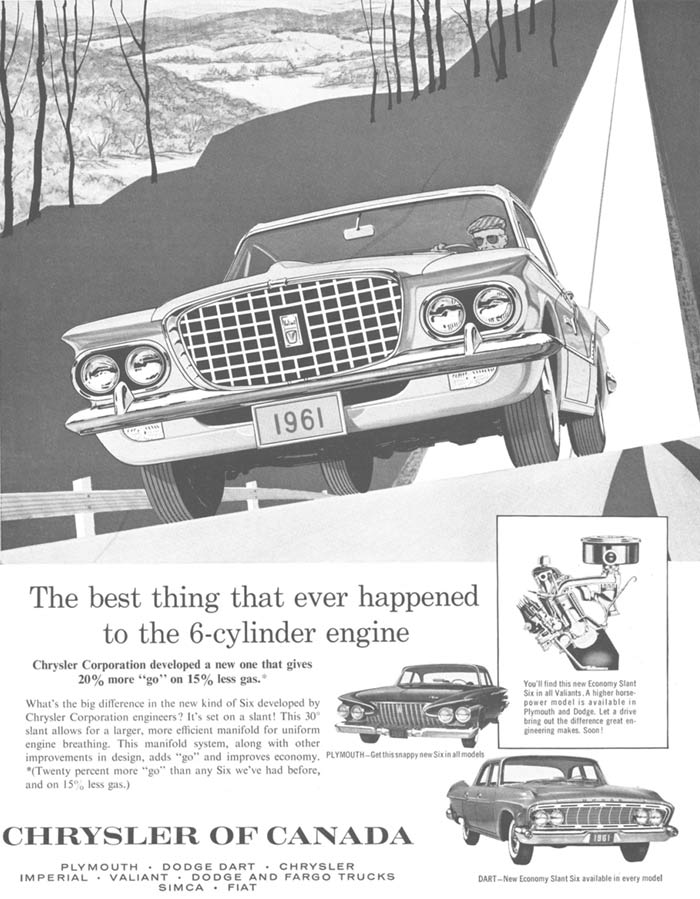 Chrysler Corporation developed a new one that gives 20% more “go” on 15% less gas.*

What’s the big difference in the new kind of Six developed by Chrysler Corporation engineers? It’s set on a slant! This 30° slant allows for a larger, more efficient manifold for uniform engine breathing. This manifold system, along with other improvements in design, adds “go” and improves economy.
*(Twenty percent more “go” than any Six we’ve had before, and on 15% less gas.)