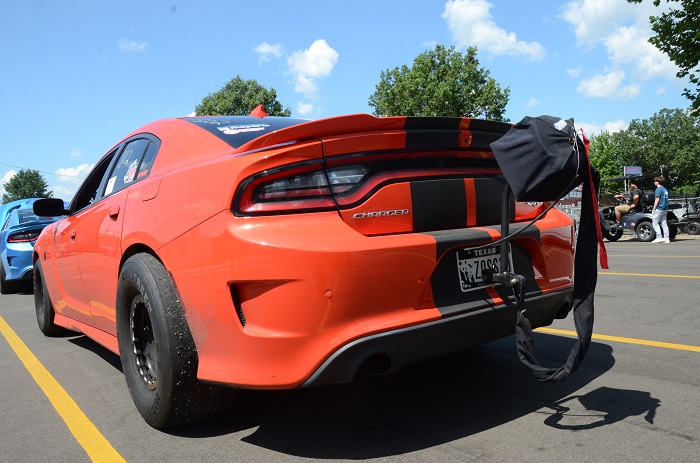 The Go Mango 2016 Dodge Charger SRT Hellcat which is owned, driven and tuned by Zdung Ho has long been the quickest and fastest Hellcat sedan in the quarter mile, but at the first Legion of Demons event of 2023, the man known throughout the community as “Z” continued improving on his personal best time – resetting the modern Dodge Charger quarter mile world record in the process. 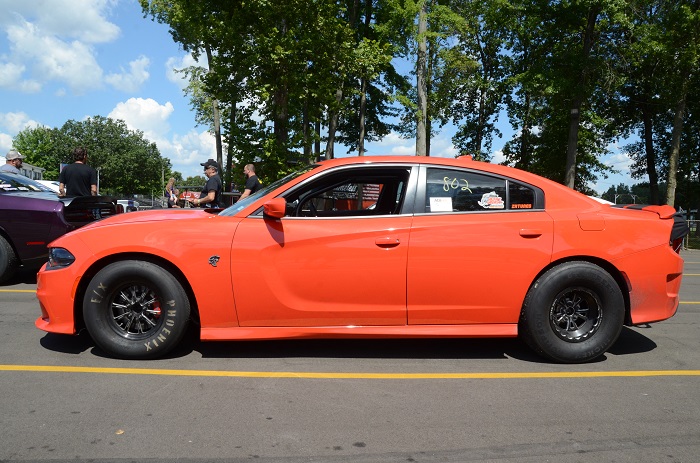 For those who aren’t familiar with Zdung Ho and his Dodge Charger SRT Hellcat, he was the first Hellcat Charger driver to run an 8-second quarter mile and the first to run a 7-second quarter mile. As a result, his Go Mango sedan has held the title of the world’s quickest Hellcat Charger for a long time, with his previous record run of 7.72 at 178.83. Since running that number, Z has made some key changes, so when he went to Houston for the first Legion of Demons event of 2023, he was looking to lay down some big numbers – and he did just that.

On his first pass of the weekend, Zdung Ho ran a 7.906 at 174.84 mph with what he called a conservative tune, running with a 150 dry shot of nitrous oxide and a 3.125-inch pulley on his new 3.8-liter Whipple supercharger. Due to some fuel issues, he dialed back to a 125 dry shot for the next two runs and ran another 7.90 followed by a 7.87. Again, those times were run on a conservative tune, a relatively small amount of nitrous oxide and a larger pulley, thus lower boost levels. 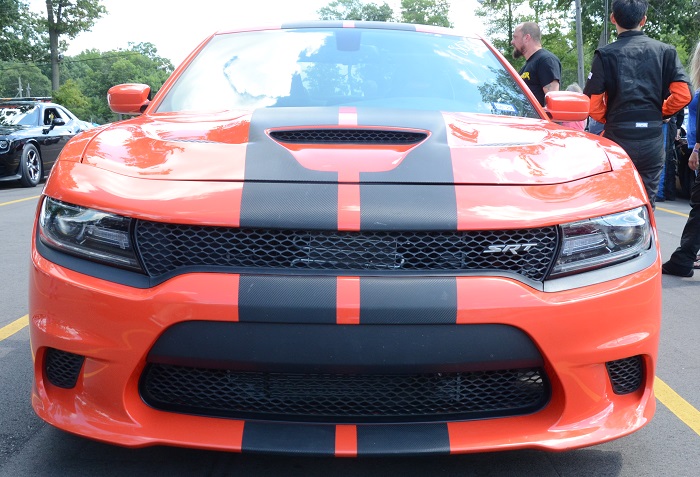 On the second day of racing with the Legion of Demons, Z got more aggressive, running just a 100 dry shot of nitrous, but adding a second stage through the Nitrous Outlet engine plates with a 300 shot. Still running the 3.125 pulley, this nitrous setup yielded a 7.701 at 182.01 miles per hour, which effectively reset the quarter mile time and speed record for Dodge Charger SRT Hellcat models. 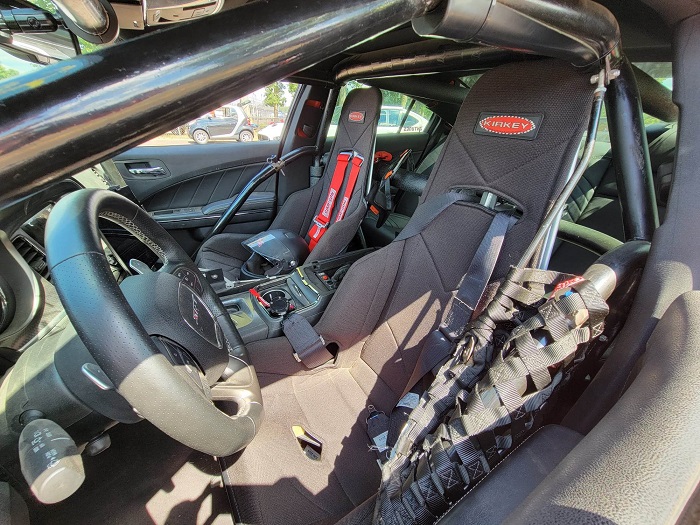 Next, he increased the first stage of nitrous to a 150 dry shot while the second stage was increased to a 450 shot. He also swapped to a 3-inch pulley, adding more boost to the equation as well. Thanks to the masterful track prep at the Legion of Demons event, Z was able to put all of that power to the ground, pulling a 1.165 60-foot time, running a 4.92 at 146.15 in the 8th mile and a 7.622 at 183.29 miles per hour in the quarter mile. That 7.622 allowed him to beat the previous modern Dodge Charger quarter mile record of 7.67, set by Hemi tuning legend AJ Berge with his Hellcat-powered 2006 Charger, making Zdung Ho’s Go Mango sedan the quickest modern Dodge Charger ever. 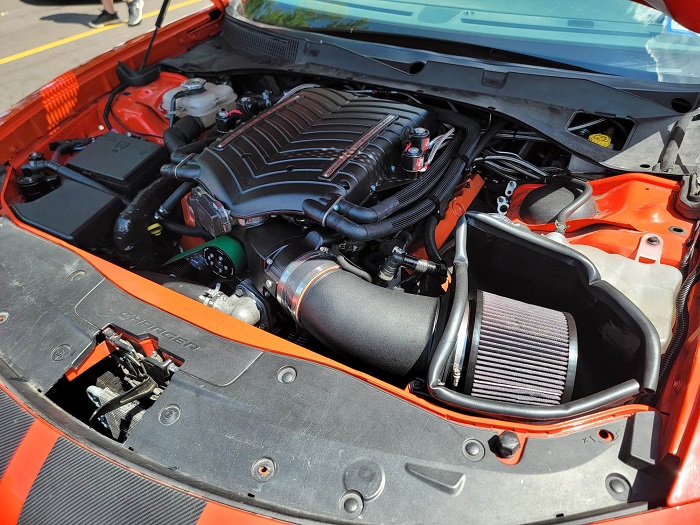 As you might imagine, getting a 4,400-pound Dodge Charger SRT Hellcat to run the quarter mile in the mid-7-second range takes a pretty substantial list of modifications, but this car is still running the factory-style ZF 8-speed automatic transmission and a factory-style independent rear suspension setup. The transmission and rear suspension feature aftermarket components, but Z has not swapped to something like a TH400 and a solid rear axle, yet he is still well into the 7-second range.

The engine has been enlarged to 441 cubic inches, built by Demon Performance and TKM. It features ThiTek cylinder heads, a Winberg billet crankshaft, Carrillo Pro-H connecting rods, a custom Demon Performance camshaft, a Manton Roller Rocker System, Stainless Works longtube headers, Nitrous Outlet intake spacer plates and a new 3.8-liter Whipple supercharger. When Z set his previous record, he was running a 3.0-liter Whipple supercharger (the image above shows the 3.0L supercharger), but from the 7.72 to the 7.62, the only changes are the blower, tuning adjustments and the nitrous system tweaks mentioned above.

Put That Boy In A Factory Stock Car For NHRA Competition

Sounds like the same empty threats i dealt with back when.
I had a target on my back for several yrs.yes quite the reputation my ol 68 roadrunner made for us.Fords were easy,no competition at all. I took a stock finely tuned 440 auto with 3.55 gears,L60 tires and showed everyone the tailights of that ol mopar
I was driving mopars when it wasnt cool,they were the poor mans car,now you cant buy one without breaking the bank,thanks to those drunk millionaires and their checkbook at the televised auctions.
Lost their ass buying those million dollar cars.Haha,good enough for em.

THOSE DODGE CHARGERS AND SLTS AND HELLCAT ESPECIALLY… THIS IS A WARNING ” THE NEW FORD SHELBY COBRA 🐍 IS COMING FOR YOU VERY SOON…SO PLEASE HAVE FUN HOLDING YOUR CROWN’S.. WELL BE TAKING THOSE SOON ENOUGH LOL..

You have been coming for us since the beginning of Ford Motor company and your still not there, So please stop selling you woof tickets !

Use the Disqus box to weigh in with your thoughts! (It may take a moment to appear)
wpDiscuz
6
0
Would love your thoughts, please comment.x
()
x
| Reply