This is part 2 of my review series of the 2021 Ram 1500 TRX. If you missed the first part, explaining why we are doing a review series and looking at the one downside to the TRX, click here. If you are familiar with the series, here is a look at the real world fuel economy. Since there aren’t many good pictures that go with the theme of fuel economy, we have just included some cool shots of my test truck. 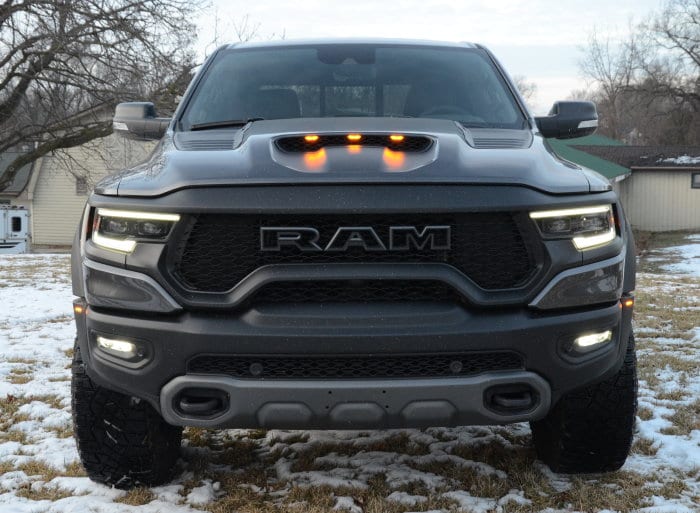 The vast majority of people who buy a 2021 Ram 1500 TRX won’t be too worried about fuel economy. After all, this is a 6,500-pound full-sized truck with a supercharged 702-horsepower Hemi. It is obviously not intended to get great fuel economy numbers, but when many people who buy a TRX plan to use it for a daily driver. Those folks certainly don’t expect 50mpg, but they are hoping for a relatively reasonable number when they are driving the truck to and from work each day.

The problem is that a few of the first outlets who got a Ram 1500 TRX for at-home testing (as opposed to an on-site event held by the brand) got absolutely terrible fuel economy. One outlet reported 7 miles per gallon and others were also in the single-digit range. That led some of the folks who ordered one with the intention of driving it every day to worry about the cost of feeding this beast. While driving the TRX for a week, I fielded many fuel economy questions from folks who had ordered a TRX, which is why I chose to talk about this odd metric so early in my review. For those who care about fuel economy of the TRX, they don’t have to wait and for those who don’t care about fuel economy, we get it out of the way early. 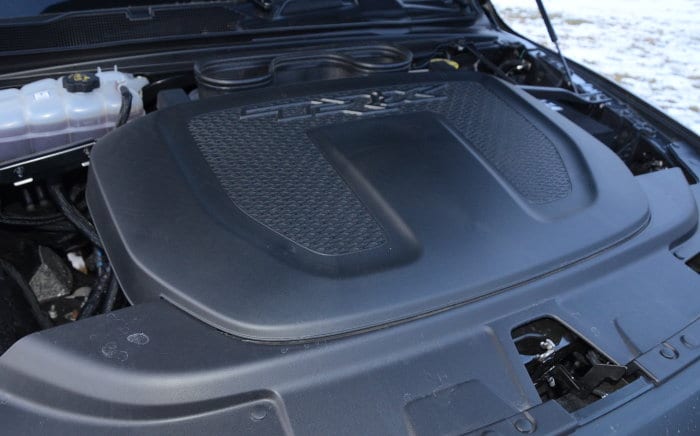 Fortunately, my fuel economy numbers were considerably better than other outlets.

I live in the Metro Detroit area and my standard “highway fuel economy test loop” that I typically use for more fuel-friendly test vehicles is a 60-mile drive on I-96 and I-696. Unfortunately, during my week with the TRX, we had some harsh winter weather that caused accidents that interfered with my highway fuel economy testing on several occasions. Because of that, I had to settle for a slightly shorter highway test loop that covered about 36 miles. 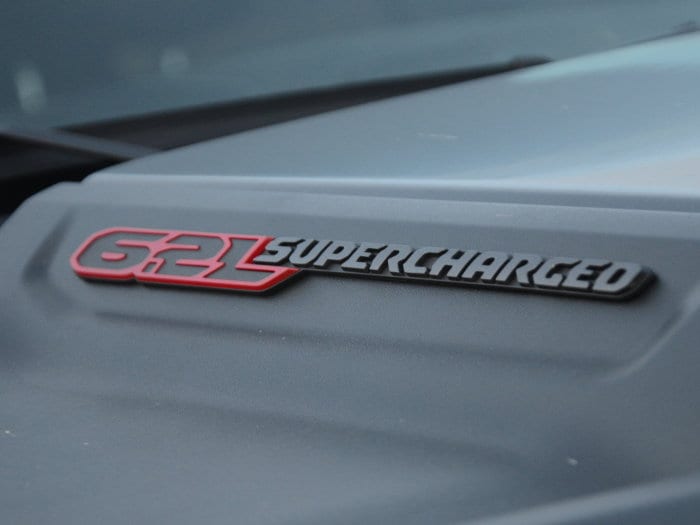 The highway is relatively flat with some small hills, but overall, the uphill and downhill portions are minor enough that they cancel each other out. What is lost going up a hill is gained on the other side and vise versa, but in relation to very mountainous areas, the local highways are basically flat. My drive route is about 18 miles to an area where many residents of my town drive to work every day, a short turnaround and 18 miles back to my house. I set the cruise at 74 and leave it there, except when exiting and entering the highway. 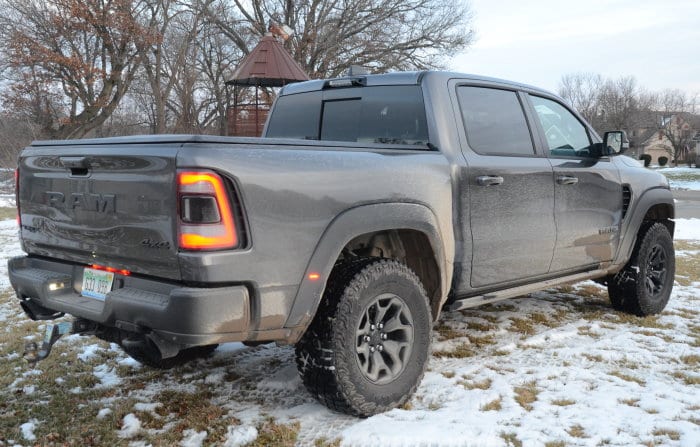 During this 36-mile drive with the cruise control set just below 75 miles per hour, I averaged 12.3 miles per gallon. For those wondering, when I attempted my normal, 60-mile test route, I was averaging 12.5mpg until I hit accident traffic that killed my numbers, so I would call mid-12s a very reasonable expectation when making an all-highway run at 75mph. I made another short-ish highway trip with the cruise set at 80mph and at that speed, my fuel economy numbers dropped down to 11mpg. Also, while I didn’t make any slower highway runs, I have seen real world reports from one owner who made a long highway drive with the cruise set at 55 miles per hour and he got 15 miles per gallon, so if you live in an area unlike Metro Detroit, where the speed limit is 55 rather than 70, you are all-but-certain to exceed my number of 12.3mpg. 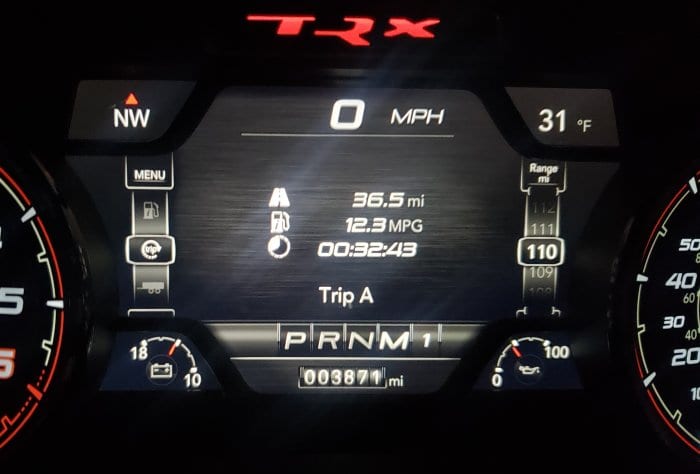 As for city fuel economy, those numbers are harder to test, as there are many variables. That being said, over the course of a week with many, many hard pulls and some time hooked to the horse trailer, I still averaged right around 10mpg.

Seeing as how I got 12.3 miles per gallon on the highway and my average number hovered around 10, I was really curious how some outlets got as low as 7 miles per gallon. I figured that, if nothing else, pulling a loaded horse trailer with the Ram 1500 TRX would yield those poor fuel economy numbers, so we loaded up two of our retired thoroughbred race horses-turned-show horses into my two-horse test trailer. This is the trailer that I use for all truck and SUV towing tests and, when loaded, it weighs about 5,500 pounds. This is well below the maximum towing capacity of the TRX, but this trailer and this weight load is very common for the average person who tows a small trailer. 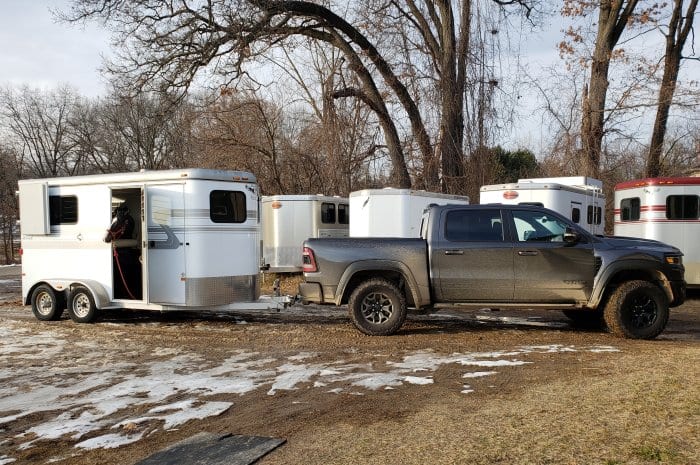 I took the horses from our farm to another farm about 20 miles away. It was all country driving, no highway, with some starts and stops. When moving, we were cruising at 35 to 50 miles per hour and, since I had live cargo, I was accelerating pretty gently. However, I was not driving in a way that would intentionally improve fuel economy numbers – I was just being easy on the live cargo, like I would with any vehicle. 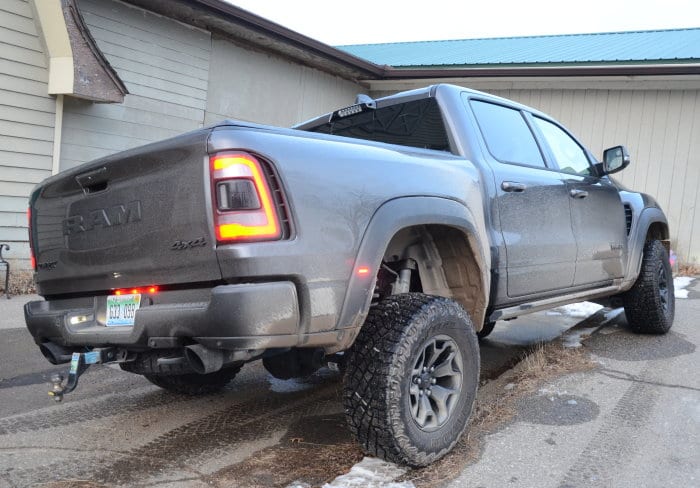 On that 20-mile drive with the horses in the trailer, the TRX got 8.4 miles per gallon. On the way home, with an empty trailer, I was using far more throttle. With a the 3,000-pound trailer behind the TRX while being driven slightly harder, I was able to get down into the 7mpg range. So, if you plan to drive the TRX hard with a 3,000-pound trailer out back, you can expect to get fuel economy in the 6-7mpg range. However, when driving reasonably with the trailer, I got better fuel economy numbers than some outlets without any additional weight. 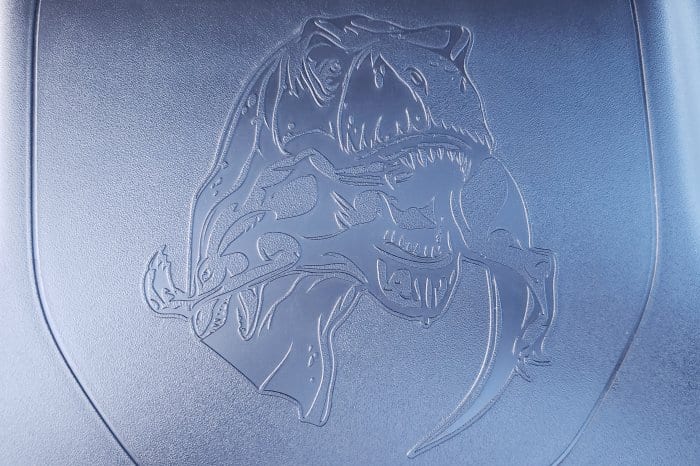 In other words, the Ram TRX is certainly not a “green vehicle”, but for a 6,500-pound truck with 702 horsepower, I think that getting 12.3 miles per gallon on the highway with the cruise set at 75 is a very acceptable number. If you drive the truck very hard all of the time, especially with some extra weight, you are going to see fuel economy numbers well into the single digits, but for those TRX owners who plan to use it as a daily driver, you won’t need to worry about those awful numbers when driving the truck “gently”.