The 2018 Dodge Challenger SRT Demon set the standard by which all other American muscle cars are judged and frankly, it seems unlikely that a factory-built Mustang or Camaro will ever come close to truly rivaling the 840-horsepower, 9-second Mopar monster. When you mentioned a Dodge Demon in most online groups today, most people will immediately think of the 2018 Challenger because that model has gotten so much attention in the past few years. 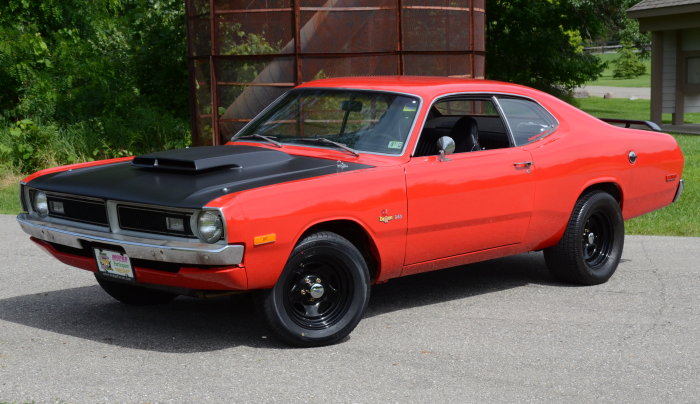 Many Mopar enthusiasts know that the Demon name was first used on a variant of the Dodge Dart back in 1971, but some people in the modern-model community are completely unaware that the Demon name had been used in the past. Also, even those who are familiar with the 1971 and 1972 Demon don’t know that when Dodge was first considering a name for their new fastback model, one of the considerations was “Beaver”. Rumor has it that when company executives learned that beaver was CB slang for a part of the female anatomy, they quickly moved onto other ideas. 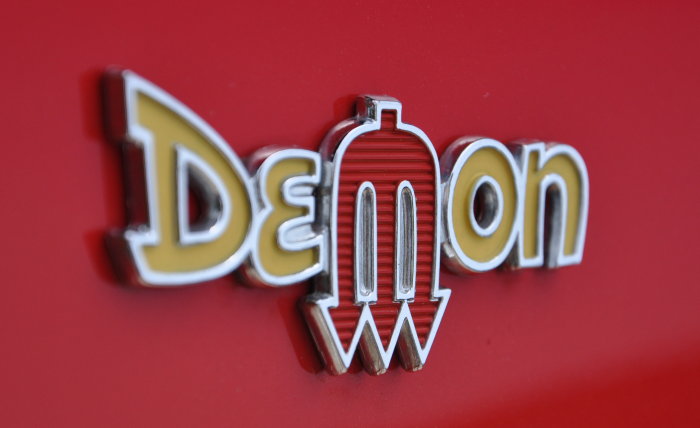 The Dodge Beaver 340 – can you imagine that? We should all be glad that Demon beat out Beaver, although the headache that was created over the Demon name back in the 1970s proved to be too much, and the name was changed to Dart Sport. 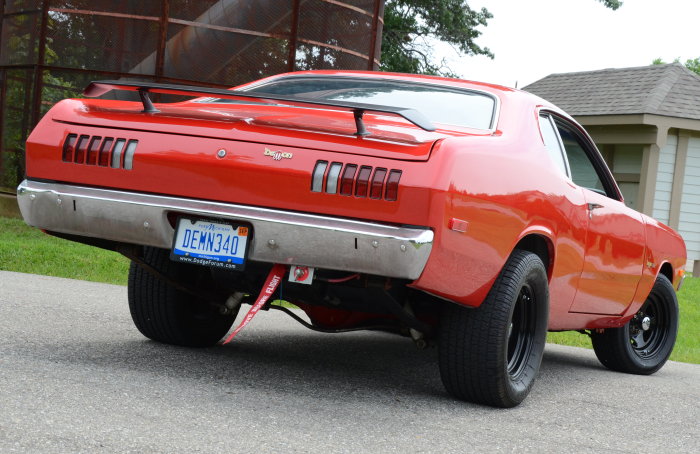 The “original” Dodge Dart Demon was introduced for the 1971 model year on the Chrysler Corporation A-Body platform, showcasing the identical fastback exterior styling of the 1970 Plymouth Duster. Although the Demon was built on the same chassis platform as the other 1971 Dart models, the fastback design offered improved aerodynamics, improved interior space and a more muscular look than the notchback style of the non-Demon Dart models. Since the two were so unique in their exterior forms, the Demon is rarely referred to as a Dart in casual conversation and most 1971 and 1972 Demon owners call them Demons, not Dart Demons. 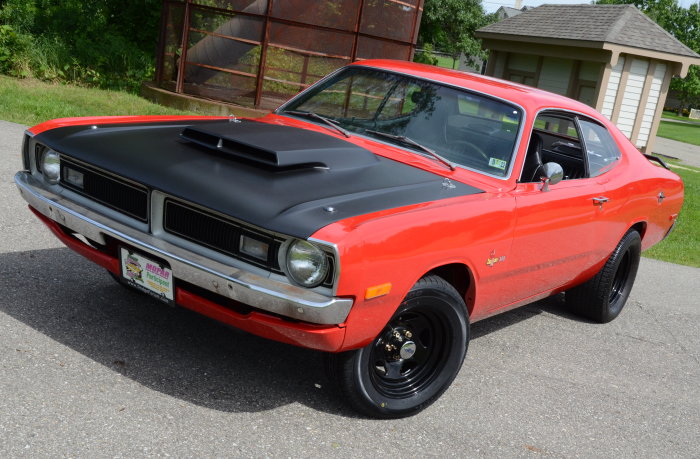 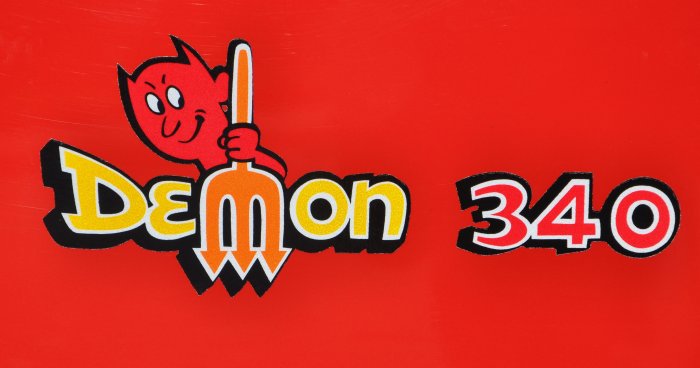 In addition to the 340 V8, the 1971 Demon 340 came with a synchronized 3-speed manual transmission (a 3-speed automatic transmission was optional), dual exhaust, performance brakes, a Sure-Grip differential with 3.23 gears, a heavy duty Rallye suspension setup and E70X14 Goodyear Polyglas GT tires wrapped around 14-inch wheels. Of course, it also had unique badging with the little cartoon devil and, when applicable, the 340 engine callout. 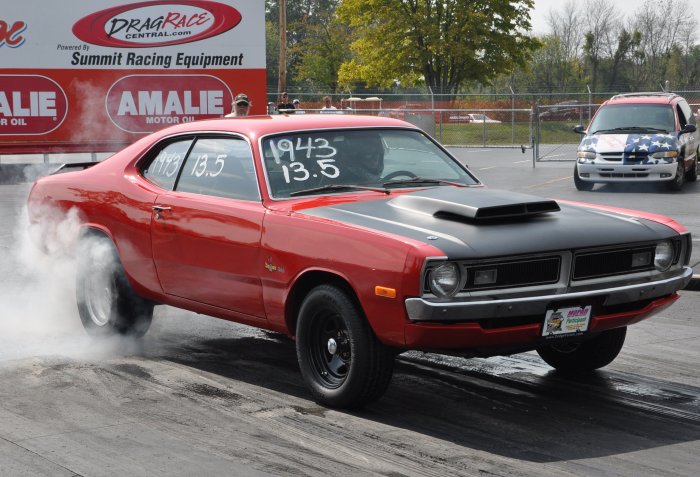 Dodge sold around 130,000 Demons in 1971 and 1972, with around 20,000 of those being 340 models. Unfortunately, some religious organizations around the United States were outraged that Dodge was promoting devil worship with one of their vehicles, so after pressure from these groups, the automaker changed the name of the Demon to the Dart Sport for the 1973 model year. 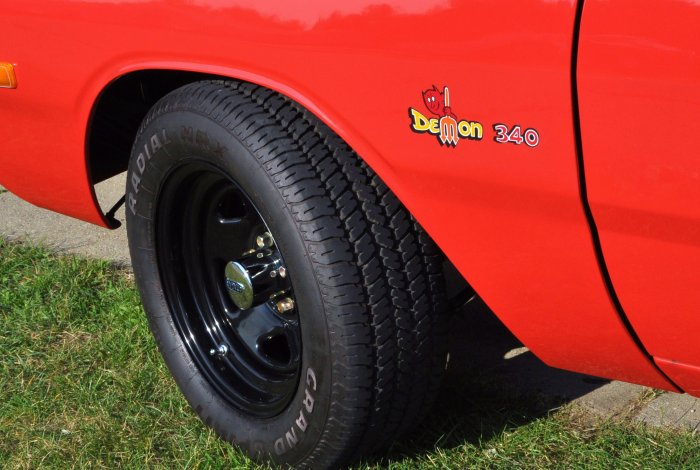 The red Demon 340 shown here is my car, shown alongside my 2017 Challenger Hellcat for scale. It is a near-stock 1972 model with a 1971 grille, a custom Challenger T/A-style hood and aftermarket wheels. It also has a taillight panel badge that is mounted in the wrong place from the previous owner and sooner or later, I will get that moved to the right spot.

When Dodge was part of DaimlerChrysler, the Demon named was used for a concept sports car that first debuted at the 2007 Geneva Motor Show. It was a compact 2-door roadster with front engine, rear-wheel-drive layout powered by a 2.4-liter 4-cylinder engine that delivered just 172 horsepower and 165 lb-ft of torque. It was basically Dodge’s idea to battle the likes of the Mazda Miata and the Pontiac Solstice, but it never made it past the concept stage. 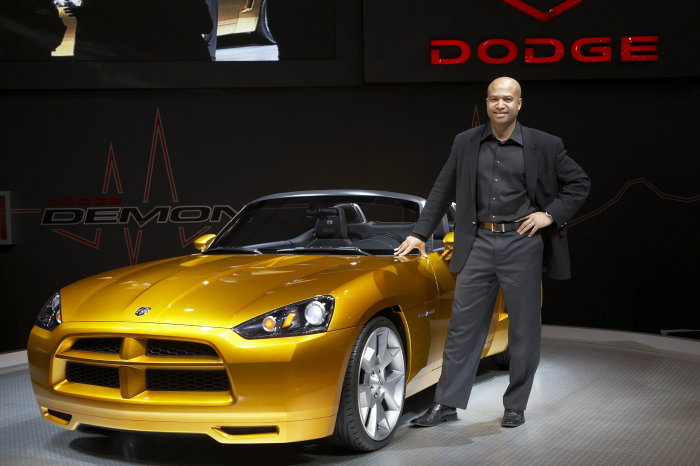 Of course, following the use of the 2007 concept, the Demon name would go unused until 2017, when the 2018 Dodge Challenger SRT Demon was introduced with 840 supercharged horsepower and the ability to run a 9-second quarter mile in stock form.