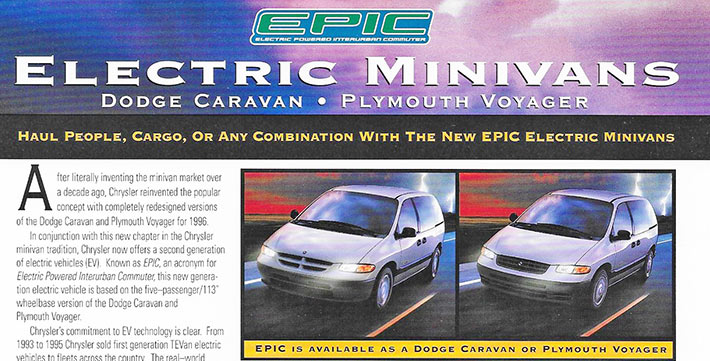 “Who killed the electric car?” asked a movie, some years ago, implying that General Motors deliberately destroyed the rebirth of electrics. The movie ignored Chrysler’s epic electric car program of the same time—a program which sold cars, rather than leasing them, and was something of a success.

Made in Plymouth and Dodge versions, the EPIC was actually Chrysler’s second generation electric minivan; the TEVan had started the ball rolling. Created as part of a project with the Electric Power Research Institute, the TEVan (T from the minivan’s T-115 code name, E for electric) used battery packs weighing nearly a full ton. Fleet sales were made in 1993 and 1994.

The minivans, which were built as electrics rather than converted, were made at the regular Windsor plant line, and were part of the “NS” minivan creation program from the start. They included air conditioners and five-passenger seating. The battery life was intended to be 100,000 miles or 20 years, with a built in battery water refilling system helping out; they were charged on 220 volts with a built in charger, but required three phase power.

The cost for driving them, according to one owner, worked out to be around the same as a 220-mpg car. There were some downsides, including a 70-horsepower motor and 80-mile range. The battery packs reportedly changed from lead-acid (nickel-iron) to nickel-cadmium to nickel-metal hydride as time went on.  According to James Cerano, manager of Team Epic, they sold 48 in 1993, then eight more in 1994; those 56 minivans had DC motors. Ten more, with AC motors, were sold in 1994. The minivan form was chosen, he said, because it was easy to package the batteries, and it was a big seller at the time;  the main goal of the program was getting customer feedback. Cerano said they learned that three-phase power was hard to find (so they went to 240V single-phase charging), and that the acceleration was far too slow (they dubbed it “same-day acceleration”), which resulted in the switch to the AC motor.

The second generation was the EPIC, as shown above; these were leased to government and utility fleets. The body was different, with a more raked windshield and modified A-pillar. In many ways, it presaged and tested aspects of the next generation minivans. At least 200 of these were made, and they won the five-day Tour de Sol in Customer Acceptability.  The EPIC’s top speed was 80 mph, and they had an 800 pound payload; they used nickel metal hydride batteries with thermal management, and boasted 100 peak horsepower, a hefty gain over the original 70. The company expected the batteries to last 4-6 years. Quick charge capacity was built in; the chargers were not. 0-60 mph came up in a leisurely 16 seconds. Regenerative braking was built in, along with air conditioning and a heat pump system.

The TEVans were sold to fleets; afterwards, some of them were sold to private owners at public auctions. The EPIC, on the other hand, was only leased, and they were most likely scrapped save for a handful that might or might not remain intact today.