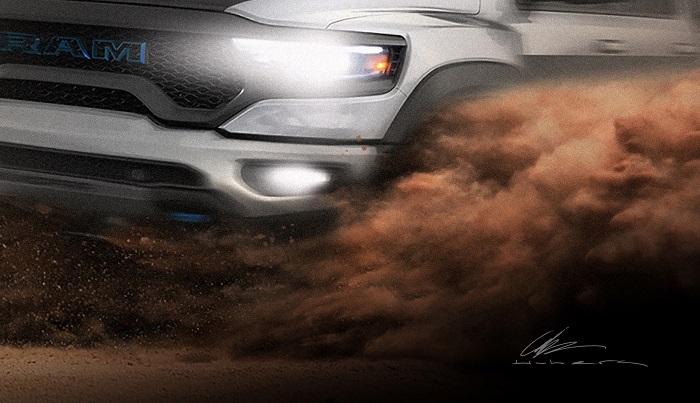 This morning, the folks at Mopar issued five teaser images of vehicles coming to the 2021 SEMA Show in Las Vegas.

There was no information included, with only this short statement accompanying the teaser images.

“Mopar will showcase customized vehicles and hundreds of quality-tested, factory-backed performance parts and accessories in its 15,345-square-foot exhibit in the South Hall of the Las Vegas Convention Center. “

That is also the caption for the images on the Stellantis media website, so there really isn’t much to go on in terms of official information, but we can make some guesses based on what we can see in these shadowy renderings. Most notably, we can tell that the vehicles teased appear to be a Ram 1500 TRX, a non-TRX Ram 1500, a Wrangler, a second Wrangler or a Gladiator and a classic military Jeep.

This first teaser clearly shows the grille, front bumper, headlights and front fender flare of the Ram 1500 TRX (shown above). The Hellcat-powered pickup is unquestionably the hottest performance vehicle in the truck world, so it is all-but-guaranteed that Mopar would have a customized TRX on display at the 2021 SEMA Show.

Unfortunately, the images is cropped tightly enough that we really can’t see any custom aspects or obvious modifications. It does appear to have a unique paint job, with the hood and bodysides having both light and dark gray with blue tow hooks and a blue RAM grille badge, but beyond that, it is all a guessing game.

We expect that it will be lifted, with custom wheels, perhaps some custom additions in the bed, Katzkin leather interior and some extra power from the supercharged Hemi. Maybe they will go really crazy and put a Redeye or Hellephant engine in it.

Next, we have this rear shot of what appears to be a Ram 1500. It appears to be lifted on aggressive off-road tires, with a large bed rack and unique black-and-blue graphics. 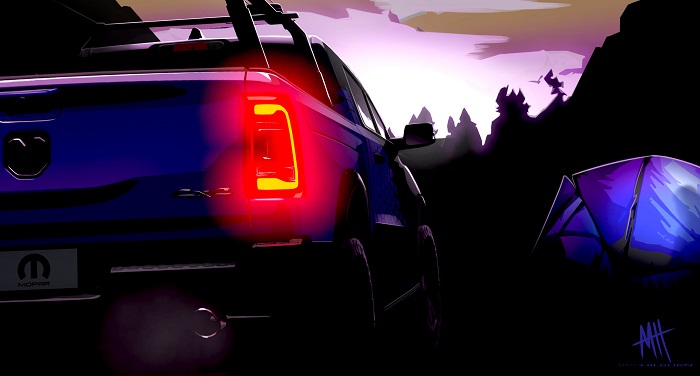 The graphics appear to be a honeycomb design and the image is set in the woods, with a tent nearby, so this is likely to be an off-road adventurer concept of some sort. The fact that the exhaust tip is so shiny leads us to believe that it will have Mopar exhaust upgrades.

Next up, we have this driver’s side front fender image of what appears to be a Jeep Wrangler Rubicon 4xe – or at least it is a Jeep and it is a Rubicon with the 4xe charging door. 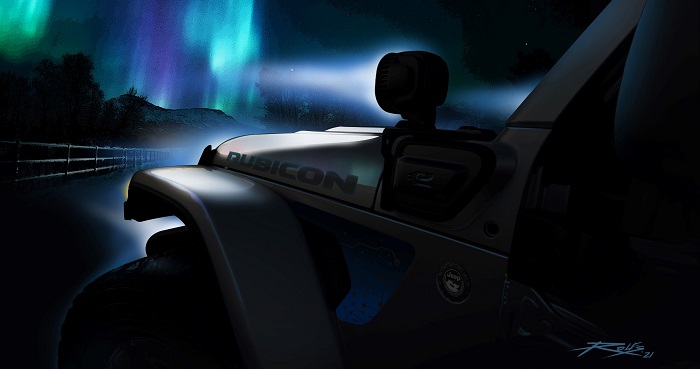 It also appears to have some unique electrical-themed graphics on the fenders, Jeep Performance Parts off-road lights and some king of custom-style door. It is hard to tell whether it has tube doors or something else, but the difference in color from the fender to the door area suggests some changes there. The wheel gap looks big as well, so it is likely that this Wrangler is lifted, possibly on larger aftermarket wheels and tires.

The hardest image to distinguish shows the interior of a Jeep Wrangler from the rear with some sort of unusual roof design. 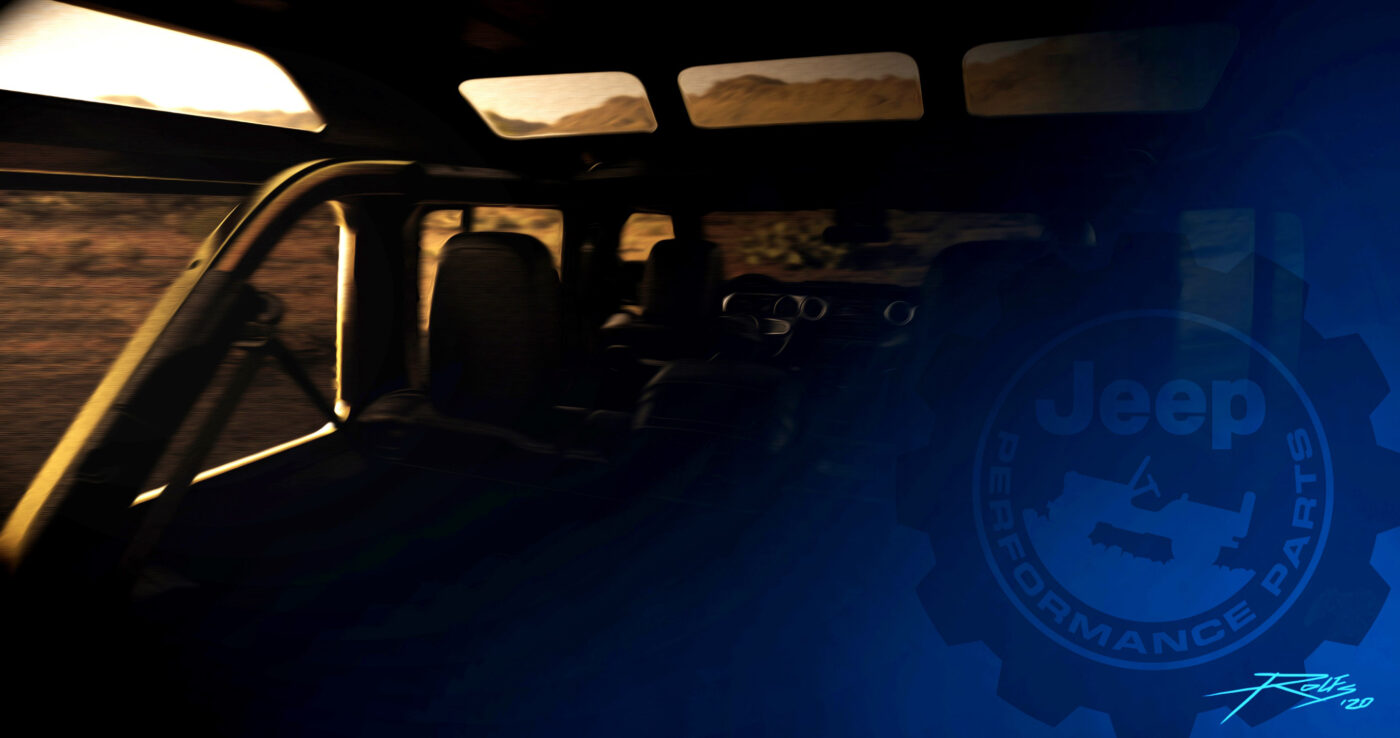 There are what appears to be windows across the front and along the sides, providing better views for the people in the back. This roof also looks to be a little taller, so it may open up some headroom for rear riders as well.

At the 2019 SEMA Show, the Mopar Five Quarter was a unique custom pickup based on the 1968 Kaiser Jeep M-715 military machine. That truck was powered by a Hellcat Hemi crate engine, with suspension and chassis components to make it an unstoppable off-road beast. 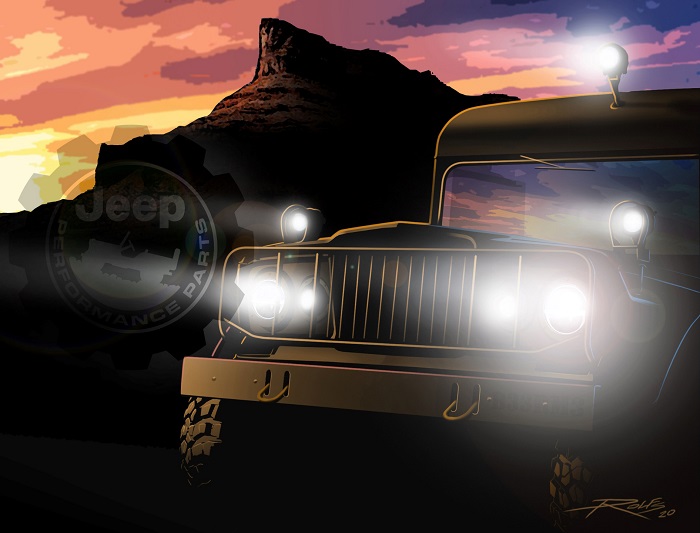 Update: We initially thought that this was another M-715, but a member of the TRX community pointed out that this looks more like an ambulance version, which would be an M-725, not M-715. As you can see, this antique Jeep appears to have a larger cab design, similar to that of a military vehicle made to haul soldiers. The only obvious upgrades are extra lights, but we imagine that this is far more than just a classic military Jeep with upgraded exterior lighting.

The 2021 SEMA Show is held in Las Vegas on November 2nd through the 5th, and you can be sure to find all of the details from the Moparized machines here on Stellpower.