Earlier this week, Tony Stewart Racing issued a media advisory, shown below. As you can see, it states that Tony Stewart and NHRA President Glen Cromwell will be in attendance for a major announcement at zMax Dragway in North Carolina. It also lists Stewart’s successes as a team owner, but no other information is provided. 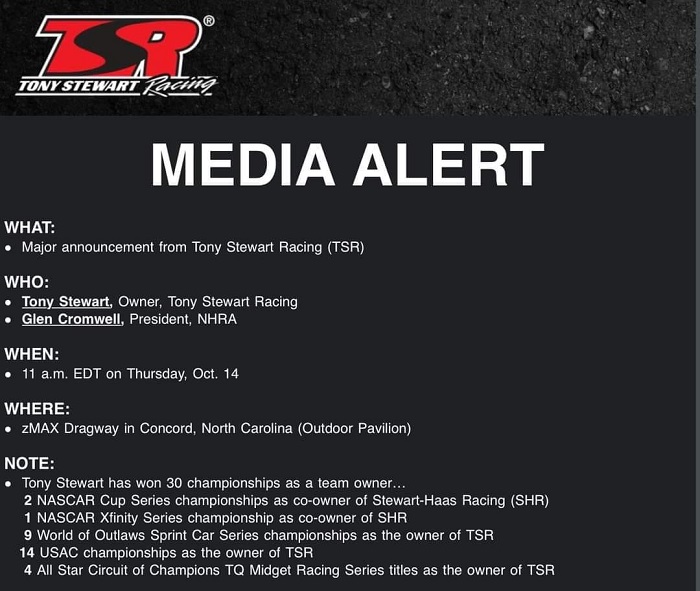 UPDATE: It was announced on the morning of October 14th that Leah Pruett and Matt Hagan will be leaving Don Schumacher Racing to drive for Tony Stewart Racing in 2022. Click here for the whole story.

Based on the limited details in the media advisory – Tony Stewart at an NHRA track with the NHRA President, making a major announcement that relates to his success as a race team owner in other forms of motorsports – it seems likely that Stewart will be introducing his plans for an NHRA team. That is speculation, but based on what we can see in the media advisory, the odds are good that the NASCAR legend will make his entry into the drag racing big leagues as a team owner.

Why are we talking about this on a site that focuses on Mopar and Stellantis corporate news? Well, Tony Stewart is currently engaged-to-be-married to Leah Pruett. The image below shows the two of them together, from Stewart’s Facebook page. Pruett is a successful NHRA driver, competing in both the Top Fuel Dragster and Factory Stock Showdown classes over the past few years. More importantly for this discussion, Leah Pruett is sponsored by Mopar/Dodge. 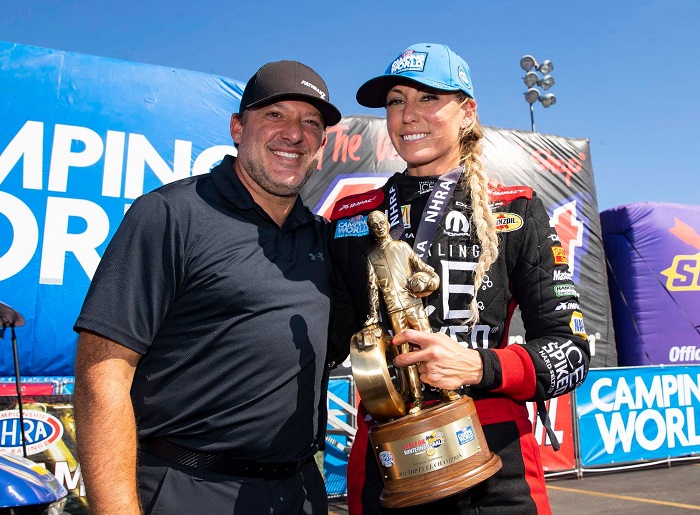 With Stewart and Pruett set to be married, it seems likely that if Stewart were to start his own race team, his wife would be his driver. Pruett is one of the top drivers in the Top Fuel Dragster class, so having someone like her at the wheel would give Stewart’s race team a great opportunity to be competitive right away. The question is whether or not Mopar/Dodge would “follow” Pruett to her new team, should she leave to drive for her husband’s new race team.

In most cases, it seems like a relatively easy move for Mopar, but keep in mind that Mopar is involved with Don Schumacher Racing aside from the sponsorship of Pruett’s race car. DSR is involved with the distribution of the Mopar Challenger Drag Pak and components for the Drag Pak cars, along with some aspects of the Mopar crate engine program. In short, Mopar’s involvement with Don Schumacher Racing goes well beyond a normal race car sponsorship deal, so it is unclear whether Mopar would continue to sponsor the DSR Top Fuel car with another driver, or if Mopar will move with Pruett to the new Tony Stewart Racing (TSR) team.

Ultimately, if Tony Stewart does announce a new NHRA race team tomorrow, it will create lots of questions for Mopar racing fans. If Mopar does go with Pruett to TSR, where does that leave Don Schumacher Racing? Will Tony Stewart Racing be the second Mopar team? Will it include Pruett’s FSS Challenger Drag Pak as well? Every Mopar drag racing fan would hate to see her leave Top Fuel, but as a key installation in the Drag Pak program, we are really hoping that a move to a new race team doesn’t include a new brand as well.

Of course, all of this speculation could prove to be pointless if Tony Stewart is making some other sort of announcement, but it he does introduce plans for a new NHRA race team, it could lead to some shake-ups in the Mopar racing program.

We should know more by noon tomorrow.