So what is HWY 93? According to the press release, this campaign is based around an interactive map which contains a curated list “events, drag strips, iconic drives, restaurants, roadhouses, lodging and other attractions that the Brotherhood of Muscle can use to build their ultimate summer roadmap”. This list of events is being called “highway 93” in honor of the 93 days of summer that stretch from late June through late September. The brand set up this unique website to help enthusiasts find those various points of interest.

“HWY 93 is more than just a highway, it’s a mindset; one that stretches across all 93 days between June and September, past the coolest events and hottest locations in America,” said Tim Kuniskis, Dodge brand chief executive officer – Stellantis. “Summer is the best time of year for Dodge, it’s when the shackles of winter come off, and drivers are free to get the absolute most out of the longest days of the year. And Dodge, with the Brotherhood of Muscle, is going to blaze a path across the United States that leaves no roadhouse, rest stop or drag strip unturned.

And with more than 13 million – and growing – devoted fans across our social media channels, Dodge has automotive’s most active and engaged muscle car following, and their passion and excitement for the brand are all but impossible to recreate on our own. So we’re going to collect user-generated content from our biggest fans, including the 93 days, and put our Real Brotherhood of Muscle in the driver’s seat of the Dodge brand’s next national campaign.”

In the image below, we have included a screenshot of the Dodge HWY 93 map, focusing on my home state of Michigan. In the state of Michigan, we can currently see six points of interest – three light blue, two red and one yellow. The three light blue are the Modern Street Hemi Shootout event at Milan Dragway, Roadkill Nights at M1 Concourse and the NMCA Power Festival at US 131 Motorsports Park. The two red are the Mid Michigan Motorplex and Lapeer Dragway and the one yellow is the Vinsetta Garage, a gas station-themed restaurant along Woodward Avenue. 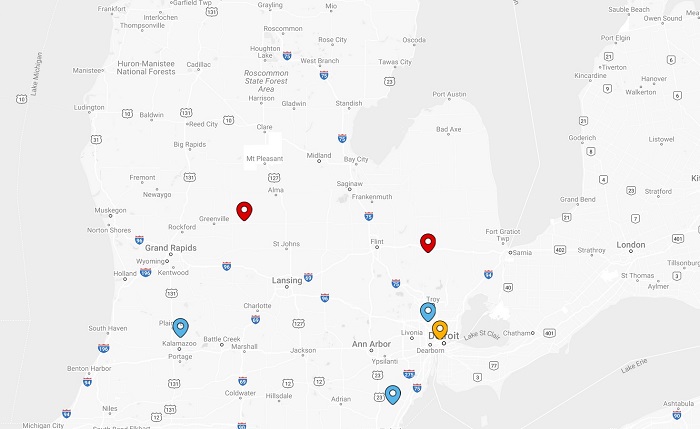 Fans of the brand are asked to suggest their own possible locations on the map and for those Dodge drivers who visit the points of interest on the HWY 93 map, they are asked to upload their content to social media. When the 93 days of summer have ended, Dodge will launch “The Real Brotherhood of Muscle” national advertising campaign which will showcase the “most compelling video content from Dodge enthusiasts” on YouTube, Facebook, TikTok and Instagram.