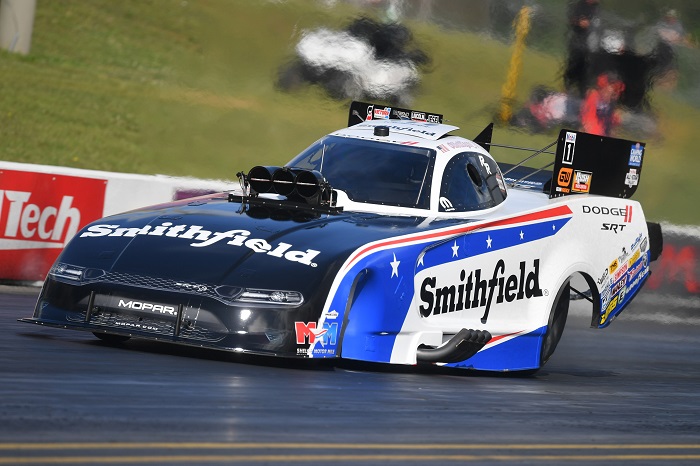 This past weekend, the NHRA Camping World Drag Racing Series headed to Virginia Motorsports Park for the 2022 Virginia Nationals. Tony Stewart Racing Funny Car driver Matt Hagan hails from Christiansburg, Virginia, just under 200 miles from the venue, making VMP somewhat of Hagan’s home track. He used that familiarity to set two records at the Virginia Nationals in his Dodge Charger funny car, but unfortunately, he fell just one round win short of the Wally. 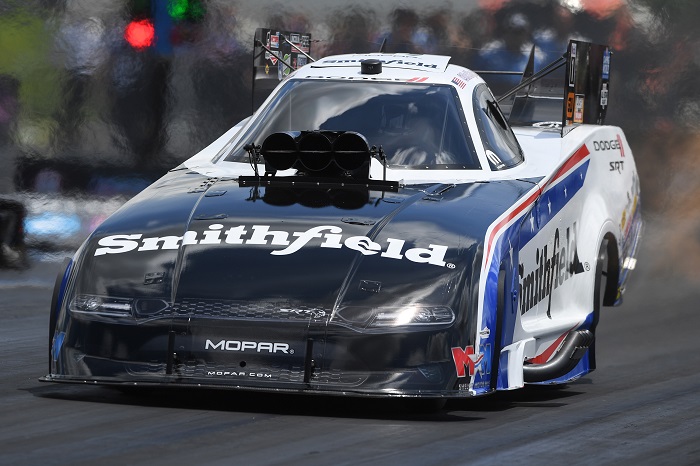 Matt Hagan hit the track hard in Virginia in hs Dodge Charger SRT Hellcat funny car, running a 3.914 at 335.82 miles per hour to secure the top spot in the class in the first round of qualifying. That trap speed beats the previous funny car track record by almost 10 miles per hour, with the old record being set by John Force back in 2019. However, there weren’t many other clean passes in the first round of qualifying, with only four of the 15 drivers making good runs on their first time out.

The field got a whole lot quicker in the second round, with Ron Capps driving his new Toyota race car into the top spot with a 3.864 at 332.75, pushing Hagan into the second spot, even though he improved on his first pass time with a 3.890 at 329.5. Meanwhile, Cruz Pedregon ran a 3.905 at 323.27 in the second round of qualifying, putting him in the fourth spot.

Finally, in the third round of qualifying, Hagan set another record, running a 3.853 with his Dodge Charger SRT Hellcat funny car, resetting the E.T. record for the class. That allowed him to jump back into the top spot, so headed into eliminations, Hagan had set the class record for elapsed time and trap speed while Pedregon started in the fourth spot.

Matt Hagan had a solo pass in the first round due to another short funny car field, but he still ran a respectable 3.964 on his free pass. Pedregon took on Phil Burkhart in the first round and won cleanly in the other Dodge factory-backed machine, but things got much tougher in E2.

Hagan disposed of second round opponent Chad Green pretty handily, but Pedregon had major traction issues right after the start against John Force, giving the Camaro the easy win. In the other two races in E2, Robert Hight beat Toyota driver Ron Capps and Bob Tasca III drove his Ford Mustang into the semis by beating Blake Alexander.

The semifinals saw a pair of John Force Racing Chevrolet Camaro funny cars, each taking on a key competitor from a Detroit automaker. John Force faced off against Matt Hagan in a great Dodge-vs-Chevy battle, but when Force redlit, Hagan got the free win, but he still ran a 3.955 at 327. On the other side of the ladder, #10 qualifier Robert Hight took on #14 qualifier Bob Tasca III in his Mustang. Although Tasca pulled a big holeshot advantage, Hight drove around him on the big end to take the win – setting up yet another Dodge-vs-Chevy battle in the finals. 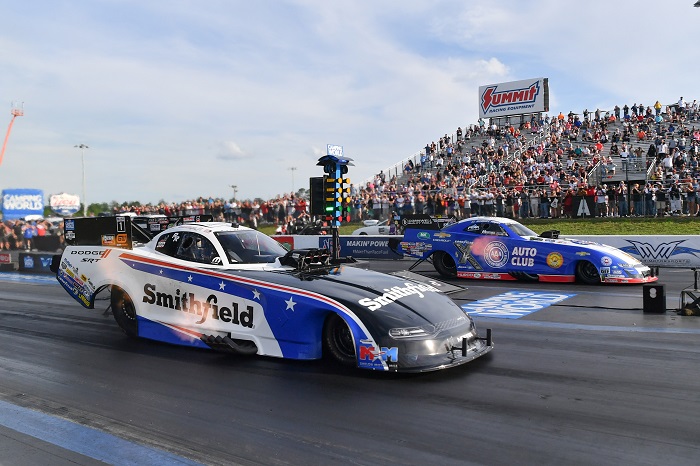 The finals in Funny Car at the Virginia Nationals was exactly the kind of drag race that fans love to see. Hagan got off of the line a touch quicker in his Dodge Charger, holding the early-but-narrow lead as the two raced side-by-side down the track. As they reached half-track, Hight’s Camaro had inched ahead and Hagan wasnt able to close the gap, giving the win to the JFR Chevy. Hight won with a 3.907 to Hagan’s 3.948.

With the runner-up finish, Matt Hagan has held onto the top spot in the 2022 NHRA Championship race as the series has gotten through the first third of the season. Hagan has 673 spots to lead the class, with Hight 15 points back in second and Ron Capps in third, 112 points out of the lead. Cruz Pedregon sits fifth, 278 points behind Hagan.