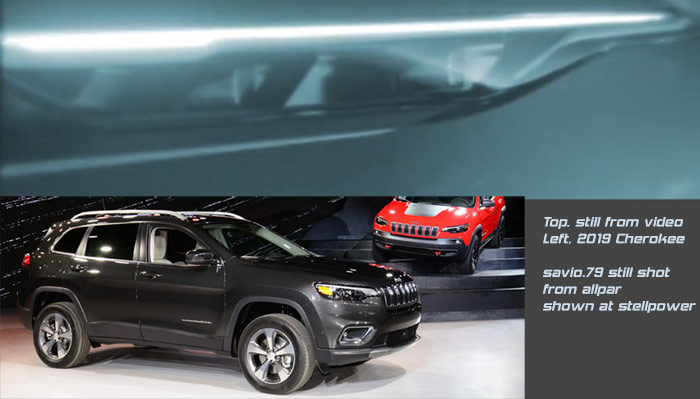 Update: No new Cherokee was revealed today, but a brand new, unexpected Jeep Recon with removable doors was previewed along with the Jeep Avenger for Europe and the BEV Wagoneer S. A new Cherokee might still be planned, but the Recon might be a replacement for the Cherokee, too.

Jeep is holding a 4xe Day tomorrow to discuss its electrification plans. It’s possible that the next-generation Jeep Cherokee, body code KM, may be revealed. Update: It’s also possible that the new vehicle will be a refresh of the Renegade or a new STLA-platformed Jeep BEV. It’s even possible that the reveal could be a new powertrain for the Compass, which is likely to get the Dodge Hornet powertrain options.

A Jeep video on YouTube shows images that might be the next-generation Cherokee. A discussion on Allpar shows still shots from the video which may reveal some of the concept KM Cherokee.

Little is known of the 2024 Jeep Cherokee so far; the current model ceases production sometime in mid-2023, before a factory changeover. An all-electric version seems likely if the next-gen Cherokee is made in the same factory as the current model, due to state subsidies for BEV production.

Chances are the next Cherokee will be larger than the current model, which is not well differentiated from the Compass. The rumor mill claims it will be based on STLA Large, but it’s hard to know how much of this is based on reality vs speculation vs wishful thinking (from those who would prefer Cherokee to have rear wheel drive). Likewise, the off-road capabilities of the new model remain unknown. The Ford Bronco’s long-travel independent suspension has been a key selling point, and Rivian has achieved rather stunning off-road capabilities with its combination of electric propulsion and a long-travel independent suspension.