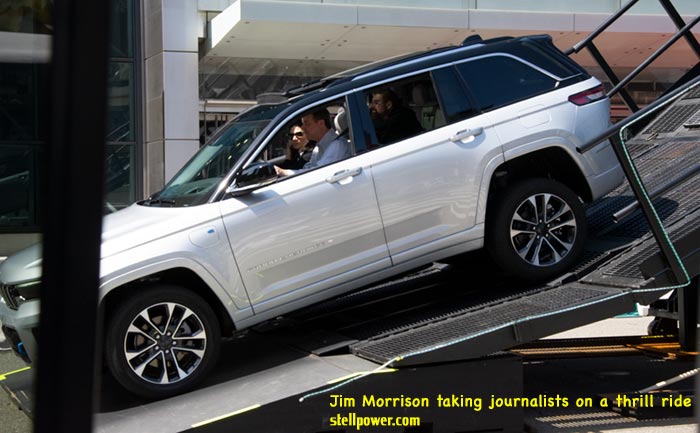 Jim Morrison, head of Jeep, told Motor Authority that the Hemi will not be the Grand Cherokee’s performance engine in the future, according to an article by Joel Feder. That also means, he said, that the Gladiator would probably not have a 392 V8 stuffed into it.

The Trackhawk model might be destined for history, according to Morrison, while there will be more 4xe Jeeps. There might be a variation of Trackhawk, though, based on electric or hybrid-electric powertrains.

The new Grand Cherokee 4xe handled the Camp Jeep course with aplomb. While not as quick as a 392 Grand Cherokee would be, it is nearly a full second quicker in zero-to-sixty sprints and gets better economy than then 5.7 Hemi. There will still be performance versions of the Grand Cherokee, but Morrison didn’t confirm (or deny) that they would be based on the Hurricane, which has a 420 hp and a 510 hp version.

He also confirmed that a full-electric or hybrid-electric powertrain would be on all Jeeps by 2025. Morrison, an off-road enthusiast, also said that the 4xe Wrangler at the Easter Jeep Safari was his favorite package; riding on 37 inch wheels, “It goes anywhere,” according to the story.

its no secret that the 5.7L and 6.4L & Hellcat engines are going to be decommissioned. At this point it’s common knowledge. We all know the GME-T6 and GME-T6 are the replacement engines for both Hemi V8s and that an electric powertrain is going to be at the top of the heap. Here’s the real thing, and this statement holds true for the upcoming Dodge Muscle cars as well as the Jeep Grand Cherokee performance model and Wrangler/Gladiator. Direct Connection needs to be on top of things when it comes to these two new engines. To be honest, Direct connection need to already be developing upgrades for these two powertrains as we speak. Exhaust systems, downpipes, wastegate/blow off valve upgrades, tuners, fuel system, intercooler, upgrades, suspension, brakes, etc. Jailbreak models need to be already available from launch. The next gen cars need to be upgradable from Mopar right from the jump. Honestly it’s time to let the Challenger go and turn the Charger into more of a Gran-Coupe like the BMW M8 with cues from the ’99 Concept along with the TRX front end like the concept thing that was done a few months ago, with a widebody option that falls more in line of what Ford did with the GT350/GT500 than the add-on fender flare look that Dodge currently has. It should still be Dodge aggressive but more modern and still have the Coke bottle styling and side scallops the Charger is known for. It should follow the new Durango & TRX as far as the interior goes. Honestly I am looking forward to the new GME-T6 and next gen charger. hopefully they don’t disappoint