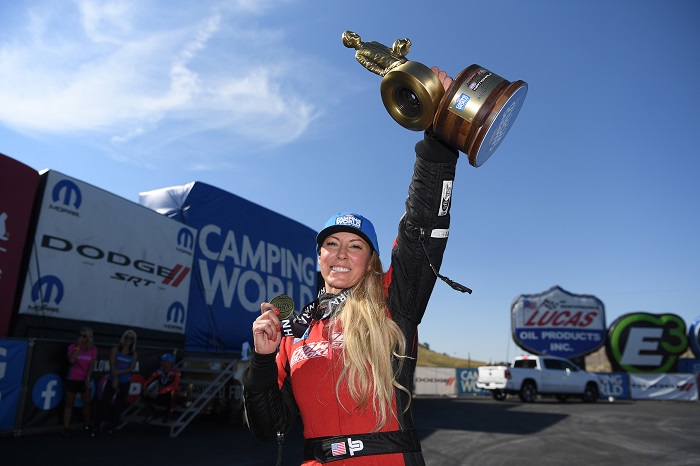 This past weekend, the NHRA Camping World Championship Drag Racing series headed to Bandimere Speedway for the Dodge Power Brokers Mile-High Nationals, so it was fitting that Leah Pruett recorded her first win with Tony Stewart Racing in her Dodge Power Brokers-sponsored Top Fuel Dragster. Pruett put together a series of smoking fast runs to rocket to the final round, where she ended up making a very quick single pass for the win. 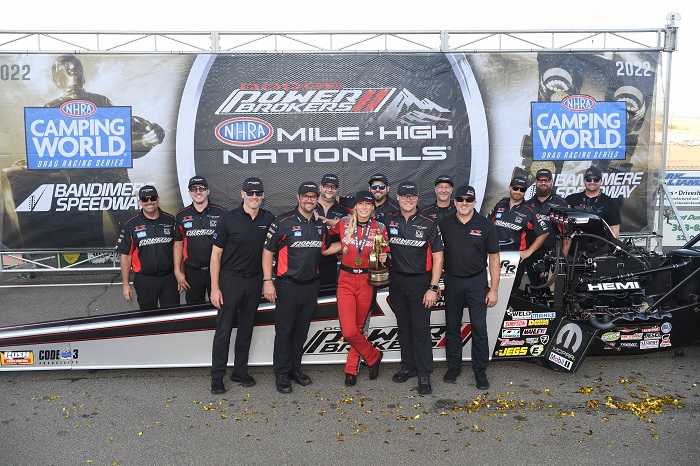 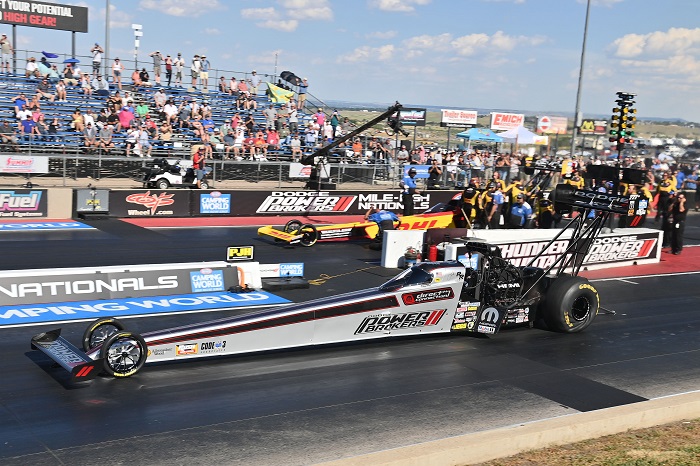 In the finals, Pruett was set to run Shawn Langdon, but Langdon’s dragster ran into mechanical issues during the burnout. As a result, Pruett had a single pass to the win, meaning that all she had to do was stage the car, take the green light and cruise down the track – but instead, she gave the crowd one last show, running a 3.884 at 316.38 miles per hour.

As mentioned above, this was Pruett’s first win with her new Tony Stewart Racing team, second at Bandimere and 10th of her career. More importantly, this win moved her up into the 6th spot in the race for the championship. She is 337 points out of the top spot, but so long as she is in the top ten after the U.S Nationals – when the field resets for the Countdown to the Championship.

While Leah Pruett had a great weekend in her Dodge Power Brokers Top Fuel Dragster, the Dodge funny car teams struggled. Matt Hagan qualified in the top spot and Cruz Pedregon qualified ninth, but eliminations went poorly for both of them. Hagan smoked the tires in the first round and couldn’t get the car to hook, allowing Jack Wyatt to get the his first round win since 2009. As for Cruz, he took on J.R. Todd and when Todd got out to an early lead, Pedregon couldn’t catch up and the Toyota took the win.

With the early exit, Hagan sits in second place in the championship standings, 95 points behind Robert Hight. Cruz Pedregon is sixth, 457 points out of the lead, but again, all that matters during the “regular season” is staying in the top ten.