Mopar-related social media exploded when the Hurricane hit the news, but there are some misconceptions out there which can be addressed with the data already issued by Stellantis.

First, as many have noted, this engine is closely based on the 2.0 liter four-cylinder; it is, in fact, the same displacement as a 2.0 with an extra pair of cylinders, which makes sense since the combustion chambers, cylinder spacing, and such are identical. Originally, rumor had a tighter cylinder spacing to make it more compact, but that apparently was not needed; it is quite compact for an inline six regardless. Iron cylinder liners were eschewed for a more advanced hardening technique to provide more aluminum between the cylinders (for cooling), rather than to have the cylinders closer to each other.

Originally, we believed the engine was meant primarily for Ram pickups; they will still be used there, but will almost certainly be used in the Grand Cherokee, Wagoneer, and next-generation large cars, as well. Indeed, it might have allowed for the next generation large cars to have a smaller engine bay, saving weight (or providing more space for the interior). It also cuts around 150 pounds of weight, which is handy for acceleration and fuel economy.

If you are confused about which engines we will see in the future, our simple chart is:

In every case, the replacement engines that have already been shown have a wider torque curve, lighter weight, and better overall performance than the older ones. They also generally use the same fuel grade—with the exception of the standard output Hurricane. That can use regular fuel, unlike the midgrade-liking 5.7, but owners get more power with premium. The high output Hurricane requires premium fuel, but so does the “392” 6.4 Hemi it is replacing. 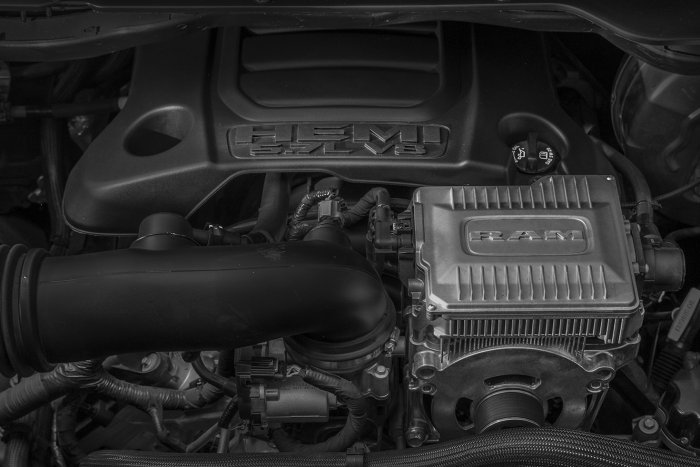 The end of the 5.7 Hemi has been rumored for quite a while

The future of the 2.4, 3.2, 3.6, and various Hemis is a bit cloudy. Originally, we were led to believe that the final V8s would be made in 2023. This might or might not be the case. Replacing the 6.4 V8 in trucks might be tricky, and factory output might not be high enough to stop Hemi production at the end of next year. The 3.2 V6 is likely to end within a year from now. The 2.4 is still used in two vehicles and may wait for their next generations, but it’s unlikely it will still be around in mid-2024. That leaves the 3.6 V6, which again is replaced by the GME 2.0 turbo (dubbed Tornado, but for whatever reason not marketed under that name). The GME 2T is still in the ramp-up phase in Indiana, and it may take some time for the 3.6 to leave the Wrangler, Gladiator, Pacifica, ProMaster, 300, Charger, Challenger, Grand Cherokee, and Ram 1500. That said, while it has been an excellent engine overall, it will likely not see the year 2030.