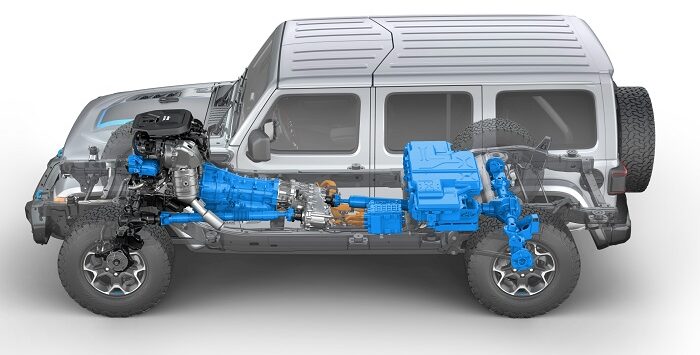 The Wrangler 4xe, FCA US’ most popular plug-in hybrid despite years of selling PHEV minivans, has been out long enough for people to get some idea of how much money they may save by driving one, versus the standard gasoline engines. The four-cylinder-turbo-plus-motor 4xe system generates nearly the same acceleration as the big 392 V8, with roughly the same EPA mileage as the base V6 gasoline engine.

Allpar member and longtime moderator valiant67 purchased two 2023 Wrangler 4xes, both in Sahara trim, coincidentally made around an hour apart from each other. The two vehicles are in different service cycles, though, with the first one seeing mostly highway use and the second traveling urban and rural roads with little highway travel.

According to this Allpar member, the cost to charge the batteries fully is around $1.05 (but just 15¢ with the local utility’s overnight rates). The Jeeps come with regenerative braking, so the batteries are not limited to power from the plug; they act as a normal hybrid-electric when the initial charge is used. As he wrote, even when the charge indicator shows 0 miles, the motor can accelerate from 0-10 mph before the engine is needed; “it’s not like you’re just hauling around extra weight once it gets to 0 miles. You’re still getting a economy and performance boost.” He rated performance as good, though not as satisfying as the Hemi Challenger.

As for costs: the 4xe is a pricey option, but the Wrangler is a heavy fuel user without it. The EPA ratings are either 18 city and 23 highway (20 combined) with the base V6; or 21 city and 24 highway with the gasoline-only turbo four-cylinder. That’s a three mile per gallon advantage without even adding the hybrid feature, which raises economy to 20 mpg combined without electric power, and 49 MPGe with it; electric power lasts around 22 miles, according to the EPA, which estimated annual fuel prices at $2,100 total (assuming $2.51 to charge the battery). The base V6 has a reported annual fuel cost of $2,850. (Costs are based on $3.77/gallon pricing.)

This owner, though, reported 29 mpg in gasoline mode with the mostly-highway Wrangler and around 27 mpg with the mostly-not-highway model. Between that and the lower electricity costs, the 4xe cost-benefit equation is hard to argue with—especially considering that the 4xe is the second fastest powertrain available for Wranglers. The high mileage of the 4xe compared with the 392 (13 city, 17 highway, 14 combined) results in a $2,850/year savings, according to the EPA. That’s a hefty savings.