Concept cars are shown for a variety of reasons—to test new functional ideas, to test looks, and to show that the company is working on new technologies. Past Chrysler concept cars have run the gamut from pre-production models to thoughts about what they might make in 20 years, and often the main idea being tested are quite different from what people think is being tested. 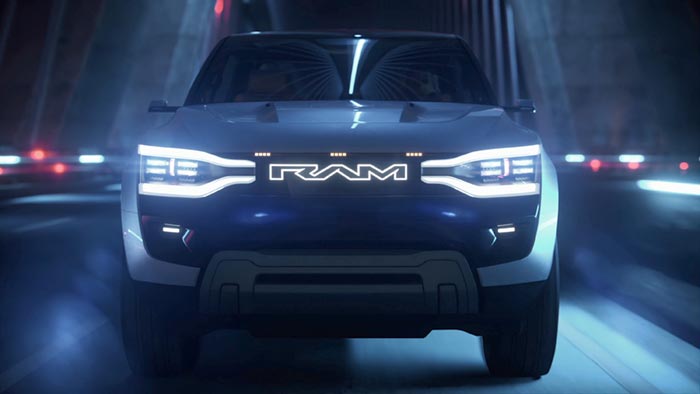 Which brings us to the 2023 Ram 1500 Revolution BEV Concept. What exactly are they testing? We have a number of options, including the styling, the design, the technologies, and the powertrain. If you get impatient, just scroll down—we know truck people want to know about towing, hauling, and range, and some people just want to know about tech, and others want to learn about STLA Large.

To answer the question: yes, this is a real work truck, though it doesn’t look like it. The bed looks small, but appearances can deceive; it’s apparently the same length as the current Ram pickup bed.

The feature that may have gotten the most attention and headlines is “follow me,” basically, where the driver can walk around with the truck following (and avoiding obstacles and people along the way), handy in construction sites, or for cleaning up debris, or perhaps for trying to follow the trail of Old West bank robbers. This is a clever variation on Tesla’s snazzy parking-lot “come out for me” tool, but presumably uses both cameras and radar to avoid hitting anything. 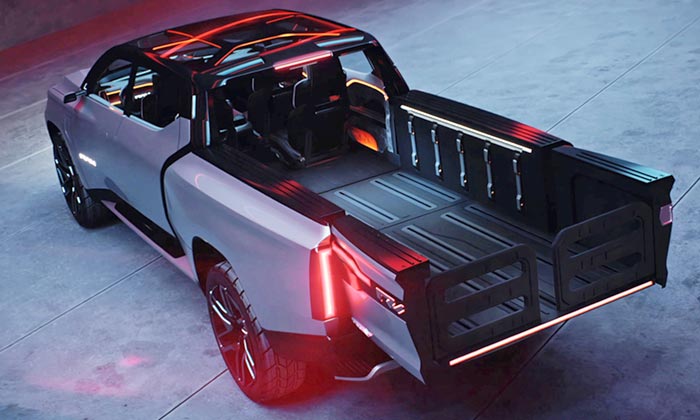 The rear view mirror includes a smart backup camera with 360-degree views (in Reverse), speakers, and receivers compatible with Alexa and Siri.  The mirror also includes a backup flood lamp in Reverse for low light conditions; and communicates with biometric cameras that observe the truck’s environment as it approaches objects and as it’s being approached.

The steering wheel has a flat top and bottom and is collapsible, with enhanced hand grips, capacitive controls, digital screens, and a lit “RAM” badge. Occupants can use tactile swiping to configure the sun visors or the electro-chromatic roof.

The adjustable air suspension has ingress/egress, aero, and off-road modes (from lowest to highest).

Other technological gizmos include: 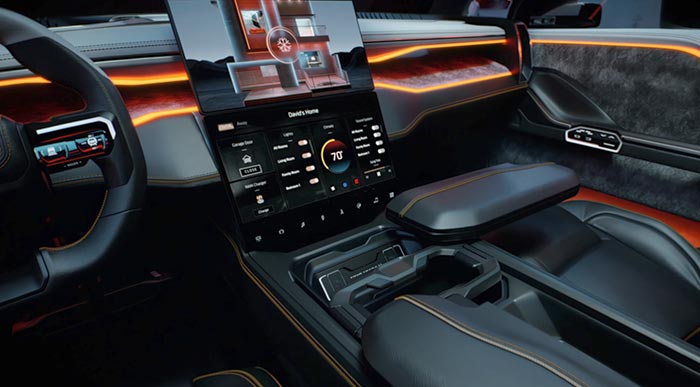 The Ram 1500 Revolution BEV Concept has all wheel drive, powered by two electric drive module (EDMs), on in front and one in rear. It can take larger-capacity EDMs, but the concept is currently set up with—an unreleased amount of power. It does have 800V DC fast charging up to 350 kW, allowing 100 miles of range to be added in around 10 minutes. So far no information on the concept’s range, acceleration, towing capacity, etc. has been released; STLA Frame was reportedly going to have battery packs with 159 to 200 kWh capacities.

The new and cleverly named Ram Charger takes cues from robotic vacuums to sneak underneath the vehicle when the truck is detected, align itself, and start charging; it can be programmed to only charge during off-peak hours for greater economy.

The four wheel steering allows for up to 15° of articulation for better cornering at low speed, e.g. for parking or tight trails. It also increases steering response at high speeds.

The Ram 1500 Revolution BEV Concept takes the “midgate” from the 2002 Chevrolet Avalanche and BEV engineering to provide for loads up to 18 feet (5 meters). The midgate in the concept is powered.

The doors, like those of too many concepts, are “suicide door” style, with the front door opening normally and the rear door opening the other way, to allow for a massive entry space (with no B-pillar). This is unlikely to make it to production. More useful is the integrated fascia with a skid plate and tow hooks that can pivot to sit flush. 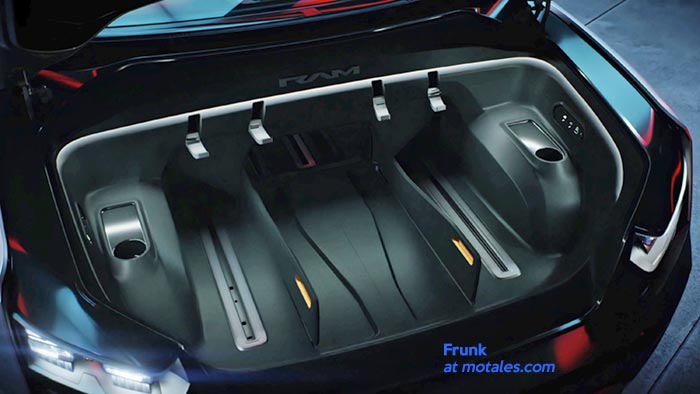 The BEV design provides more space for storage; a powered “frunk” (front trunk) has extra weather-and-thief-protected storage, with a one-touch open/close function. The charge port door (on the driver’s side front quarter) is also powered, as is the tailgate, the door handles (which is why you don’t see them in photos), side steps, and rear step. The latter includes an active diffuser for aerodynamics. Which of these are likely to make it to production? Probably everything but the charge port door, unless they have already designed a manual override.

The side view “mirrors” are basically cameras, allowing them to be quite small; these may not yet be legal in the United States.

The RamBox is larger than in current Rams. A Dodge-like hourglass body design adds some muscle-like styling, while the concept allows for 35-inch tires (the wheels are 24 inches and have caps that light up and stay in place). The suspension has self-leveling capability.

These new proportions are achieved courtesy of the innovative STLA Frame EV platform on which the Ram 1500 Revolution BEV Concept is built. New intelligent safety systems and smaller, more powerful electric motors afforded the design team the ability to shift the cabin forward and increase cabin length. The 1500 Revolution BEV Concept features a cabin that is 102 millimetres (four inches) longer than today’s production truck for increased room and comfort while the bed length remains the same.

The interior is designed as an empty space which can be configured—a “one space environment.” The new STLA Frame architecture provides a more spacious interior without changing the bed size. Ram Track, a rail attachment/floor track system, provides tie-downs and flexible seat and consoles; it’s also in the frunk and bed. This setup allows for third-row jump seats:

The powered mid-gate features mounted jump seats with a removable lower section for placement in the bed or outside the vehicle. The mid-gate with powered glass enables a pass-through (and into the frunk) that can fit objects up to 5.5 metres (18-ft.) long with the tailgate closed.

The center console can be removed entirely or converted to a workstation surface (an idea now credited to Ford, but originating with the 1994 Ram 1500’s oversized center consoles). The seats are light weight so they can be moved easily, and have integrated seatbelts, grab handles, and speakers; the seats can fold flat, with extended recline, work, and conference modes. The setup can be maximized for limousine-like space or to carry cargo. 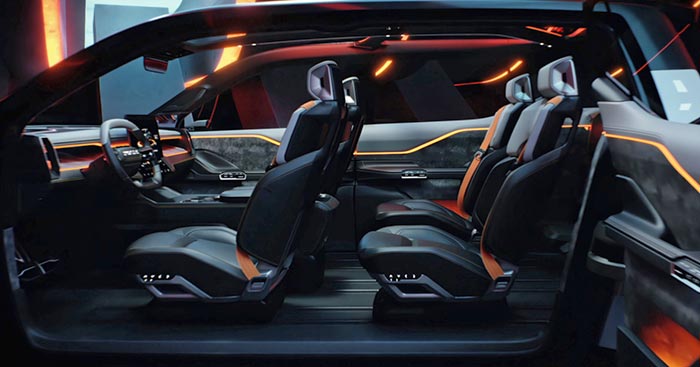 The “tuning fork” design stretches the length of the dashboard and goes on to the mid-gate. A touchscreen display with dual screens provides up to 28 inches of screen space; the lower display has three different positions (minimal view, extended view, and full  view) and can be detached and used in different parts of the truck. The upper screen can slide on the Ram rail attachment system.

Sustainability may not concern most pickup owners, but Ram still used a lightweight, resilient Grayslate Nanostone veneer and “Apple” leather, a bi-product from the apple industry, along with a textured floor composed of recycled rubber and cork particles.

The actual pickup is due in 2024, which may still be early enough to beat Tesla’s “Cybertruck.” Ford already has an electric pickup, and Chevrolet has shown its prosaically named Silverado BEV; Rivian is slowly producing critically acclaimed electric pickups (the R1T), and others are on the way.  The chief engineer of Ram, Mike Koval, told Automotive News that the production model would be shown “in the next couple of months.” The concept, in contrast, is a “visionary road map.”

Although this may sound gimmicky, but I truly hope the Ram EV has a Fratzonic sound chamber as well. I also don’t see the issue with the suicide doors as alot of pickup trucks already have them. To me, that design actually makes more sense on a truck, especially since this truck seems like it doesn’t require the front doors to open to allow the rear doors to operate. What I do hope to see is the return of some street performance trucks like the Ram Daytona or something like the Ram SRT10, because why not have a loud, beautiful 1,200hp street performance EV pickup truck to remind people just who Dodge is and always has been!

I’m really going to end up sounding like an EV fan but I honestly LOVE what the Mopar brand is doing with these EVs. The truck is beautiful even as a concept. I love the front cargo pass-through (I hate that word Frunk) and the three row seating is awesome. I don’t like the follow mode thing as I’m not a fan of autonomy in vehicles. I’m honestly interested in seeing what the 800v system will put out as far as power wise. I think it will easily outdo Ford and I’m wondering how it will stack up to the GMC vehicles.
Dodge is really planning big things in the EV world. I also saw this little clip on YouTube yesterday showcasing more of the new EV Charger.
https://www.youtube.com/watch?v=VLbLz_-Yooc
I think the brand is honestly going to knock this out of the park. Between them and General Motors, I think we are going to see another Golden Era of Performance vehicles that will be truly as exciting as the one we currently have and closer to that of the ’60’s & 70’s than ever before.

Ram should coin a new phrase instead of “Frunk”:

“Fargo” for “front cargo”, which is also in keeping with the legacy “Dodge Fargo” series of trucks.

There is so much here to excite everyone and many interests. How much reaches production is debatable, but this certIanly put Ram a time the top of the electric truck crowd as well as the next generation Ram traditional crowd. Amazing would be an understatement.

It’s beautiful, I will say that for it. And very futuristic. Kudos to Ralph Gilles for a cool design that shows they really let the designers use their imaginations.

Wildly expensive, likely to be trouble in a crash (seriously? No B-pillar?) and impractical for real truck uses is my assumption about the prototype. I cannot see as much of it making it into production form as you think, Dave. This is for people who want a truck-shaped electric *car*, not for the people who actually buy and use trucks for tasks like construction, hauling scrap metal, fixing plumbing, or painting houses.

I always wish Stellantis success. I hope this thing contributes to that success. If it does, however, I think it will be because it’s creating a new market segment for pickup-shaped cars, rather than replacing the traditional pickup.

Hi, Geoff… I thought I was pretty clear about the suicide doors not making it to production and how some of this is a disguise….

Of course, being a concept vehicle, as you say not all of it will make it to production. But in an interview with Ralph Gilles on 5thgenrams, Gilles clearly states that even though not all features will make it to production, many will, although not all of them at initial introduction of the Ram REV in 2024 (I assume that will be a model-year 2025 vehicle?). The have to keep a few new things in the queue for mid-cycle refreshes.

The suicide doors with no B-pillar are likely not making it to production, but I predict most of the work-truck features like the pass-through all the way from nose to tail for carrying long, thin items, the multifunction tailgate with extender, updated Ram Box, the interior work areas (fold-out table), etc. may well make it to production.

Typo correction for my reply above: “Pure BEV”, not “Pre BEV”.

Dave, are you aware that the upvote stars in each reply are not loading? At least not in the latest version of the Edge browser, nor Firefox.

Interesting. They show in Firefox. I’ll check the others. Usually if anything breaks, it’s in Safari!!

Use the Disqus box to weigh in with your thoughts! (It may take a moment to appear)
wpDiscuz
10
0
Would love your thoughts, please comment.x
()
x
| Reply