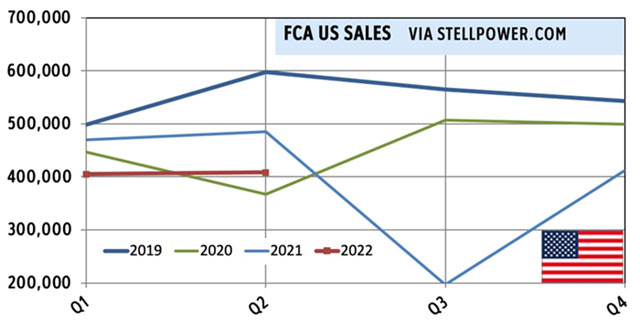 FCA US reported a drop in sales for the second quarter (April through June) of 2022, compared with Q2 2021. Fleet sales rose as a percentage of the total, as retail sales fell by 24% and total sales fell by just 16%. Despite this, FCA US actually did well against its peers and may have picked up some market share:

The one brand to make it through without problems was Chrysler, which saw sales nearly double. Other bright spots were sharp rises in Jeep Compass (54%) and commercial vehicles (13%); the Wrangler 4xe held onto its best-selling plug-in hybrid spot. Overall, FCA US sold 408,521 vehicles in the second quarter. The U.S. head of sales blamed supply constraints, saying demand was strong.

The new Jeeps did reasonably well for their prices: Wagoneer sold 10,220 and Grand Wagoneer sold 3,932. The Wagoneer sold better than the cheap Renegade or even the midrange Cherokee, which many believe will be dropped in mid-2023.

2 thoughts on “FCA US reports big drop in sales”