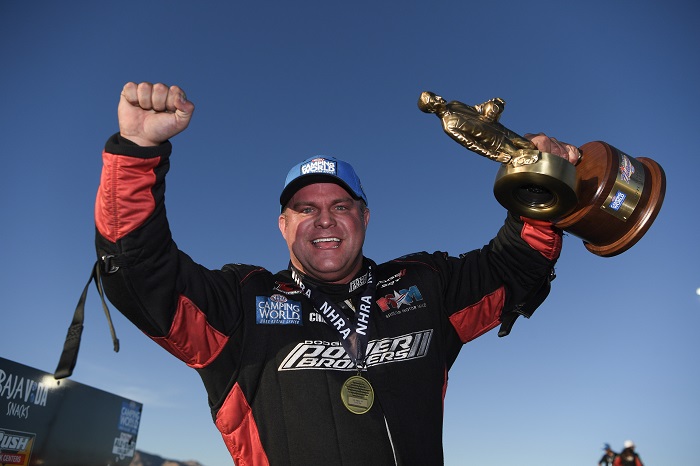 Matt Hagan came into the Nevada Nationals knowing that he had to put on a strong performance in order to keep his championship hopes alive and he put on the strongest performance possible – driving his Dodge Charger SRT Hellcat funny car to the win. Hagan beat rival Robert Hight, who is currently in the top spot in the championship chase, giving the Tony Stewart Racing driver a chance of winning a championship in the team’s first year of existence.

“(Crew Chief) Dickie Venables, Mike Nnutson and Alex Conaway, those guys are making some real power with this Dodge Power Brokers cars. It’s running strong. They’re putting a great hot rod underneath me,” said Hagan. “It’s kind of cool to come out here on Sunday and win on two holeshots and give my team that little extra bump of what we needed to keep going. Sometimes you gotta be a little lucky and sometimes you gotta be a little good.”

The final event of the NHRA Camping World Championship Drag Racing Series has a unique point format, offering more points than at the rest of the events on the schedule. As a result, Hagan has a very real chance of winning the title, but he needs Robert Hight to lose early in eliminations. 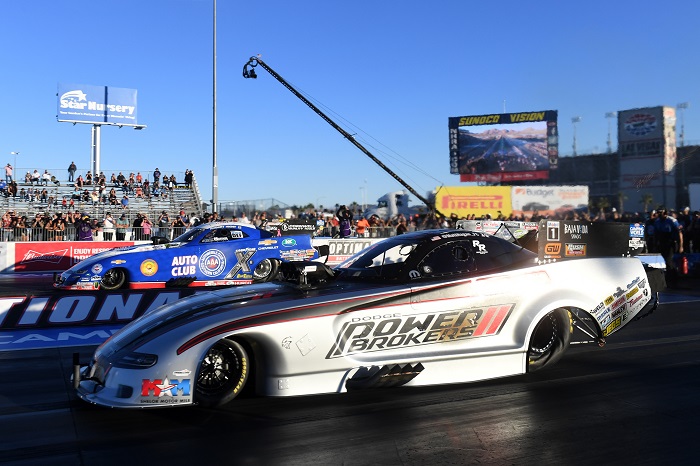 The funny car winner at the final event of the NHRA season gets 150 points for the win while the runner-up gets 120 points. The drivers who lose in the semis get 90 points while first- and second-round losers get 30 and 60 points, respectively. Drivers can also earn up to 4 points in each round for being the quickest car in the class during qualifying along with receiving up to 10 points based on their qualifying position heading into eliminations.

Hagan trails Hight by 63 points. While the points accumulated during qualifying could certainly come into play, Hagan needs Hight’s Chevy Camaro to lose in the first or second round of eliminations and Hagan needs to go on to win the event. Say that Hight loses in the second round and Hagan wins – there would be a 90 point differential from eliminations between the two. Even if Hight qualifies in the top spot and turns in some very quick qualifying rounds, that 90-point advantage in eliminations would likely allow the TSR Dodge driver to win the championship.

It should also be noted that Ron Capps – now driving a Toyota Supra – is 61 points out the lead, so he also has a shot at the title if Hight falters and Hagan struggles. However, if Hagan can keep his momentum through the final event, he has a chance at the title. He just needst Robert Hight and Ron Capps to lose sooner than later. 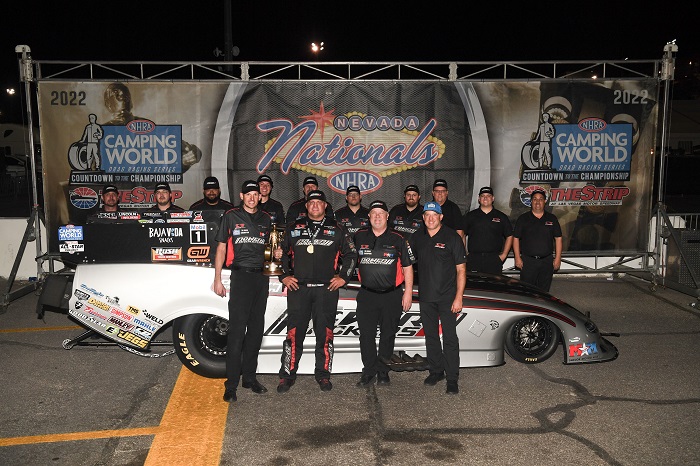 “We just gotta keep digging and working hard. Robert (Hight) is a tough customer. We’re gonna give all we got. We’ve had two good races going to the final in Dallas and then the win here. We actually have a new combo that we’re working with that they threw in there last night for the last run,” said Hagan. “I’m excited about what we found and how the car’s running and what we’re doing. I do feel the momentum building back up. I feel like these are our type of races, our type of conditions. I’ve done really, really well and won at Pomona a bunch. We don’t have anything to lose. We have to throw down and we have to scoop up as many points as we can and we have to be aggressive.”

The NHRA Auto Club Finals will be held at Auto Club Raceway in Pomona, California on November 11-13.