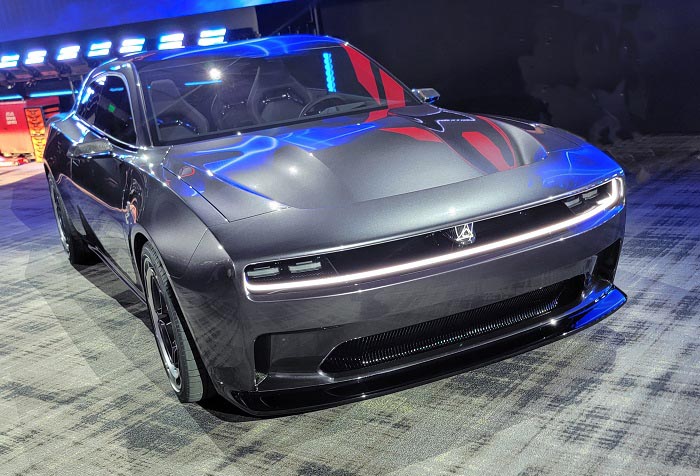 Electric motors can get quite hot while operating—and so can batteries when powering those motors. Battery-electric vehicle (BEV) makers have all spent a great deal of time and money on thermal management, as gasoline-vehicle makers did before them. Their solutions work well for most people, but there is likely room for more work by enthusiasts. That dovetails with one downside of BEVs—some enthusiasts are dismayed at the difficulty of upgrading the cars.

The two come together with the idea that people can customize their cars by upgrading thermal management.

Dodge has already brought out their Fratzonic exhaust system on the Banshee. On a regular car, exhaust systems take hot exhaust gasses from the engine and push it out of the back (or side!) of the car. An EV doesn’t have exhaust gases in the same way, but the batteries and motors do generate heat.

The “Fratzonic” exhaust system could help remove heat from the battery pack, using not just a sound chamber but a “Supercooler” blower system; it would have a coolant pump, like a Hellcat’s supercharger, sitting on top of the front electric motor system. This would be circulate heated coolant from the motors, gearboxes, and battery pack areas through front mounted intercooler-style radiator systems—and force air across the battery packs and through the “Fratzonic.”

That would bring back the beloved supercharger induction sound, while changing the Fratzonic system sound (and making it more functional). On cooler days, there could be visible vapor coming from the back of the car from the condensation from the heat transfer, making the Fratzonic more functional—which addresses some of the complaints about the one we saw on the Charger Daytona EV.

EIEIO LOL! I think he may have been responding to the guy below who was saying about ICE tech going away and all that kind of stuff.

Hey VBJ, Hope all is well. When I received that comment it appeared that it was a reply to mine. If not, I stand corrected (wouldn’t be the first time). Just too old to give a crap about batteries except for my T.V. Remote.

While ICE technology may be slowly become outdated, EVs still require cooling systems. Some of which are very reminiscent to the shape and functionality of a turbocharger or centrifugal supercharger. On EVs however, the cooling fan, or heating pumps, as they’re called have a dual purpose as they not only move air, but also move coolant. Not only would the “Supercooler” help to regulate EV battery and motor temps, it would also assist in the HVAC system of the car. As it stands, EVs currently use something called a Resistive heater to heat the cabin of a car on a cold day. That heater drains energy from the battery, which of course, consumes power and reduces range. Having something that can circulate warm coolant around the vehicle would reduce the amount of energy an EV heater would consume, thus actually improving range. As far as the dual use of the fratzonic sound chamber. Having the “exhaust system” actually exhaust a percentage of heat during times when the heat energy isn’t being recycled into the car during the colder months actually makes the system less gimicky. While the Fraztonic system is the company’s way of complying with the fact that EVs will be mandated to make some sort of sound, having it serve more than one purpose actually makes a bit of sense. The thing about the Dodge brand is that it’s an enthusiast-oriented brand. If the company can take something that would make the EV system more efficient and convert it to something that would not only add efficiency but also make it stand out from the rest of the EVs on the road, then why not? It goes right along with the fact that the new Charger EV has a multi-speed gearbox. Why? Not only does it give the EV more of the natural feeling of a car, they also extend range and performance. It’s actually not just wishful thinking about using old tech on EVs, it’s actually taking the tech that they are currently using on EVs and modifying it to be more appealing to the performance enthusiasts the brand currently caters to.

Use the Disqus box to weigh in with your thoughts! (It may take a moment to appear)
wpDiscuz
7
0
Would love your thoughts, please comment.x
()
x
| Reply