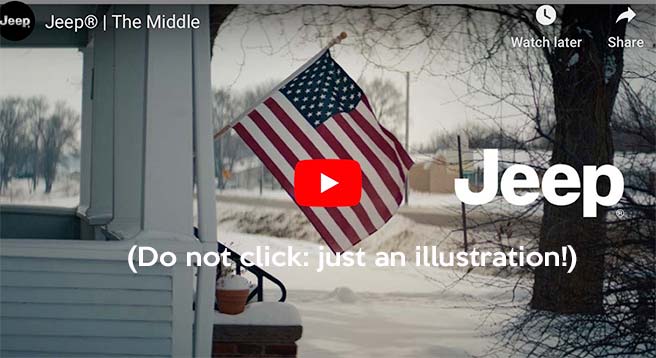 Bruce Springsteen and Jeep star in the two-minute “The Middle,” which will appear just once on TV, during the Super Bowl—ten years after “Imported from Detroit.”

[Dodge has removed this video from public view]

Springsteen worked with director Thom Zimny, writing and producing the original score with frequent collaborator Ron Aniello. Olivier Francois came up with the outline, emphasizing “meaningful and emotional connections” and “cultural relevancy” as Jeep hits its 80th anniversary (going back to the first Army vehicle, a mix of American Bantam and Willys).

Olivier Francois wrote, “Bruce Springsteen was instrumental in crafting this joint message. His experiences and perspective have often been called upon to bridge a divide. Now seems to be a time when a message like this is greatly needed.”