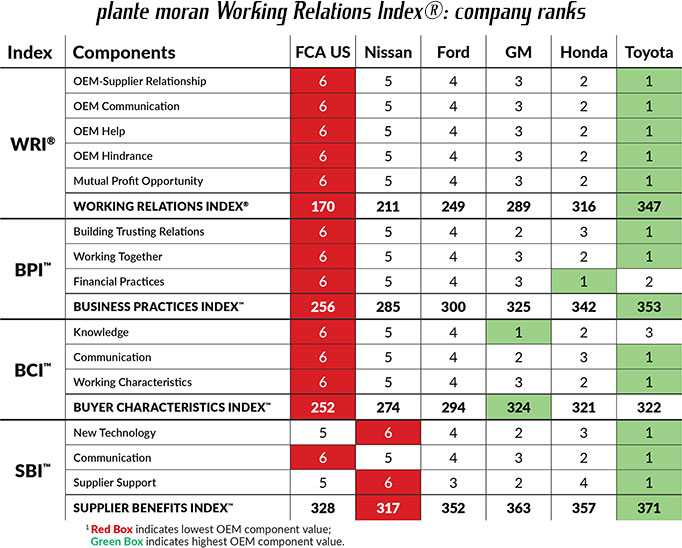 In the 1990s, Chrysler Corporation, though much smaller than GM, Ford, or Toyota, soared ahead with innovative cars and trucks. The company single-handedly re-created the moribund large car market with the LH series of cars, made the first profitable American compact car in years with the Neon, which outperformed every competitor by a wide margin while providing class-leading interior space, and dramatically changed the pickup truck to the point that sales tripled as soon as Chrysler was able to add production capacity.

Much of their success was due to the use of platform teams, but a good deal of innovation and cost savings came from SCORE, their supplier cooperation tool. Suppliers came up with ideas that lowered Chrysler’s overall costs, which could include more expensive parts, as long as the entire system, including production costs, was cheaper. To make that happen, Chrysler shared its profits with the suppliers; and they gave suppliers who came up with a new idea time to profit from it, rather than giving that idea to a different supplier. The company built trust with its suppliers, and as a result its cars gained new features and its costs fell—even as supplier profits grew.

SCORE is long dead, and Chrysler’s descendants do not seem to have tried to court suppliers over time. This matters because suppliers may not assign their best people to work with FCA US (today’s iteration of Chrysler), and may save cost-saving or innovative ideas for other companies. Some companies may choose not to bid on FCA US work if they can sell it Toyota, Honda, GM, Ford, or Nissan instead.

The rankings above do not show the whole story. While Toyota is unsurprisingly in the #1 space, given their emphasis on long-term relationships with suppliers, GM is #3; even the troubled Nissan is ahead of FCA US.  There are only two places suppliers see more benefits in working with FCA US than Nissan: new technology and, ironically, supplier support. 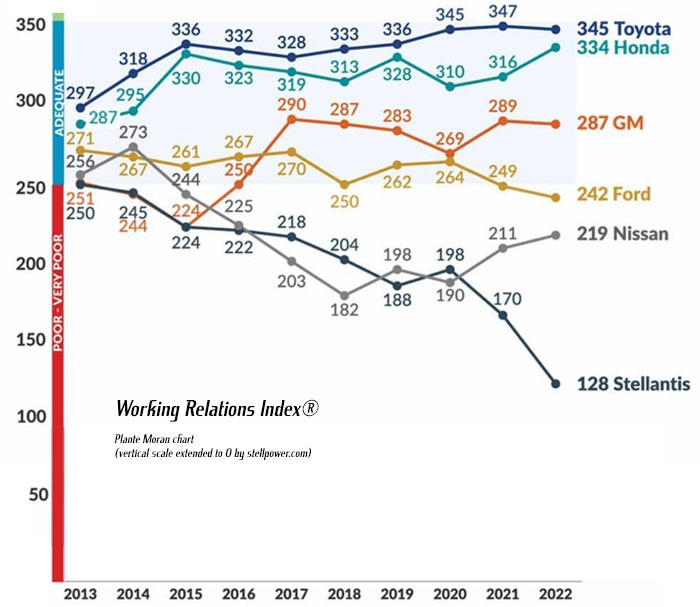 Looking at the graph over time, which shows actual index numbers rather than ranks, shows the rankings, which have FCA dead last, actually understate the problem. The gap between #3 GM and #6 FCA US is quite large, and has been expanding since 2015, when GM suddenly leaped up—due, no doubt, to Mary Barra’s leadership at GM, which started in the prior year. Since then, the gap between FCA US and just about every other automaker has grown ever-larger.

The study did not report on South Korean automaker Hyundai-Kia; German automakers Volkswagen, Mercedes, or BMW; or Tesla.  Article idea via Automotive News.

1 thought on “FCA US is dead last in supplier rankings, and why it matters”