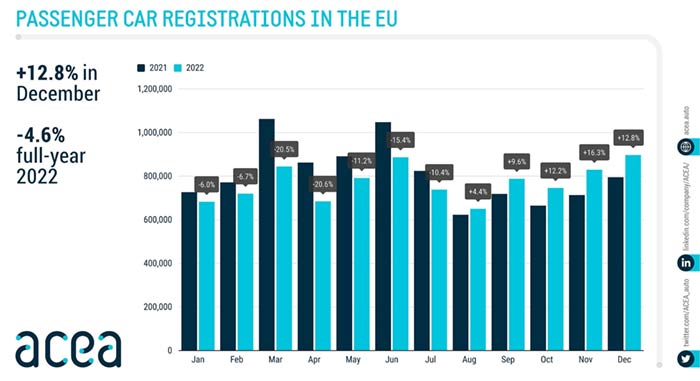 Stellantis had a bad 2022 in European sales, falling 14% and giving up market share to every manufacturer other than Jaguar and Mitsubishi. Jeep fell by 20%, the worst fall of any Stellantis brand.

Sales in Europe are dominated by the top four brands—Volkswagen (25% share), Stellantis (18% share), and Renault and Hyundai (9% share each); BMW and Toyota both claimed 7%, Mercedes 6%, and Ford 5%. From there the shares drop to 2% or less.

They aren’t unique. Some companies require you to pay $395 for ANY paint color – no free ones. Some have a single free paint color. Some package every single car with insane options like a $300 set of wheel locks (keyed lug nuts). Some charge $500 for floor mats… and $600 for a single key fob.

This is what happens when you start increasing price of vehicles 3 or 4 times a year.

At Ram they charge you extra for paint want Black Red and many other color’s other that plain white well that is 495.00 extra want the same paint on the bumpers well that’s another 495.00 bucks.

Plus the base price of the truck has gone up so high the options should be included.

Use the Disqus box to weigh in with your thoughts! (It may take a moment to appear)
wpDiscuz
4
0
Would love your thoughts, please comment.x
()
x
| Reply